A recent project in California may be the first of its kind-at least in the U.S.-in which large-scale batteries actually fired up a generator to restore grid operations without a power feed from the transmission network or backup source, the utility announced earlier this summer.

In May, the Imperial Irrigation District’s (IID) new energy storage system provided the electricity needed to get its 44-MW combined-cycle natural gas turbine going at the El Centro station. This is a big deal in the expansion of energy storage capabilities, proponents say.

“From where I sit and what I know, I’m not aware of anybody else able and willing to do so,” said Mirko Molinari, manager of distributed energy resource development for GE Power, one of the partners in the IID energy storage project. “It was not a simple task.” 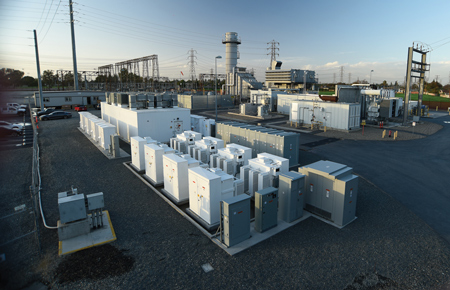 Energy storage systems play several roles within the grid connection, from load following to load smoothing to frequency regulation. Now, at least in this case and likely others to follow, it can play a startup role before converting back to absorbing power from the functioning grid.

“The biggest question is whether this is a game changer,” said Matt Roberts, vice president of the Washington, D.C.-based Energy Storage Association. “No, but it’s one of the new value streams this system can deliver.”

Juggling all of those streams is exceedingly complex, GE’s Molinari pointed out. Software and control systems must wade through all the immediate and intermittent inputs of a grid system which is processing flow from renewables as well as facing resiliency challenges once a gap develops in electron flow.

Historically, an operative grid would be restarted by a backup diesel generator or some other form of generation, giving the main turbine time to get going again and synchronize and keep frequency steady on the system.

The IID event proved that energy storage essentially could “jump start” the system. The process sounds something like what happens to a car with a dead battery but not exactly.

“Turbines need to rotate at certain speeds to generate the right frequency,” Molinari pointed out. “If you have more production than load, the frequency goes up. If more load then production, frequency does down.

“You need to put the energy somewhere to stabilize the grid, otherwise the frequency goes up and down too much.”

This reconciliation is crucial, of course, because customers expect reliability from their grid. The black start capability could prove crucial because those same customers also want renewables and resiliency.

“When you design the grid, you design it to be reliable; when something goes wrong, you go to resiliency,” Roberts noted. “Storage plays a role on both sides of those equations.”

Black starting means not only that energy storage gets deployed on the grid, but that it can get the grid going again. Industry insiders believe that is a huge deal going forward.

“Batteries degradate; the point is how much and how do you use it,” GE’s Molinari said. “You need to be able to do it in the context of the system and not just batteries as a standalone.”