Deregulation of electricity markets created a whole new relationship between customers and power suppliers. So a matchmaking industry was born to help connect those two ends of the competitive grid.

The matchmaker is known as the ABC—for Aggregator, Broker and Consultant—of the deregulated markets in nearly two dozen states. And that relatively new sector has grown to broker more than 70 percent—or about 489 terawatt hours (TWh)—in estimated competitive electricity sales last year, according to a broad new study conducted by Energy Research Consulting Group (ERCG) for The Energy Professionals Association (TEPA).

The study, which communicated with about 130 firms in the aggregator-broker-consultant industry, found wholesale optimism for growth in the coming years. The ERCG estimated that overall revenue for ABCs was about $1.7 billion last year and should grow about 3 percent annually to $2 billion in 2020.

“The market has spoken,” Young Kim, principal at Boston-based ERCG, said about the report’s findings. “Customers want a third-party intermediary”(and)”suppliers are recognizing that this is a valuable channel. This means they don’t have to go and hire sales people internally. This is a way for them to be more efficient.”

Kim’s words are music to the ears of companies in the ABC sector, which was created in the gap created between generators and end-use customers when utility deregulation gained momentum beginning with the Energy Policy Act of 1992 but gathered more steam after much of Texas opted for a competitive market 14 years ago.

Today, independent firms like Reliant Energy and Direct Energy have grown in the wake of that sea change within deregulated states. The ERCG report indicates that brokers are flourishing as the “Hitch” (to borrow a movie analogy) in the supplier-customer engagement. For instance, deals transacted by ABCs now account for 65 to 70 percent of non-residential sales and 40-45 percent of residential sales, according to the report.

The state with the highest penetration of brokered electricity sales volume is New Jersey at 84 percent. California, which has some competition but also is largely still a regulated market with giant utilities such as Southern California Edison, was lowest at 37 percent.

TEPA President David Roylance, who is also CEO of Prism Energy Solutions in Houston, praised the ERCG study for its comprehensive take on a relatively new industry. The biggest thing was to get a handle on statistics involving the ABC part of the competitive sales market and now going forward to build on that understanding, he said.

“In the 15 years I’ve been associated with the competitive retail market, I’ve not seen a study that tried to provide insights in what their market is doing, what is happening with ABCs,” Roylance noted. “Now that we have that insight, we can follow up with other market participants, such as regulators, customers and suppliers.”

The end game, he added, is to ensure that ABC industry is commonly defined, detailed and transparent.

“I think standardization is a part of it,” Roylance said. “There is very little barrier to entry to becoming a broker”Through standardization, through codes of conduct, through education we can improve the standard of service.”

ERCG’s Kim believes there is growth potential beyond the additional $300 million in annual revenue expected by 2020. He sees Nevada as potentially ripe for expansion of competitive electricity sales.

Roylance agreed and saw other possible expanders out west. Even in Texas, some municipal markets such as Austin and San Antonio are still closed to competition.

“We’re close” to Americans having more choices for power providers, he said. “All it really takes is California.”

Much of that state reconsidered deregulation after the wholesale gas pricing scare of the early 2000s. ERCG’s Kim countered that customers in various states with regulated monopolies are ready to reconsider again.

“Utilities have a stranglehold on the customer base,” he said. 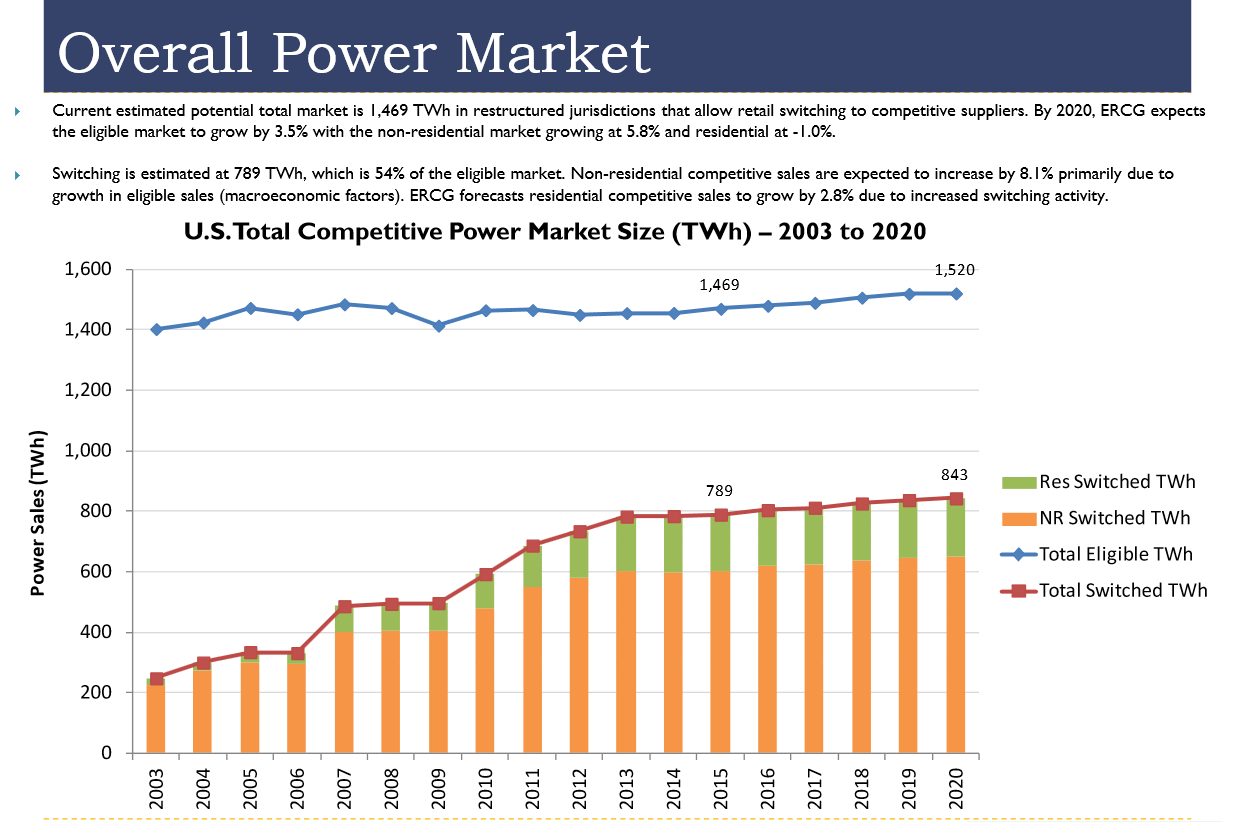