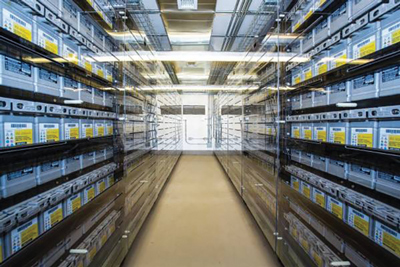 This just in: Energy storage isn’t waiting around to be the next big thing. It’s moving now.

On Tuesday, AES and Siemens announced a joint venture company called Fluence, which will be focused on energy storage globally. The two parent firms plan to offer storage solutions in up to 160 countries.

Meanwhile, an earlier flurry of merger deals snapping up energy storage-related companies has industry insiders wondering whether the sector may soon reach critical mass in the financial space.

Aggreko’s $52 million acquisition of Younicos is big for both firms but may not shake up the energy world. Considered together with nearly a dozen similar moves in the past year, however, the buy-up of storage, battery and control technologies is starting to look significant, indeed.

“On the business side, if you ask any utility and any developer, they will tell you that yeah, storage is the game changer,” said Janice Lin, founder and CEO of clean energy-focused Strategen Consulting. She is also chair and co-founder of the Energy Storage North America conference, which is scheduled August 8-10 in San Diego.

“There are certain places in the world—and California is an example—that have started focusing on the role that this asset case can play in the grid,” she added. “They are really jumping on the bandwagon to make storage a mainstream resource.”

Aggreko traditionally has been a temporary power supplier and generator renter but is clearly aiming for more diverse offerings. The purchase of Younicos connects Aggreko to control software for grid battery systems.

Younicos itself had previously raised more than $75 million from investors globally. It currently has a portfolio of more than 200 MWs in installed energy storage systems, according to reports. And, although it had yet to turn a profit recently, its buyer said the deal brightens the future for both units.

“Together we are a powerful combination,” Aggreko CEO Chris Weston said when the deal was announced earlier this month. “Our scale, fleet and global presence, coupled with a smart energy capability, will allow us to open up new markets and provide our customers around the world with a reliable, cheaper and cleaner source of energy.”

Aggreko-Younicos is just the latest of energy storage acquisitions made in the past year. Two months ago, Wärtsilä closed on its purchase of Greensmith Energy Management Systems, Inc., another startup which develops energy storage software and integration services.

Prior to that, global giant Enel acquired Demand Energy and Ormat bought Viridity Energy, both deals in January. The previous year also saw these moves: Engie for 80 percent of Green Charge Networks, Doosan for 1Energy Systems and EDF for Groom Energy.

Many utilities already hooked up the terminals. Lin noted that Southern California Edison has put close to 400 MW in storage capacity under contract over the last two years, while San Diego Gas & Electric announced in April it signed five contracts totaling 83.5 MW worth of battery facilities.

“We’re already at the tipping point,” Lin said. Energy storage can be engaged as a generation or a transmission source, offering a unique variety of services, she added. “Savvy global players are recognizing that storage needs to be part of the mainstream toolkit.”

The area lagging, she noted, is in market design on the policy and regulation level. Regulators in many states are not sure what to make of energy storage, despite the financial and field momentum.

Energy storage is not conventional generation or transmission, so monetizing it can be complicated for regulators to consider, she noted.

“At the end of the day, market design and transformation happen because of people,” Lin said. “The way to overcome that (lack of market design) is to help folks to understand what a gold mine they are sitting on.”

On the business side, companies such as Aggreko, Enel, EDF and Engie seem to understand that completely. Time will tell if they were right.