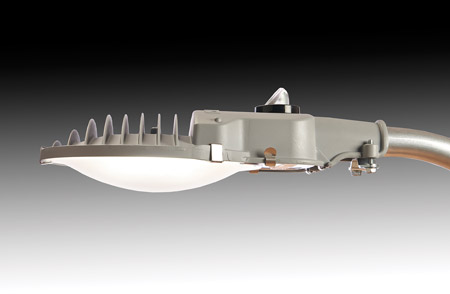 About two years ago, an electric cooperative in Spokane, Washington, began researching the benefits of LED technology.

“The money we save in energy is important, but the money we save by not changing lightbulbs or photocontrols as often is even more significant,” Osborn said. “We figure that we’ve been sending a lineman out to service each HPS area light about every five years, and that has been a significant source of expense for our co-op. Inland Power’s service territory is large, so some of our bucket trucks need to travel 100 miles to change lightbulbs.”

Osborn wanted to evaluate different LED-based alternatives to HPS, so he invited the co-op’s lighting distributor, General Pacific Inc., to demonstrate an AreaMax outdoor LED area light fixture manufactured by Evluma. Subsequently, Inland Power installed a dozen of the lights at the homes of board members, co-op managers and others as a test.

“We installed both 40- and 70-watt versions to replace 200-watt HPS fixtures,” Osborn said. “As nice as the 40-watt was for some uses, most people wanted more light, so we made the decision to standardize on the 70-watt versions.”

Inland Power and Light Co. selected Evluma based on multiple factors, he said.

“We decided that the most economical way to change out the fixtures is to hang a new LED light when we get called in to service the old HPS light,” Osborn said. “So we budgeted for a certain amount of change outs per year-about 300 lights.”

Inland Power General Foreman Mik Cole prepares to install a new AreaMax in place of the old HPS on the pole behind him. The cooperative will have converted some 800 HPS area lights to the LEDs by the end of 2015.

The economics of the changeover became even more attractive when the Bonneville Power Administration (BPA), Inland’s electricity supplier, agreed to give the co-op money back as part of the BPA’s program to reward steps taken to conserve energy in the region.

“We figure the first time we don’t roll a truck for repairs is when the light will pay for itself,” Osborn said.

Evluma’s AreaMax has features to reduce co-op maintenance costs that other LED area lights don’t have, such as Photocontrol Failsafe operation. The light contains a control module that calibrates and then tracks the local day or night cycle such that should the photocontrol fail (which can happen every five years or sooner in normal operation), the light continues to turn on and off as though the photocontrol were functioning. There’s no need for the co-op to change out the photocontrol with a new one.

“We like the failsafe feature because it ensures that we don’t need to go out to the site to replace anything for the full lifetime of the fixture, which is warranted by Evluma to be service-free for at least 10 years,” Osborn said.

The process with other lights typically includes replacing the photocontrol along with the lightbulb when either one needs service. The failsafe feature gives Inland Power linemen the confidence to transfer the old functioning photocontrol from an HPS light being replaced to the AreaMax, which saves the co-op additional component costs.

The light has other features that appeal to linemen, as well.

“The product’s lightweight and sleek design makes it a lot easier for our linemen to hang compared to the old HPS lights,” Osborn said.

Another linemen-friendly feature is Bluetooth wireless control. Linemen can turn the lights on or off and vary the brightness using a handheld key fob or a Bluetooth-enabled notebook PC or tablet.

Linemen can use this feature to test the lights during the day, and the co-op’s meter readers can use it to enable or disable the lights easily when homes change ownership.

Inland Power will have converted some 800 HPS area lights to the Evluma AreaMax by the end of 2015.

Dave Tanonis is vice president of sales and marketing at Evluma.