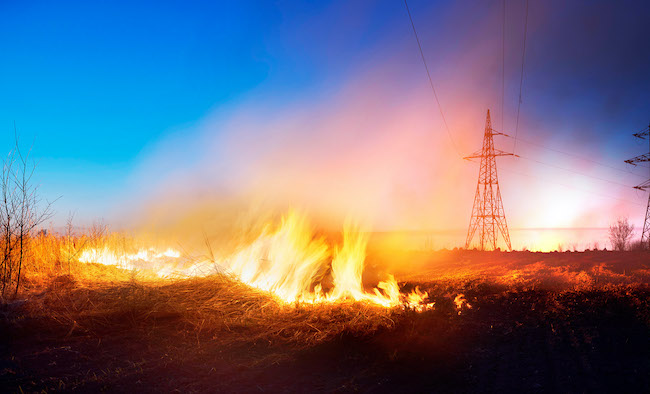 In recent years, the wildfire season on the U.S. West Coast, in Australia and other parts of the world has been arriving earlier and earlier with evermore devastating results. Tragically, these wildfires have been the direct cause of significant loss of human life, billions of dollars in financial impact and the destruction of sensitive natural areas and wildlife habitat. For some power utilities, wildfires linked to their operations have also led to substantial liabilities.

As such, utilities are actively exploring options to reduce the risk of their equipment starting wildfires, whether through malfunction, natural phenomena such as electrical storms or normal operations in abnormal situations. One area of potential risk that utilities have identified are surge arresters.

Surge arresters provide an important function on the electrical grid by protecting critical (and expensive) electrical equipment from overvoltages.  The source of these overvoltages can come from lightning, routine switching events and normal everyday utility operations. If the overvoltage is particularly severe in terms of size or duration, the surge arrester is designed to sacrifice itself to protect the downstream electrical equipment. This surge arrester self-sacrifice can be quite dramatic with the violent expulsion of hot gasses.  As a result, such events run the risk of causing damage to property and to persons who might be near the surge arrester when it ‘pressure relieves’ (i.e., explodes), and could, under the right circumstances, start a fire.

Thankfully, these rapid pressure relief events are extremely rare, but their risk profile fits the definition of what is known as a ‘black swan’ event — one that has a low probability of occurring but has potentially serious consequences.

A few years ago, one of Hitachi ABB Power Grids’ customers with operations in California expressed a strong desire to reduce this risk, and actively sought a solution to the challenge of reducing the risk from wildfire through the elimination/control of possible fire igniting sparks. From this desire, the company’s Spark Prevention Unit (SPU) was born.

What the customer was seeking was a distribution voltage-level surge arrester that would meet the exemption standards established by CAL FIRE, the California State Government Agency tasked with serving and safeguarding the state’s citizens as well as protecting the state’s property and resources.

Hitachi ABB Power Grids had explored this topic before, having developed technologies intended to maintain control of the pressure relief event after it occurs. However, completely eliminating the chance of the surge arrester producing a spark was a more daunting challenge. The approach employed by the team was to disconnect and isolate surge arresters at risk of malfunctioning as quickly as possible. This is accomplished by monitoring the current and the thermal load of the surge arrester. If a thermal overload is detected, the SPU interrupts the current flow and disconnects the surge arrester, eliminating the risk of arcing, sparking or ejection of hot particles that may have the potential to start a wildfire. In this way, the SPU can eliminate one potential fire hazard from utility’s distribution networks.

The product was subsequently approved for use with medium-voltage surge arresters, receiving a vegetation clearance exemption from Cal Fire, and a ‘spark-free’ designation according to class A of Australian Standard AS 1307.2. These designations signify that the SPU is suitable for use in extremely arid, wildfire-prone areas.

Since these recognitions, tens of thousands of SPUs have been deployed in California and other locations in the mountain West of the United States, where the risk of wildfire is a particularly grave concern. While by itself the SPU can’t eliminate all wildfire risk, customers are looking to the SPU as a key element of their overall wildfire mitigation programs.

The SPU can be deployed on distribution systems in every kind of terrain and whatever the location. This includes remote, fire-prone areas where it offers out-of-sight, round-the-clock protection as well as in more populated urban areas that eliminate the risk of catastrophic failure to the general public.

Interest is growing in other parts of the world as wildfires continue to increase in frequency and ferocity. The same approach that makes the SPU so effective could also be beneficial in other applications, including helping ensure the safety of linemen and other maintenance personnel and improving overall system reliability. Products such as the SPU can be an important element in utilities’ overall fire hardening strategies, which are recognized as appropriate to include in the rate base, enabling utilities to recoup that investment.

Ultimately, reducing the risk of wildfires is a complex, multi-faceted, long-range undertaking. However, given the risks to people and property, utilities are looking for every opportunity to reduce or prevent this hazard, and limit their associated liability. Keeping the sparks from flying is one potential approach that is generating interest.

Michael R. Godfrey is the Business Development Manager for High Voltage Components within the High Voltage business unit of Hitachi ABB Power Grids. Mr. Godfrey has over 30 years of experience in the electricity industry, both on the utility and vendor sides of the business. He holds a Bachelor of Science in Electrical Engineering from West Virginia University and an MBA from the University of Pittsburgh.