Best and Brightest Take the Lead at DistribuTECH 2018

Diffusion, decentralization and distribution. Those may be terms of engagement for the power grid industry of the future, and they certainly came together as one for DistribuTECH 2018 in San Antonio.

More than 11,400 professionals from 72 nations attended the nation’s biggest annual conference and exhibition for the electric transmission, distribution and smart grid sectors. Those taking breezy strolls along the Riverwalk were as likely to be engineers, transmission planners or grid-edge experts as everyday tourists in late January.

During the day, however, they were walking the polished floors of the renovated Henry B. Gonzalez Convention Center, sitting in a session, taking a meeting or stopping by any one of more than 530 exhibitors featuring solutions for every challenge from substation automation to smart metering and beyond.

The challenge of transformation was taken up early during DistribuTECH’s keynote address. Hurricane Harvey had hit hard just south of San Antonio only five months earlier, and many in the audience had also dealt with Irma and/or Maria as well as wildfires, bomb cyclones and the good old-fashioned twister.

That’s more destruction than any electricity provider wants to face, but they did it with commendable speed and safety. Add to that the future change in decentralization, digitization and distributed energy and you’ve got enough virtual and real storms to last a lifetime. 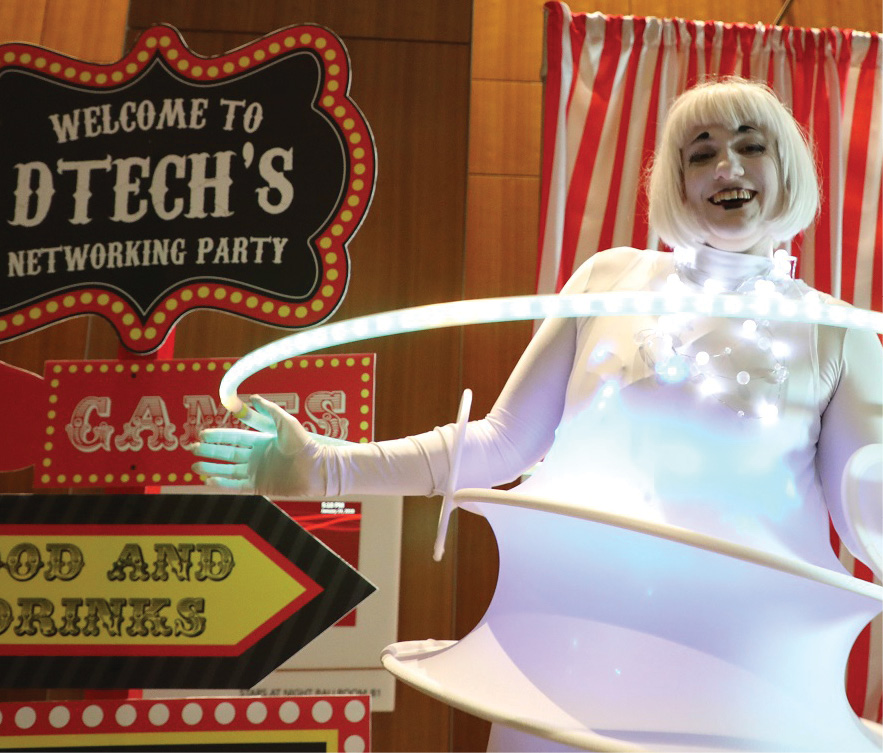 Entertainer sparkles at the networking party

“It’s a struggle just to keep the lights on during these events,” Teresa Hanson, Editor in Chief of POWERGRID International and advisory committee chairwoman for DistribuTECH, said in her introduction. “And while technology is the cause of some disruption, it is also the answer to survival.”

Itron CEO Philip Mezey noted the advancing challenges that utilities and vendors face from aging infrastructure, aging workforces and ever evolving technologies. His company is investing in open technology platforms, moving into the cloud data-wise and taking hold of all the predictive benefits these investments might hold.

From Transactive to Topical to Media Buzz

DistribuTECH walked the walk this year, showing its willingness to change within the gleaming halls of the recently renovated Gonzalez Center. One of those new touches included a track devoted to energy storage as well as a mega-session on the transactive energy marketplace, otherwise known as the Blockchain Gang.

Another mega-session went the topical route, focusing on how four utilities responded to the historic weather strikes from hurricanes Harvey, Irma and Maria along the U.S. Gulf Coast and the Carribbean. Representatives from AEP Texas, CenterPoint Energy, Florida Power & Light and AES shared their stories from Texas, Florida and Puerto Rico.

Nearly everyone inside the packed room figured there were hundreds or thousands of downed power lines, flooded substations and plenty of mutual assistance involved. What surprised many were the more isolated and unknown anecdotes of dealing with the harsh elements in a storm’s wake.

AEP Texas’ Frank Espinoza revealed that one of the greatest aggravations workers faced were humungous mosquitos. He recounted how some customers complained about the pace of restoration, so in response AEP Texas uploaded a video showing countless hordes of bugs surrounding a work truck.

“The chatter started going away,” Espinoza told the crowd to no small amount of empathetic laughter.

The good kind of chatter was huge at DistribuTECH 2018. Hundreds of meetings were taken, dozens of deals got announced and thousands of introductions made during the three days in San Antonio.

#DTECH2018 also was all abuzz on social media, with more than 11,000 tweets and 1.2 million impressions. Social media influencer Tamara McCleary, while admittedly not a grid expert, nonetheless challenged the audience to adapt and embrace changes coming to not only their sector but all industries.

“Where are you failing to see the future?” McCleary asked. “We think if we avoid Twitter it’s all good. No it’s not; people are already talking about you.”

Taking the offensive on that conversation is “about being real, being authentic,” she added. 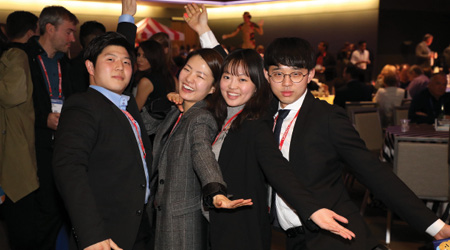 Dozens of companies used their own venues and POWERGRID International’s website to announce new products, ventures or partnerships to the world. Schneider Electric detailed its new microgrid project with the city of Milford, Connecticut, as well as a technical partnership with startup Dynamic Energy Networks, which is seeking energy-as-a-service deals and backed with a $500 million capital commitment from the Carlyle Group.

There was plenty more where that came from at DistribuTECH 2018. The news was almost too much for industry reporters to keep up with from morning to evening, but they soldiered on nonetheless. DistribuTECH was the place to make news, make deals and make friends.

The latter was part and parcel of every hour at the event, whether it was impromptu conversations on the exhibit floor or dancing and fun in the ballroom. Networking is as much a part of the event as sessions, Utility University or briefings, so each of the days ended with receptions or parties such as the “Step Right Up” celebration.

Many of the regular sessions were full, both of attendees and probing questions after the presentations. In the IoT-SmartCities session called “It Takes a Village,” Black & Veatch Chief Operations Officer Fred Ellermeier moderated a panel including leaders from Chula Vista, California, Newport, Rhode Island, and Charlotte, North Carolina. The three cities worked on smart city innovations that also included their respective utilities, such as San Diego Gas & Electric, National Grid and Duke Energy.

Those utilities jumped out at the opportunity to help their cities develop smart city technologies to spur both innovation and efficiency.

“Now retired CEO Jim Rogers really wanted to have a legacy project in Duke’s hometown,” said Robert Phocas, director of sustainability for the city of Charlotte. 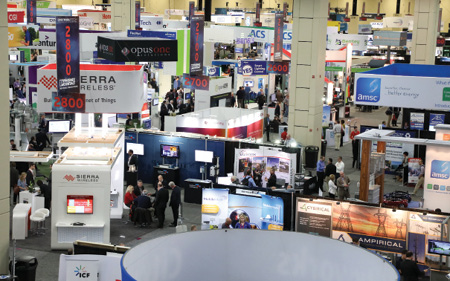 Overhead shot of the Exhibit Hall

At the same time, Ellermeier recounted recent Black & Veatch research indicating that too many utilities are playing too passive a role in the smart city revolution. More needs to be done.

A Feast for the Eyes and the Mind

DistribuTECH also offered plenty to catch the eye while walking the halls and rooms of the Gonzalez Center. The hall itself was mightily new and improved from only four years earlier, thanks to a $350 million renovation and upgrade.

Another new feature was the giant video screen adorning the entrance to the exhibit hall. And then there was Nashville-based sketch artist Emily Carlton, using her talents to create literal translations turned artistic interpretations of various sessions, including the keynote and IoT-Smart Cities. The sketch art was sponsored by Sensus.

Panelists for utilities talk about hurricane response and restoration during one of the megasessions.

Utilities are always the lifeblood of DistribuTECH, with 316 represented at this year’s event. Forty-nine of those were official Utility Partners, meaning they sent at least five and usually more employees to the conference.

“DistribuTECH is my No. 1 conference I attend every year and I appreciate being part of the utility partner program where we can send unlimited staff,” Sacramento Municipal Utility District (SMUD) board member Nancy Bui-Thompson said during the event. 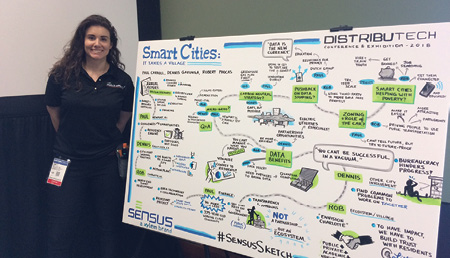 DistribuTECH is taking the Big Easy next year, rolling into New Orleans from Feb. 5-7, 2019. Stay tuned or go to distributech.com and elp.com for more details. | PGI