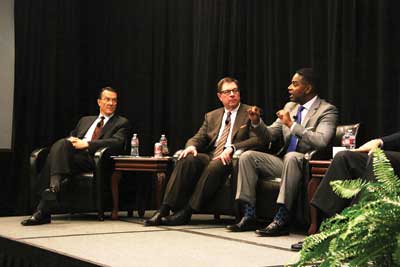 Theodore “Ted” Craver, who has guided West Coast utility giant Edison International for the past 8 years and is seen as an industry thought leader, will retired as CEO and chairman in September, the company announced.

Craver‘s retirement will be effective September 30 in keeping with Edison International’s practice of CEOs stepping down upon reaching age 65. The board of directors elected Pedro J. Pizarro to succeed Craver as CEO, while independent director William P. Sullivan will become non-executive chair.

“Over the last several years, we have repositioned Edison International and developed the next generation of leaders capable of successfully navigating the enormous changes in our industry,” said Craver in a statement. “I am proud of what our team has accomplished for customers and shareholders. This year we are delivering an 8 percent reduction in customer average rates, and Edison International’s market value is higher this month than at any time in our 130-year history.”

Craver was named president of Edison International in April 2008 and ascended to the CEO and chair posts four months later. Edison is parent company for Southern California Edison, one of the nation’s largest electric utilities.

Earlier this year, he was awarded the Edison Electric Institute‘s Distinguished Leadership Award by his industry peers for his years of contributions and commitment to the electric power industry. Electric Light & Power magazine named Craver its Large Utility CEO of the Year for 2014.

“Ted has been an outstanding chairman and CEO and has transformed Edison during his tenure,” Edison International lead director Brett White said.

“With Ted’s pending retirement, we took the opportunity to further our desire for excellence in corporate governance by separating the roles of chair and chief executive officer,” White said. “Bill Sullivan is the retired CEO of Agilent Technologies, where they also use a split role governance model. We are highly impressed with Pedro’s leadership capabilities and excited to have such a quality executive to succeed Ted as CEO.”

Craver said, “Pedro is a dynamic leader who has been the top executive at both our utility and competitive businesses. He grasps the changes that are reshaping our industry and has the talent and leadership skills to convert these opportunities into sustainable growth for Edison International.”

“I am honored and excited to be selected by the board to lead Edison International into the future,” Pizarro said. “We are better positioned than ever to be a trusted leader in electricity, renewable energy and energy services.”

In last year’s Electric Light & Power article about the CEO of the Year Award, Craver was asked about his leadership approach and interacting with employees.

“Truth be told, it is the contact with our employees that consistently rescues my mood. I’ve lost count of the number of times I have gone into an employee roundtable, on a facility tour or simply gone to the cafeteria or walked the halls where I come away feeling re-energized and recommitted,” Craver replied.

“I think it is because it makes me get outside of myself and whatever I’m thinking about and gets me into thinking about what is important to them. As human beings, perhaps especially as CEOs, we can become too self-absorbed.”

Before joining Edison in 1996, Craver served as executive vice president and corporate treasurer of First Interstate Bancorp and held positions of increasing responsibility in capital markets, sales and trading, and corporate development throughout his 23 years in the banking industry.