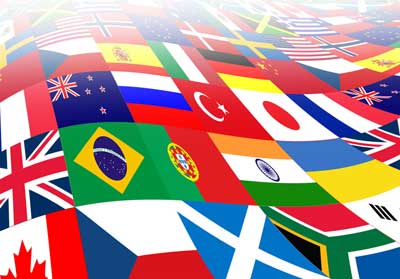 During the past decade, the electric utility industry has been slowly and quietly developing an international standard for information exchange.

The initial pieces were developed at the International Electrotechnical Commission (IEC) as IEC 61970, and this standard now contains all of the elements necessary to describe an electricity grid, including classes and attributes for transmission lines, breakers, transformers, power generators and load extraction points. The standard defines a model that is not simply static; it also can describe the state of the system at any given time by using model variables for elements such as line limits, power flows, load schedules, plant generation levels, equipment outages, and a wide range of supervisory control and data acquisition (SCADA) information.

A second standard, IEC 61968, was developed in parallel to IEC 61970 to describe details of the distribution system, such as customer and meter information along with trouble call and crew management information.

Like IEC 61970, IEC 61968 also can capture time series information and can be used to hold meter usage data and customer bills.

More recently the need to model wholesale markets was identified, and a third component, IEC 62325, was developed for this purpose.

The California Independent System Operator (ISO) was one of the first North American ISOs or regional transmission organizations (RTOs) to adopt the CIM with its Market Redesign and Technology Upgrade project.

Since 2009, all major functional areas have relied on the CIM standard and its extensions.

The Electric Reliability Council of Texas (ERCOT) found itself in a similar situation with its Nodal project when searching for an integration method to manage some 4,000 data exchanges.

ERCOT determined that the “only way to complete integration in time was to use the CIM as the foundation to maintain, distribute and exchange the data,” according to a presentation on “CIM and Utility Integration” presented by Curtis Crews of ERCOT and Margaret Goodrich of Project Consultants LLC during an EMS Users Group.

PJM Interconnection recently completed its Advanced Control Center project, where the CIM was selected as the foundation information model for messages.

The CIM has been used successfully to transfer data between regional markets, as well.

And although not every ISO or RTO has migrated to a CIM-based system, most share that goal. For example, NYISO plans to migrate its market and energy management systems to a single CIM-based platform, according to NYISO.

Many utilities also have realized the benefits of the CIM related to system interoperability and smart grid transformations.

Oncor, a transmission owner and operator in Texas, must exchange transmission data with ERCOT and put a CIM data exchange process into production in 2009.

DTE Energy used the CIM as a central part of its enterprise semantic model for the integration of new smart grid information and implemented related meter reading and maintenance services.

Progress Energy also has had success using an advanced integration architecture rooted in the CIM and implemented reusable services, replacing its old interfaces.

More system and transmission operators, distribution companies and energy service providers will join these pioneers and recognize the importance and benefits of using the CIM standard in the form of easier, more-standard data exchanges, which lead to reduced implementation and operational costs. 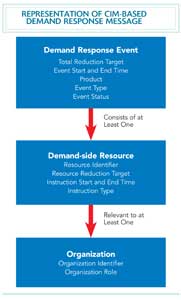 Activity to create a standard for electricity end users does not have the clear path demonstrated by the segments of the industry that currently benefit from the CIM.

But there have been attempts. Numerous proposals to define information flowing to and from homes and businesses to control and report on electricity usage have appeared; however, the form has been primarily vendor-specific solutions not rooted in any open standard.

So can the CIM be used to deliver electricity information?

The CIM was developed to make transactions between utility systems easier to design, build and implement.

As a natural extension to this success, North American ISOs and RTOs developed extensions to the CIM to support traditional demand response signals.

This work was delivered through a North American Energy Standards Board process and incorporated into the Smart Grid Interoperability Panel.

A visualization of the main demand response control message is shown in the figure on Page 28.

These CIM extensions are a concrete example of the use of an open and industry-focused standard proposed for electricity consumer processing.

And although focused on wholesale markets, there is nothing in the resulting model definitions that constrains activity to bulk-power transactions.

American Electric Power (AEP) was one of the first utilities in the United States to consider the CIM seriously as an option for customer communications.

AEP’s gridSMART project was initiated as a comprehensive approach to providing better service and lower costs to customers while allowing customers better control of their energy usage.

With the CIM as a foundation, extensions were developed to handle customer meter data, end-use device controls and responses and real-time pricing information, Goodrich said.

IEC working groups have been busy taking the developments from these two efforts and incorporating them into the CIM.

This process was designed so all stakeholders have the opportunity to review proposed changes, and most of those goals have been met.

The next release of the CIM should have these demand-side extensions incorporated and available for implementation by the industry.

When published, this new CIM will become a landmark: It will be the first appearance of a model for electricity customer information that is open (meaning the standard is not a vendor’s proprietary solution) and rooted in a well-established industry standard.

But the CIM is not the clear answer to filling the gap for demand-side communications.

Lawrence Berkeley National Laboratory developed the OpenADR protocol and piloted it in California to much success.

Since these initial steps, the OpenADR Alliance was formed to promote the use of this standard and evolve the standard based on the needs of the industry.

OpenADR relies on open standards, but not necessarily those with high levels of adoption in the electricity industry.

Despite this, OpenADR has many advocates and is making strong progress with adoption.

Members of the IEC and OpenADR Alliance realize interoperability is key and have formed the CIM-OpenADR Harmonization working group under IEC TC57 to develop a mapping between the two protocols.

The CIM-OpenADR Harmonization members are developing use cases to illustrate how information can flow from one protocol to the other.

After multiple scenarios are completed, a full mapping will emerge, along with some mutual improvements to both standards in the process.

Predicting how this plays out is difficult.

The electricity industry might end up with multiple protocols, perhaps with new entries not even under consideration today.

Or we might see the harmonization effort focus originally independent protocols into a common, all-encompassing schema.

Those with a stake in the outcome, namely utilities, system operators, energy companies and end user advocacy groups, should follow and whenever possible contribute to the dialogue so we arrive at the best solution—not just a good one.

Scott Coe is a vice president at UISOL, an Alstom company, and manages UISOL’s markets and demand response practice. He has a Master of Science in Engineering Physics and a doctorate in physics. Reach him at scoe@uisol.com.

Shangyou Hao is a director at UISOL, an Alstom company. He has 25 years of experience in power system engineering, economics, computer applications and systems integration services in the utility industry. Hao has a doctorate in electrical engineering. Reach him at shao@uisol.com.