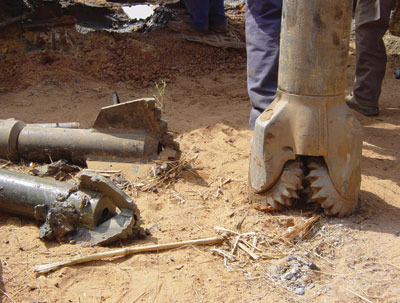 The U.S. Department of Energy has selected a Battelle Memorial Institute-led team to drill a test borehole of over 16,000 feet into a crystalline basement rock formation near Rugby, North Dakota.

This is an important step in exploring the science needed for use of deep boreholes in crystalline rock formations, the DOE said. One of the most promising applications is the potential for disposal of certain types of high-level radioactive wastes; another could be geothermal energy development.

The field test will provide insights into crosscutting subsurface science and engineering challenges such as drilling techniques, wellbore stability and sealing, and subsurface characterization.

“This is an important first step to increasing our scientific understanding of the potential uses for crystalline rock formations,” said Secretary Moniz, “including the feasibility of boreholes as an option for long term nuclear waste disposal.”

Over 40 years ago, scientists suggested the idea of disposing of nuclear weapons production waste in holes drilled miles into granite. In January 2012 the DOE‘s Blue Ribbon Commission on America’s Nuclear Future recommended research into the possibility of using deep boreholes “particularly as a disposal alternative for certain forms of waste that have essentially no potential for re-use.”

Determining the feasibility of deep borehole disposal is the goal of the DOE’s estimated $35 million, five-year project on about 20 acres of state-owned land.  This research will include examination of the hydrogeological, geochemical, and geo-mechanical characteristics of the host rock at considerable depth.  Researchers will collect extensive data during drilling and will allow for specialized scientific testing after drilling is complete. No radioactive material will be used during any of the testing for this borehole project.

Scientists have identified many regions in the United States that have large, geologically stable rock formations similar to the Rugby, North Dakota location. The work in North Dakota will help increase understanding of similar locations across the country.

Members of the winning team are: