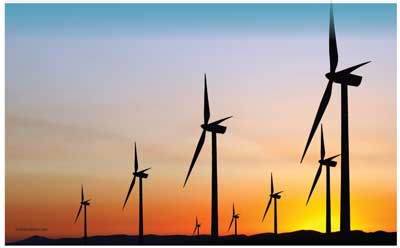 Governments, grid operators and utilities across the U.S. are working to integrate increasing amounts of renewable generation into their energy mix. One of the perceived challenges is the impact of renewables on grid stability.

GE Energy Consulting recently presented the findings of a study on the Eastern Interconnection of the U.S. at the 2014 CIGRE biennial session. The study, which GE conducted for the U.S. National Renewable Energy Laboratory (NREL) with funding from the Department of Energy, explored how the grid, with significant wind power added, could respond to a major event and maintain system frequency.

Frequency response is a measure of the power system’s ability to re-establish balance after large, sudden mismatches of generation and load. Mismatches caused by the trip of large fossil or nuclear generating stations are most concerning. These trips can result in swings to significantly lower frequencies on the system. When inadequately controlled, these swings can lead to customer interruptions and potentially even large-scale blackouts. The issue has garnered considerable attention throughout the U.S., and recently, the North American Electric Reliability Corp. (NERC) passed a new standard that establishes minimum performance requirements for frequency response.

The “Eastern Frequency Response Study” was designed to investigate the frequency response of the Eastern Interconnection under possible future system conditions with high levels of wind generation resulting from the type of large loss-of-generation events targeted by the NERC Standard BAL-003-1, Frequency Response and Frequency Bias Setting.

To establish a realistic baseline, GE worked with FirstEnergy to acquire a dynamic database representing the Eastern Interconnection under low load conditions. This Multiregional Modeling Working Group (MMWG) database had very little wind penetration. A light load power flow case was selected with the expectation that it would represent a challenging condition for the Eastern Interconnection with respect to frequency response.

The original database was intended for traditional stability analysis, where the first few seconds of system response to critical faults and equipment tripping are of primary concern. To evaluate overall system frequency response, longer simulations of up to 60 seconds are required. The fidelity of the standard MMWG database model for this use was improved by making broad changes to hundreds of thermal power plant models throughout the system. The changes were based on the understanding of factors’ affecting current observations of frequency behavior of the Eastern Interconnection.

At the snapshot of time represented, the total Eastern Interconnection load was 272 GW, with only 1 GW of generation coming from wind plants. Simulations mostly focused on the trip of multiple thermal plants in the region of Rockport, Indiana. This 4,455-MW event is patterned after the largest loss-of-generation event in the Eastern Interconnection for which, according to NERC, involuntary load-shedding and other stability consequences must be avoided. The modified base case reasonably reflects the frequency performance characteristics measured for this event.

Modern wind generation can contribute to frequency response with governor and inertial response controls. These controls are commercially available and vary somewhat among suppliers; however, their use is not widespread in North America.

Simulations in which these controls were enabled were examined to test other options to improve frequency response. Specifically, under-frequency governor controls turned on and enabled by holding some of the available wind power in reserve by curtailment when system frequency is normal. For this case, 5 percent of the available power (some 3,500 MW for this snapshot) was held back.

A case with one type of wind turbine inertial control also was evaluated. The results of these illustrative cases were dramatic. The severity of the frequency swing and the performance as measured by the NERC Frequency Response (FR) metric was substantially improved, resulting in considerably better performance than the near-zero wind baseline case. The efficacy of the wind plant controls was much greater than that of the frequency-responsive thermal plants that were displaced.

Quantitatively, this is in the sense that each megawatt of wind power held in reserve for frequency response had a much greater benefit on the key performance metrics of frequency nadir and NERC FR than a typical megawatt of primary response from the fleet of thermal plants.

As frequency response concerns continue to grow, the fidelity of planning models for frequency analysis will be critical. The evidence indicates many generators must be operating differently than the current MMWG model. Specifically, the model needs to reflect that most thermal machines in the Eastern Interconnection have their governors disabled or be should be equipped with load reference controls that defeat governor response. Investigation of individual unit performance in response to actual grid events is recommended.

As wind generation penetration increases throughout the Eastern Interconnection, unit commitment and dispatch patterns will depart substantially from historical practice. For future planning analysis, commitment and dispatch that would occur under conditions of particular concern for frequency response (i.e., periods of high wind generation, low load, high inter-area exchanges or poor forecasts) will need to be considered carefully.

Wind plants, when equipped with grid-friendly frequency responsive controls, are highly effective in helping maintain frequency when needed. GE’s study focused on the potential impact of wind power on the Eastern Interconnection of the U.S., but the results are generally applicable.