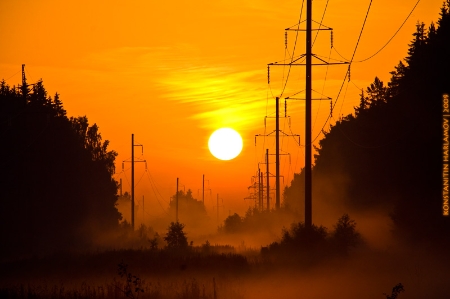 Although peak oil is a prophecy that has yet to come true, the fate apparently has fallen on U.S. residential electricity sales, which are declining after a nearly century-long rise, according to a new report from the Energy Information Administration.

Overall, household electricity use has receded about 9 percent since its heyday, according to the EIA. 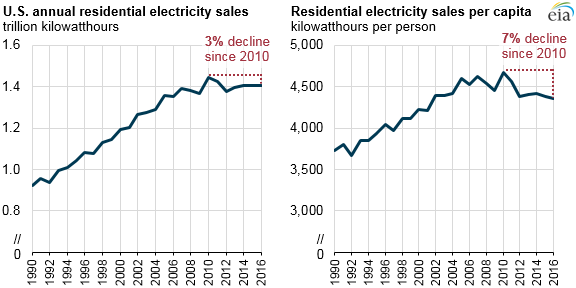 Only nine states have exceeded their 2010 levels of per-capita sales since then. Last  year, the highest per-capita sales was 6,619 kWh in Alabama, while the lowest was 1,828 kWh in Hawaii.

Rapid growth in the adoption of small-scale solar photovoltaic (PV) systems in states such as Hawaii and California has contributed to the recent decline in some states’ retail electricity sales.

In 2016, residential distributed solar PV generation accounted for about 15 percent of electricity consumption in Hawaii’s residential  sector. California’s solar consumption was 6 percent and 3 percent in Arizona, according to the EIA.

Energy efficiency (EE) investment also played a significant role in limiting residential electricity use in several states. Nationwide, EE spending on incentives per person was $3.92 from 2013-2015, with Massachusetts leading the way at $18 per capita and the Alaska lowest at 4 cents.

The U.S. consumer seems to embracing the concept of EE within their home, according to statistics cited by the EIA report. In 2015 86 percent of U.S. households surveyed reported using at least one compact fluorescent light or LED bulb, compared to 58 percent in 2009.

Some 18 percent of responsive households reported they had no incandescent bulbs in their homes at all.

The oil bust has dramatically impacted North Dakota’s residential electricity sales in the past year, shaving about 1,100 kHW per capita in two years, according to the EIA. At a time when the state’s per-capita real gross domestic product fell 12 percent, the electricity sales also dropped from a peak of 7,241 kWh in 2014 to 6,149 kWh last year.