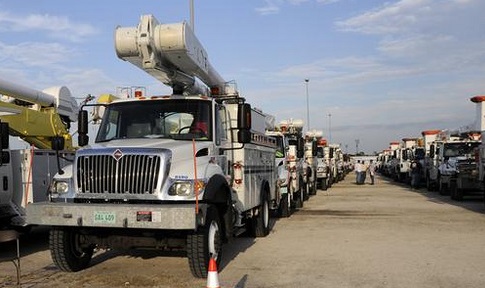 U.S. electric power utilities and service companies are stepping up to help Houston with money and manpower as it reels from the impact of Hurricane Harvey.

Exelon Corp., Pacific Gas & Electric, NextEra Energy, Avangrid and Schweitzer Engineering Laboratories were among the grid-connected firms which are donating toward Harvey relief efforts. The storm has caused more than 300,000 power outages throughout south Texas and dumped about 50 inches of rain on flood-ravaged Houston.

“We send our thoughts and prayers to the victims of this disaster, and we hope our contribution helps in some way toward rebuilding lives,” Geisha Williams, CEO of PG&E, said in a statement announcing that the utility would contribute toward the American Red Cross. San Francisco-based PG&E will match employee donations up to $50,000, providing up to $100,000 in aid.

The Red Cross has set up more than 200 shelters across south Texas, according to reports. Tens of thousands of residents have been displaced by Harvey, while rescue efforts are ongoing in Houston.

Pullman, Washington-based Schweitzer Engineering Laboratories (SEL) has donated $150,000 to the American Red Cross for Harvey relief efforts. The company is also offering its customers a price reduction and expedited shipping for products going into the storm region.

Chicago-based Exelon and its Constellation Energy unit are joining to donate another $150,000 to the American Red Cross. Constellation owns naming rights for the Constellation Field minor league baseball park in Houston suburb Sugarland, which was temporarily opened as a shelter for those displaced early by the flooding.

Constellation, which is in the competitive retail and wholesale electricity business, has about 400 employees  in its Houston offices. All of them are accounted for, the company reported.

“Giving back to the communities we serve is one of our company’s most important responsibilities, and even more so during times like this,” said Joseph Nigro, CEO of Constellation, in a statement. “The safety and security of our employees and their families is our highest priority. We’ll continue to come together to lend support to our colleagues and neighbors in the Houston area in the months ahead.”

Florida-based NextEra Energy also announced it will donate $100,000 to the Red Cross and match employees up to another $100,000. NextEra’s utility unit, Florida Power & Light, also reported sending manpower help to the region.

Avangrid will donate $50,000 to the Red Cross through its philanthropic wing, the Avangrid Foundation.  The Connecticut-based utility holding company employs more than 100 people in Houston and Corpus Christi as part of its gas storage and wind energy businesses.

Closer to home, Dallas-based transmission firm Oncor Electric Delivery is donating $100,000 to the American Red Cross for relief efforts. The utility also sent about 160 workers and contractors to help AEP and others repair the south Texas grid.

Money is not the only thing that electric utilities nationwide are sending. Oklahoma Gas & Electric sent about 80 crew members down south earlier this week to help with outage restoration efforts. Kentucky Utilities, Westar Energy, AEP are among many other electric grid companies outside Texas which have sent workers to help in the dire time of need.

On Friday, Xcel Energy announced a donation of $100,000 to the American Red Cross to assist with Hurricane Harvey relief and recovery efforts. The company is making the contribution through the Xcel Energy Foundation, a non-profit organization.