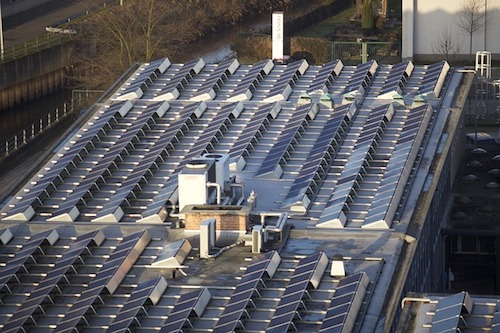 By Gavin McCormick and Peter Bronski

California recently joined other leading states, provinces, cities, and corporations around the world by setting an ambitious 100 percent carbon-free electricity target. It’s a landmark, not because California was the first, but because it is the biggest. The state ranks as the fifth-largest economy in the world.

SGIP has spurred record-breaking levels of energy storage, all intended to lower California’s overall greenhouse gas (GHG) emissions. But is it working? It turns out: not so well.

Last month, the California Public Utilities Commission (CPUC) released an answer in the form of its 2017 SGIP Advanced Energy Storage Impact Evaluation, and the results were sobering.

The 2017 edition of the report, like the 2016 edition, found that energy storage systems in California are actually increasing emissions across residential and non-residential projects alike. This is not just a California problem. It adds to the growing consensus that, as of today, the operation of energy storage increases emissions.

For Energy Storage Emissions, The Devil Is in the Charge / Discharge Details

The 2017 SGIP impact evaluation evaluated GHG impacts using marginal emissions for each hour of the year. That’s because each time batteries charge, they’re increasing the total amount of demand on the grid; each time they discharge, they’re decreasing overall grid demand.

These storage-induced increases and decreases in demand have an important influence on the marginal power plant that is being called upon to meet that last kWh of demand. Whether that marginal generator is a wind farm or solar farm or a fossil-burning power plant in turn has important emissions implications.

Plus, energy storage has roundtrip efficiency losses to contend with. It takes a little more electricity going “in” to equal each kWh of electricity coming “out.”

Yet energy storage hasn’t had a way to make these evaluations and decisions. The CPUC, its staff, and working group participants have been working hard to change that.

Cleaning Up California’s Energy Storage with A GHG Signal

To be clear, neither CPUC nor energy storage should in any way be singled out for having been emissions-increasing. This is a nationwide challenge; the California’s 2017 impact study was conducted with the benefit of a year’s-worth of hindsight data. In real time, energy storage operators and regulators had no way to make more informed decisions.

Since lack of data was the problem, the CPUC convened the GHG Signal Working Group to answer an important two-part question: a) Could a well-designed GHG signal help energy storage reduce emissions? b) What would be the subsequent effect on customers, including electricity bill impacts?

The working group analyzed thousands of scenarios, testing different customer classes, project types, climate zones, rate structures (including new time-of-use rates under consideration for the state and its utilities), and strategies for how energy storage companies might adjust their charge / discharge timing.

The working group relied on real customer data, real emissions data, and real dispatch algorithms to assess energy system performance. In many ways, the working group set a gold standard for emissions evaluation that policymakers and peer-reviewed journals alike can learn from.

The results were exciting. Some of the key results included:

In other words, adding a GHG signal alongside updated time-of-use rates has the potential to keep storage customers’ utility bills the same or cheaper while transforming energy storage from a polluting technology, to one that decreases net emissions.

Based on these results, on September 6, the CPUC staff issued a Proposal that offers a potential scenario for how energy storage in the Golden State might swing the pendulum and go from emissions liability to climate benefit.

The biggest changes are potentially in store for C&I customers and their energy storage projects.

Gone would be the old minimum requirements for battery round-trip efficiency (RTE), which had previously been used as a proxy for a battery’s environmental friendliness. Recent research, including CPUC’s own 2017 impact evaluation, found the effectiveness of RTE as a net measure of emissions to be a false assumption. Now in the place of RTE is a call for a public real-time GHG signal, based on marginal emissions data and built upon a transparent and vetted methodology.

In other words, the rule would update SGIP to reduce ineffective requirements while prioritizing the states emissions objectives by giving operators flexibility in how they dispatch storage systems to achieve those goals.

If issued, the ruling would be an example of a California regulator inventing a novel means to replace a command-and-control, one-size-fits-all approach to emissions by arming industry with accurate, up-to-date data and then, in some sense, getting out of their way. If this story sounds familiar, it’s because we’ve seen this before.

When the South Coast Air Quality Management District first proposed to give power plants good data and incentives and then get out of their way, they called it emissions trading. That time, the regulation not only slashed emissions. It also scaled to become an essential pollution control solution across the globe. And it unleashed a storm of innovation that lowered abatement costs far below what was then believed to be possible, such as when SO2 fell from $2,000 per ton to less than $3 per ton today.

Today, the power of Californian innovation may surprise us again. One of the most interesting findings from the working group report was that even from the very first model runs, there were some opportunities for co-optimization strategies to reduce emissions at no cost at all. Storage systems were able to leverage quirks like the fact that emissions vary more frequently than prices to develop surprising win-win strategies such as ignoring emissions during discharging, yet deliberately charging during times of surplus renewables.

In July, respected Vox writer David Roberts titled a feature piece on this topic “Batteries have a dirty secret.” But with the changes likely coming from the CPUC, he may need to return to the topic to write a very different story — one about how an open working group combining Californian regulators, NGOs, and energy storage operators innovating together in concert was able to find a way to deliver on the original promise of California’s SGIP program: for advanced energy storage systems to reduce GHG emissions from the state’s electricity grid.

About the authors: Peter Bronski consults on cleantech marketing and communications for organizations such as Energy Web Foundation, WattTime and Coronal Energy. He is the founder and CEO of Inflection Point Agency and the former editorial director at Rocky Mountain Institute.

As an academic and social entrepreneur, Gavin McCormick applies behavioral economics to energy markets to develop ultra-low-cost techniques to deliver more renewable power and energy efficiency at scale. He is the Executive Director and Co-Founder of WattTime.