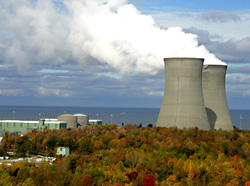 The FirstEnergy Perry nuclear plant in Ohio was returned to service Oct. 26 after an unplanned outage that occurred Oct. 20.

The plant experienced an unexpected shut down at 2:18 a.m. on Monday, Oct. 20, a FirstEnergy spokesperson said Oct. 28 when contacted by GenerationHub.

The feedwater system is the one that normally supplies power to the reactor core; back-up systems including the high pressure core spray system and reactor core isolation cooling automatically turned on to provide water to the core. There was no challenge to the reactor’s fuel, which was always well covered by water.

Upon inspection of the equipment, Perry personnel identified an issue with an electrical circuit card inside an inverter on the feedwater control system’s normal power supply.

The inverter converts direct current produced in the power supply into alternating current. The feedwater control system has been placed on an alternate power supply to allow the plant to return to service, and the inverter will be replaced in an upcoming refueling outage, according to the FirstEnergy spokesperson.

Perry is a roughly 1,200-MW boiling water reactor (BWR) that was commissioned during the 1980s. The plant is run by the company’s FirstEnergy Nuclear Operating Co. (FENOC).