Electric utilities are among the largest industrial users of drones. Some retailers–Amazon and Domino’s Pizza are the highest profile–are experimenting with drone delivery of products. Amazon even set up a whole new business unit, Amazon PrimeAir, to commercialize the many opportunities the company sees in the incorporation of drones into its corporate infrastructure. Police, fire and rescue agencies, as well as the military, have used drones for many years now, and the hobbyist market for drones continues to grow.

Not to be overlooked, however, is the use of drones by electric utilities as 21st Century work horses in the field to inspect power lines in rural areas and rugged terrains. It is not unusual today for an electric utility to have a fleet of 100 or more camera-equipped drones. Other common industrial applications for drones include inspection of pipelines by oil companies and monitoring of cattle herds by ranchers. Drones are also being used increasingly for both public and private security and surveillance.

Considering the wide use of drones by our readers, we decided it was time for Follow the Patents take a look into our patent-filled crystal ball to see what new technologies are on the horizon for the drone (or, more properly “Unmanned Aerial Vehicle” or “UAV”) business sector. In this installment of Follow the Patents, we look at five recently granted drone-related patents to receive an eagle’s eye view of what new drone technologies will be available in the next few years. One of the patents we look at directly involves the use of overhead power lines!

U.S. Patent No. 9,334,052 for “Unmanned Aerial Vehicle Flight Path Determination, Optimization, and Management“ comes to us from Verizon. The telecom giant is clearly thinking down the road toward a time when there will be long flights made by drones that will need to be planned, just as airplane flights are planned based on various factors and a flight plan is filed for each and every flight. This patent covers a technology for computing an efficient flight path for a UAV from a specific location to a specific location based on weather conditions, air traffic already in the air or schedule to be in the air, obstacles along the flight path (electric transmission towers come to mind), restricted airspace and other factors. If there is a fleet of UAVs, the technology selects the specific UAV that is capable of traversing the most efficient flight path based on the available raw data, and it generates flight path instructions for the most efficient flight path.

Filed in 2014 and granted in 2016, this patent gives Verizon a leg-up on capturing what it clearly sees as an emerging opportunity – generating flight plans for drone operators. We can only imagine that Verizon sees itself creating software based on this patent, and providing that software to operators of fleets of drones – electric utilities, perhaps – and becoming the de facto standard in this business segment, and using its patent to keep competitors out! As more and more drones fill the sky, the time may come when utilities have to file flight plans when they send drones out on power line inspection trips.

U.S. Patent No. 8,543,265 for “Systems and Methods for Unmanned Aerial Vehicle Navigation” was granted to Honeywell in 2013. While it pre-dates Verizon’s patent for creating a flight path and flight plan for a UAV, it addresses the issue of what happens when there is an obstacle in a pre-determined flight path. The technology in the patent addresses the instance that a drone visually detects an obstacle in its flight path and enables the drone to calculate a second flight plan to avoid the obstacle. Additionally, if the drone acoustically detects an unknown aircraft – during either the original or the modified flight plan – it calculates yet a third flight plan to avoid the unknown aircraft. Throughout its flight, this patented technology is capable of calculating a new flight plan based on other input such as information from a ground control station.

This patent reminds us of the adage that a business plan is something you live by, not something you die by. The engineers at Honeywell foresaw the time when numerous unexpected obstacles would require the re-calculation of a drone’s flight plan. Honeywell also applied for European and Japanese patent protection for this technology.

U.S. Patent No. 9,421,869 for a “Deployment and Adjustment of Airborne Unmanned Aerial Vehicles” is assigned to Amazon who, like Verizon, is thinking down the road about longer and longer drone flights. One of the limitations Lindbergh faced in crossing the Atlantic was being able to carry enough fuel. Today, military jets can be refueled in the air so they can stay airborne almost indefinitely. Amazon has addressed this same issue as it relates to drones. This patent covers a technology in which there are spots along the electric power grid at which a drone can hover and recharge its batteries without having to land. The technology includes communications that enable a UAV to fly to a conductor location at an overhead power line. These conductor locations will include a “secondary coil” that steps the voltage down to a level that can be used to re-charge the drone’s battery while it hovers nearby. Included in the patent is a shielding substrate that protects the electronics of UAV from the EMF from the power lines.

Also granted in 2016, this patent shows that Amazon sees a need for faster re-charging of drones to enable them to make longer flights, and the company plans to incorporate the current power grid into its plans. What we do not know is if Amazon has been in touch with any electric utilities about setting up the “secondary coils” described in its patent at key points along the power distribution infrastructure. Not addressed in the patent – and an issue that will need to be resolved – is how the power drawn by the drones for aerial re-charging will be metered and paid for. 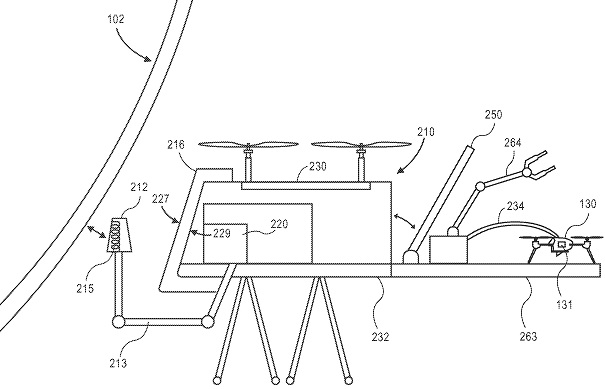 This drawing from U.S. Patent 9,421,869 shows a drone hovering near a secondary coil on an overhead power line to re-charge its batteries while still in flight.

U.S. Patent No. 9,346,560 for “Systems and Methods for UAV Battery Exchange” is assigned to a leading Chinese drone manufacturer, SZ DJI Technology, that sells drones globally under the DJI brand. DJI’s thinking is along the same lines as Amazon’s. As drone flights become longer and longer, how will drones “re-fuel?” Stopping along the trip and plugging the unit it to let the batteries re-charge is clearly not an attractive option. This patent creates an “Energy Provision Station” at which a drone can autonomously land, swap out its battery or batteries, and take off. The drone equivalent of a pit stop. The Energy Provision Station rep-charges the swapped-out batteries so they are fully charged when the next drone shows up.

DJI filed its original patent application in 2014 and this patent was granted in 2016. DJI also filed for patents in Europe, Japan and China, and has filed continuation applications from the original application. DJI is not just thinking global, but is also thinking about the service and support infrastructure that will need to be built to support the billions of drones that will be sold worldwide in the coming years. We can only wonder if Henry Ford ever thought about all the gas stations, repair shops, tire dealers, body shops, car washes, parking garages, motels, road maps and atlas publishers, and other industries that would crop up to serve owners of the millions of automobiles he manufactured and sold? 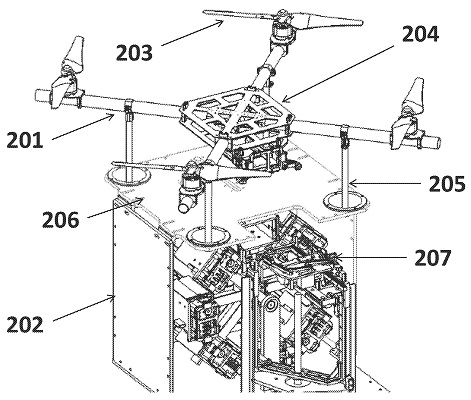 This schematic from U.S. Patent No. 9,346,560 provides a visual conceptualization of the Energy Provision Station described by the patent.

U.S. Patent No. 9,087,451 for an “Unmanned Aerial Vehicle Communication, Monitoring, and Traffic Management” addresses the need for efficient ground-to-drone communications. This patent is from an independent inventor, John Jarel, who must be a lifelong Batman fan. His invention uses a “lighting assembly” to communicate with overhead drones by shining an image up into the sky for drones to read and interpret. The minimum and maximum altitudes at which the drone should fly to avoid collisions with other aircraft or ground objects, if it is entering or near restricted air space, if the drone has clearance to enter the right of way, and the location of a nearby landing zone are just some of the data transmitted to the drone via a light beam.

Applied for in 2014 and granted in 2016, Mr. Jarel’s patent would require the creation of the lighting assembly described in his patent, as well as an “identifier” unit mounted on the drone to receive and interpret the image light from the ground, and it will be the electric utilities that will need to power and, very possibly, also host these lighting assemblies. Mr. Jarel is clearly thinking global for his invention since he has pending applications for European and Chinese patents. 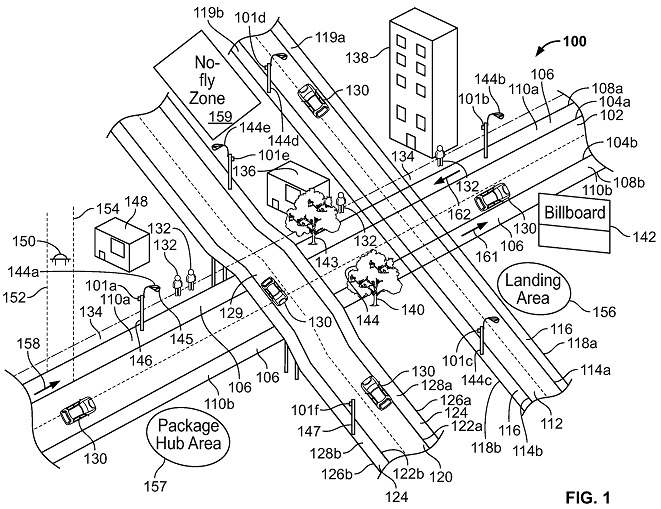 This figure from U.S. Patent No. 9,087,451 illustrates where lighting assemblies might be located to alert UAVs of the location of a landing zone.

Next time: The Smart Home is here, and you only need to take a walk through the Smart Home sections at Lowe’s and Home Depot to see that we’ve come a long way since June Cleaver made scrambled eggs for the Beaver. The next Follow the Patents will look at emerging technologies in the Smart Home of tomorrow.

Alec Schibanoff is Vice President of IPOfferings LLC, a patent broker and IP consulting services firm. He can be reached at alec@IPOfferings.com.