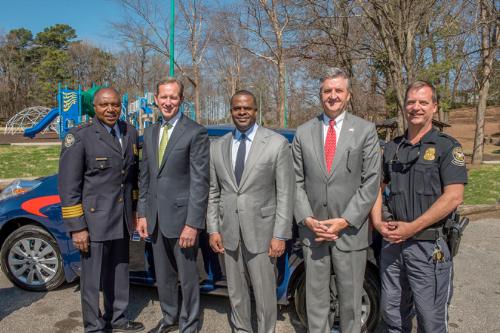 On Thursday, March 20, Georgia Power donated an all-electric 2013 Nissan Leaf to the Atlanta Police Foundation at a special event held at Washington Park in southwest Atlanta. The car, fully-equipped with police graphics, emergency lights, speakers and sirens, will be used by the Atlanta Police Department (APD) Path Force Unit to provide public safety for the Atlanta BeltLine, its surrounding parks and neighborhoods. Paul Bowers, chairman, president and CEO of Georgia Power, presented the keys to Dave Wilkinson, president and CEO of the Foundation, and Police Chief George N. Turner at the event. Atlanta Mayor Kasim Reed also attended the ceremony and provided an update on the city’s sustainability initiatives and the Atlanta BeltLine project.

The Nissan Leaf is a plug-in electric vehicle (PEV) that operates with zero tailpipe emissions. The vehicle will be part of the APD’s C.O.P.S Path Force Unit, specifically assigned to the Atlanta BeltLine. The Atlanta BeltLine is one of the largest urban redevelopment and mobility projects currently underway in the United States and, once completed, will provide a network of public parks, multi-use trails and transit options that will ultimately connect 45 neighborhoods circling downtown Atlanta.

“This donation is part of our continued commitment to the Atlanta community, including supporting law enforcement and contributing to the city’s sustainability,” said Bowers. “The presence of electric vehicles on Georgia roadways is growing daily and we hope that an all-electric patrol car will build awareness of electric transportation technology and demonstrate the capability of PEVs in public safety.”

Atlanta ranked as one of the top five markets for electric and plug-in hybrid vehicles nationwide. Georgia Power provides customers with various information to help them make informed decisions about leasing or purchasing electric vehicles, including special rate options such as the PEV rate and an interactive savings calculator.