When President Barack Obama enacted both the Hydropower Regulatory Efficiency Act (HREA) and Bureau of Reclamation Small Conduit Hydropower Development and Rural Jobs Act in August 2013, their passage was seen as a coup for the hydroelectric power industry and a harbinger of development within the U.S.

The legislation-billed by the National Hydropower Association (NHA) as the first significant pieces of energy legislation to have been enacted since the American Recovery and Reinvestment Act in 2009-include conditions designed to streamline the regulatory process for certain types of hydroelectric projects.

Both bills received bipartisan support and important components in Obama’s “all-of-the-above” plan that seeks to develop “every available source of American energy.”

“Today, no area holds more promise than our investments in American energy,” Obama said during his 2013 State of the Union. “After years of talking about it, we’re finally poised to control our own energy future.”

An Eye on Potential

Both acts seek to encourage private development in the U.S. hydro sector, which, according to estimates released by the Department of Energy (DOE) and Oak Ridge National Laboratory in April 2014, could provide up to 65 GW of new capacity across more than 3 million U.S. rivers and streams.

Hydro makes up 7 percent of all domestic power generation and is the largest source of U.S. renewable energy, according to NHA data, although only 3 percent of the 80,000 dams and other potential generating sites in the country are developed to produce electricity.

“Hydropower can double its contributions by the year 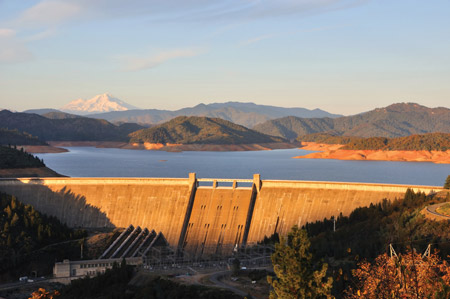 2030,” said Energy Secretary Ernest Moniz during the NHA annual conference in Washington, D.C. “We have to pick the covers off of this hidden renewable that’s right in front of our eyes and continues to have significant potential.”

Although both pieces of legislation were designed to promote the development of small hydropower by cutting red tape, each addresses separate areas of the federal regulatory process.

“- Increased the conduit exemption to 40 MW for all projects;

“- Provided FERC the ability to extend preliminary permits; and

The act also applies the bureau’s “categorical exclusion” from the National Environmental Policy Act of 1969 (NEPA) to eliminate redundancies in the approval process while including language pursuant specifically to projects that would have been subject to review under the Water Conservation and Utilization Act of 1939.

The version of the bill enacted by Obama also expands the act’s scope to include any bureau-owned projects that might have been excluded from a previous version of the legislation that died in Congress the prior year.

Although the full effectiveness of HREA remains to be seen until FERC finalizes its two-year licensing process in 2017, the Reclamation act already is showing significant signs of spurring U.S. small hydropower growth as intended.

As of Dec. 1, 2014, notices of intent to construct have been filed with FERC for 49 conduit projects. The projects-primarily in California and the Pacific Northwest-would have a cumulative output capacity of more than 23.6 MW.

The 26 FERC-approved projects have a cumulative capacity of 10.55 MW. Another 16 pending approval could add 8.73 MW of capacity. The remaining applications were rejected.

Table 1 provides details on approved notices of intent to construct, on 26 projects, as of Dec. 1, 2014.

“Staff expects to see a significant number of these filings in the future based on industry inquiries and comments,” according to FERC.

The average processing time from filing of the notice of intent to the final determination already has dropped to about 60 days.

FERC recently has been active in meeting stipulations required by HREA, finalizing its rules on preliminary permits and exemptions to conform to the bill in September 2014.

The agency, however, is still investigating the two-year licensing process for nonpowered dams and closed-loop pumped storage and sought pilot projects to test the new process in January 2014.

FERC selected a 4.9-MW proposal by Free Flow Power (FFP) Project 92 LLC in August 2014 for a project to be developed at the Kentucky River Authority’s existing Lock and Dam No. 11 on the Kentucky River in Estill and Madison counties.

FFP has until January 30 to complete studies and apply for water quality and coastal zone certifications and until May 5 to file its license application. FERC then will issue its combined acceptance and ready for environmental analysis notice by July 4, per a letter sent by FERC to FFP in August 2014.

Preliminary minimum criteria established by FERC for the two-year process include stipulations that a project must:

“- Cause little or no change to existing surface and groundwater flows and uses;

“- Include a letter from the dam owner saying the plan is feasible, if the proposal is to be located at or to use a federal dam;

“- Include a letter from the managing entity giving its approval to use the site if the proposal is to use any public park, recreation area or wildlife refuge; and

“- Not be continuously connected to a naturally flowing water feature if a closed-loop pumped-storage project.

The commission previously said it intends to hold a final workshop on the effectiveness of the HREA pilot project by February 2017, with a report on its findings to be submitted for congressional review by April of that year. 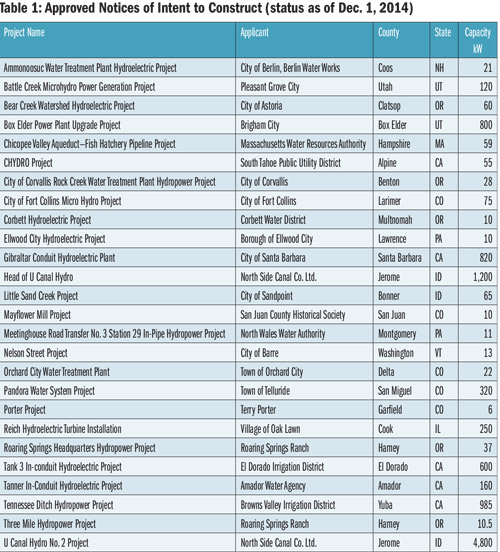 “Congress recognized that it could encourage hydropower development by reducing costs and regulatory burden during the project study and licensing stages,” FERC’s preliminary rulemaking said. “To that end, the Hydropower Regulatory Efficiency Act amends statutory provisions pertaining to preliminary permits and projects that are exempt from licensing.”

The potential for hydroelectric growth is reflected in the enactment of 2013’s legislation and an initiative launched by the DOE in 2014 called Hydropower Vision.

The plan is intended to increase hydropower’s visibility by quantifying and monetizing the advantages that make it an attractive consideration for policymakers, developers and consumers.

The plan is still being developed with the input of industry members from across the hydropower sector, but the hope is that it will spark hydroelectricity much like a similar DOE initiative did for U.S. wind energy producers beginning in the mid-2000s.

“The key section of this report is taking that picture, taking that understanding, taking all that information and then distilling it to the activities that all of us must do.”

Zayas said the desire is to involve as many industry members and advocates as possible, making the plan representative of the hydro sector at-large.

The DOE previously said that it plans to provide an update on the Hydropower Vision plan during the NHA’s Annual Conference in April, with a draft report to be issued in the third quarter of this year.

Meanwhile, NHA and other industry leaders also are working to ensure that hydroelectric power is included in the Environmental Protection Agency’s proposed Clean Power Plan.

The plan, announced in June 2014, is a performance standard for reducing carbon dioxide emissions from existing power plants under the Clean Air Act, Section 111(d) and would require each state to reduce its emissions to meet state-specific standards starting in 2020 with a final rate for 2030 and beyond.

HydroVision International, the largest gathering of hydro professionals worldwide, is July 14-17, 2015, at the Oregon Convention Center in Portland.

The event highlights perspectives on the role of hydropower, explores issues affecting hydro resources and helps participants develop a vision to meet challenges and ensure the future sustainability of hydro.

“- The largest exhibition of products and services in the industry;

Visit www.hydroevent.com for details and registration.

A letter submitted by the NHA to the EPA in November 2014 says, however, that 111(d) “does not fully value hydropower’s contributions in reducing past and future levels of carbon emissions from electric systems,” with both existing and future hydropower being “significantly” undervalued.

The NHA’s comments also say the EPA proposal “does not accurately characterize hydropower’s future growth potential” and seeks to ensure hydropower is included as a carbon-reducing consideration as states begin shaping their policies.

The proposal relies on an assumption that hydropower generation will remain flat through 2030, according to the NHA, although the organization notes more than 930 MW of new capacity were commissioned in the U.S. between 2009 and 2013.

According to the NHA, more than 310 projects representing more than 43,000 MW of new conventional, pumped-storage, conduit, and marine and hydrokinetic energy are under FERC consideration for approval.

What it all Means

With a clear interest in developing America’s hydroelectric resources at the national level, developers must begin taking advantage of policies and programs being offered.

Speaking in July 2013, NHA Executive Director Linda Church Ciocci said, “Far from being tapped out, hydropower has the potential to play an even larger role in our diverse electricity portfolio as we strive for a cleaner energy future and a stronger economy.”

The sentiment is one that has been echoed by many on Capitol Hill, as reflected by the strong bipartisan support the Hydropower Regulatory Efficiency and Bureau of Reclamation Small Conduit Hydropower Development and Rural Jobs acts received.

“So often, because we can’t get collaboration in the energy space, instead of a win-win, we get a lose-lose,” said Sen. Ron Wyden, D-Ore.

“It seems to me that what hydro has done in the last few years is becoming the gold standard in terms of collaboration and showing how you can bring people together.”

Collaboration throughout the industry remains important as the sector continues pushing state and federal agencies to further emphasize hydropower’s role in the U.S. energy mix, particularly as they begin establishing carbon reduction goals for the decades to come.

Industry members also are encouraged to continue their participation in helping the DOE shape the Hydropower Vision plan, given that it is intended to provide a long-term outlook and guide for the entire sector.

“This is an exciting time,” Zayas said. “But we believe the time is now, and we need all of your help.”

Michael Harris is associate editor of Hydro Review. Reach him at michaelh@pennwell.com.