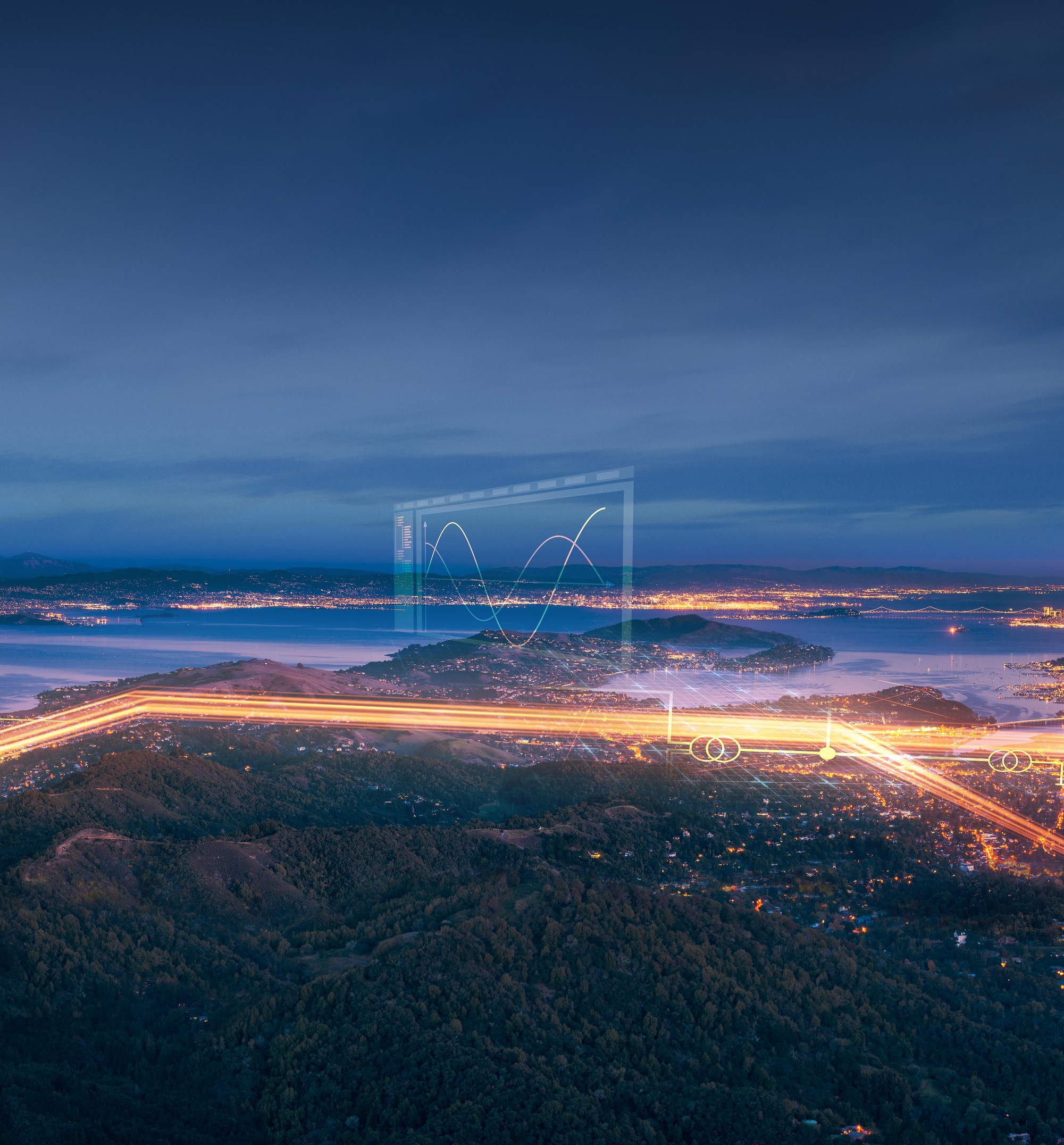 Power transmission and distribution utilities are seemingly beset by challenges. The transition towards a low-carbon economy and the widespread introduction of renewables has bought us cleaner energy, but has presented problems too.

From domestic rooftop solar PV, to commercial solar plant and right up to major offshore wind installations, the sources of generation have become far more widely distributed around the transmission network. Furthermore, the vast majority of his renewable capacity not only is variable in output, but a major chunk of grid-connected capacity also is opaque for operators. They have no control and no real visibility over domestic installations.

At the same time as variable renewable capacity ramps up, conventional baseload generation plants like coal and nuclear power capacity are being decommissioned. Whereas thermal plant typically provided a measure of stability to the grid, today it suffers from a widespread and worrying lack of inertia. The classical approach to addressing these problems has been to adopt a strategy of grid reinforcement. But for transmission asset developers, major additional infrastructure projects are becoming increasingly costly. With urban landscapes increasingly congested, acquiring land, access and clearways for new power lines or substation infrastructure projects—typically in the face of staunch local opposition—makes such projects all but economically nonviable in many cases.

Furthermore, not only is the grid itself being asked to perform in a more dynamic way in terms of power flows, but also clean generation sources are now being developed and commissioned far more quickly in comparison with the earlier kinds of power system infrastructure. Renewables projects can be installed and subsequently decommissioned within a few years. Ultimately, whatever type of transmission asset is required for grid reinforcement none can be built in a short time frame within the current framework. Justifying the cost of making such a large-scale investment is becoming that much harder for asset managers.

For those engaged in grid development planning, this scenario represents an almost perfect storm. Whereas even 10 or 15 years ago, transmission grid operators and power producers could plan for decades where new generation and transmission assets would be developed, that landscape has all but been swept away by the progress of renewables.

Recognizing this, some regulatory authorities have been providing incentives for utilities and transmission system companies, together with their supply partners, to develop alternative approaches to major infrastructure.

The drive for alternatives to infrastructure

Given that increasing the capacity of the electrical grid is not possible most of the time because of a lack of public acceptance or economic challenges, so-called non-wires alternatives are a growing phenomenon. After all, non-wires solutions do have the potential to reduce electricity bills for consumers and improve reliability while deferring significant expenditure on capital infrastructure. While most of these developments have focused on the distribution networks to date, there is growing interest on the transmission sector too.

For example, Bonneville Power Administration (BPA) has launched a project aimed at deferring a transmission line development. The I-5 Corridor Reinforcement Project—an 80-mile and 500-kV transmission line—will not go forward. The BPA said “as a result of” the inherent difficulties associated with building this line, we are taking a new approach to managing congestion on our transmission grid.” Instead of the traditional approach of primarily relying on new construction, the BPA will be  “embracing a more flexible, scalable, and economically and operationally efficient approach.” BPA adds that this approach will require an increased reliance on advanced technology.

Navigant Research finds that the global spend on non-wires alternatives is expected to grow from $63 million in 2017 to $580 million in 2026. Navigant notes that while most non-wires adoption has taken place in North America so far, it is expected to become a bigger piece of the global transmission and distribution investment picture. Advancements in technology and utility willingness to engage with mechanisms that can avoid infrastructure replacement are key drivers, Navigant reported.

While the outlook is encouraging, and despite the attractiveness of non-wires alternatives, most transmission and distribution system operators are structured as regulated return businesses—where these investments are more difficult to justify. New power lines or substation infrastructure can be assigned a clear value and a capital cost that can be recovered from consumers. It can be much harder to recognize the value of avoiding such investments. As a result, almost all such developments to date have been mandated or otherwise incentivized.

In the New York region, for example, the New York State Energy Research and Development Authority (NYSERDA) is funding the Reforming the Energy Vision (REV) initiative. Aimed at investor-owned utilities like Consolidated Edison, National Grid and NYSEG, the program has fostered numerous non-wires developments. Within the REV scheme ConEdison has engaged in a plan designed to avoid a $1 billion investment in a new substation with a mixture of demand-side response, storage capacity and other measures.

However, there is no single solution to the grid integrity challenge. It depends on the specific threat, its location, and the regulatory and business framework. Today, utilities, regulators and their original equipment manufacturer partners are still searching for the best tools and frameworks to support the evolving grid and make it efficient and cost-effective both now and for the future.

The impact of fluctuating voltages from renewables is increasing the demand for reactive power right up to the highest voltage levels of the network. There is the potential for voltage excursions both during steady state operations such as during the day in solar heavy areas, but also during transient operations if bigger loads or generation is tripping in or out, for example during changing cloud cover. By improving reactive power compensation capabilities, investment in the high-cost grids which tie up asset resources can be avoided.

However, the interconnected yet distributed architecture of the modern grid compounds such issues. For example, installing a transformer at a certain location may solve one problem, but inadvertently create another at a separate location.

The growing need for more flexible grid voltage stability services coincided with exciting developments in solid-state power electronics.  With the emergence of Flexible AC Transmission Systems (FACTS) there has been a steady move towards power electronics-based power architecture solutions to control power flows and improve transient stability on power grids.

The static synchronous compensator (STATCOM) is one such development and is emerging as the state-of-the-art dynamic shunt compensator for reactive power control in transmission and distribution systems.  Siemens’ advanced STATCOM technology, SVC PLUS®, is based on Modular Multilevel Converter (MMC) architecture. It uses Voltage-Sourced Converters (VSCs) to provide a near perfect sinusoidal waveform and generate significant capacitive or inductive output current independent of the AC system voltage – modulating the required voltage with a leading or lagging wave form. It is designed to rapidly inject significant inductive or capacitive power to provide improved dynamic stability of transmission systems and reduce the risk of voltage collapse.

An MMC design allows for low switching frequencies, which reduces system losses and provides a high degree of flexibility in converter design and station layout. And, thanks to their harmonic performance, there is no need for harmonic filtering. Indeed, MMC technology allows highly efficient flicker reduction and even active reduction of lower harmonics caused by nonlinear loads. Siemens SVC PLUS® uses relatively few robust and proven components, such as typical AC power transformers, reactors, capacitors and industrial Insulated Gate Bipolar Transistors (IGBTs).

Because of its topology, it can control the current almost independently of the given grid conditions so if the short circuit power level and harmonics within the grid are changing over time that is not a problem with STATCOM architecture. This is one of the key benefits of STATCOM when it comes to non-wires developments. The flexibility of the system means it is adaptable to changing grid conditions, providing longevity and avoiding the need for repeated interventions and investments to maintain stability.

Secure in the long-term benefit of the installation, investment cycles are typically shorter and, by securing the grid more quickly, potential penalties and other grid reinforcement measures may be avoided. In addition, the inherent properties of the architecture of STATCOM allow it to avoid potential ripple effects elsewhere on the grid, again avoiding the need for potential physical reinforcement.

The “Ëœplug and play’ mobile platform also offers benefits in terms of grid resiliency. Where major events have disrupted infrastructure, mobile STATCOM offers a rapidly deployed solution for voltage support and could avoid the need for significant development and cost on new power lines and substations. This is a growing issue in the USA for example, where in February Secretary of Energy Rick Perry established a new Office of Cybersecurity, Energy Security, and Emergency Response (CESER) at the Department of Energy with $96 million in funding.

Stacking the Deck for a flexible T&D system

For transmission and distribution system operators, the world is turbulent and it is changing at an ever accelerating pace. Technological advances coupled with developments in market and regulatory structures are needed to address the grid stability challenge with flexible and reliable solutions.

Multiple grid management advantages and relatively low cost are key factors driving power electronics and FACTS technology, particularly over the last decade or so. It is a trend that continues to grow. With its flexibility and consequent asset longevity STATCOM provides a full mega VAR range in the least disturbing way to the grid and generates significantly lower harmonics. Their fast response to fluctuating requirements provides an opportunity to increase reliability with better power quality and voltage stability. Certainly, regulators are becoming more stringent on those kind of excursions as their frequency increases, but also becoming more open to alternatives to wires infrastructure as awareness grows of technologies like the new advanced STATCOM MMC architectures.

Designed to enable the more efficient use of the grid and existing resources, in most cases STATCOM is a more economically viable solution than to increase the capacity of the grid through other means without extending the network or increasing generation capacity. As such, the versatile STATCOM can fit in multiple gaps as a potential solution to multiple challenges – all of which negate the need for alternative infrastructure investments. STATCOM is just one element in a large and expanding tool box that is evolving in response to changing grid needs. But, like a wild card in poker, for the grid operator STATCOM is key to a full house when it comes to non-wires alternatives.

About the author: Tobias Tepe is head of sales for FACTS and substations at Siemens and is based in Erlangen, Germany.