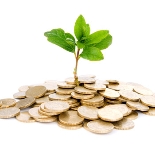 More than $1.2 billion was raised by battery storage, smart grid, and efficiency companies in the first nine months of 2017, up from $910 million over the same period a year ago, according to Mercom Capital’s latest tab of venture and merger financial moves in the sector.