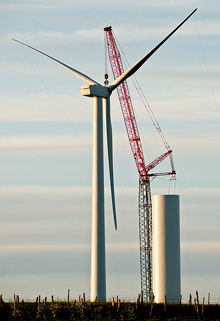 2013 began with a bang for the U.S. wind power industry as Congress passed an extension of the federal production tax credit (PTC), an incentive that has helped spur rapid industry growth as part of the “fiscal cliff” package of legislation.

Throughout 2012, the credit’s impending expiration created a dark cloud of uncertainty over the industry even as it built projects at a record pace to qualify for the incentive.

The industry turned in its strongest year ever, having installed 13,124 MW of electric generating capacity–the previous record was 10,000 MW in 2010–and having leveraged $25 billion in private investment and passed the 60,000 MW mark in installed cumulative capacity.

In the fourth quarter of 2012 alone, 8,380 MW were installed, making it the strongest quarter in U.S. wind power history.

The fourth quarter typically is the strongest period in any given year, but 2012’s late-year surge was augmented significantly by the looming expiration of the PTC.

In another 2012 achievement, wind energy for the first time became the No. 1 source of new U.S. electric generating capacity.

It provided some 42 percent of all new capacity.

Just as striking was the expansion of new customers. Sixty-six utilities bought or owned wind power in 2012, up from 42 in 2011. As Electric Light & Power reported recently, that list includes many familiar industry names such as Xcel Energy Inc., MidAmerican Energy, OG&E Electric Services, Minnesota Power and Alliant Energy Corp.

We also are seeing growth in new customers in the industrial and commercial sectors.

They are purchasing or owning wind energy directly, including companies such as Google, which has invested in wind farms and entered power purchase agreements to power its data centers.

Manufacturers of everything from plastics to lightbulbs, semiconductors and badges, farms and medical centers are purchasing wind power directly.

The prospect of the PTC’s demise at the end of 2012 had caused anxiety throughout the U.S. industry.

Layoffs in the industry’s manufacturing supply chain began before midyear as companies idled factories because of a lack of orders for 2013.

The extension allows the industry to keep providing the U.S. with more clean, affordable energy and to keep growing a manufacturing supply chain that makes nearly 70 percent of U.S.-deployed wind turbines domestically.

The industry again is focused on building more wind projects, maintaining its manufacturing sector and regaining momentum lost during the past year.

The PTC and an extension of the investment tax credit (ITC), important to small community and offshore projects, will allow continued growth of the energy source that has composed 35 percent of all new electric generation in the U.S. during the past five years.

It is prompting the development of a manufacturing supply chain that totals some 500 U.S.-based plants.

Factories that serve the industry or wind farms can be found in all 50 states.

The PTC extension will cover all wind projects on which construction is started before 2014.

Companies that manufacture wind turbines and install them sought that definition to allow for the industry’s 18- to 24-month business timeline for building projects.

To qualify for the credit previously, projects had to be completed and online by its expiration date.

The new extension, therefore, should incentivize the completion of new projects for significantly longer than a simple one-year extension.

Providing that tweak was essential for the supply chain to ramp up again, given the last-minute extension, industry members and experts said.

The wind industry has been reinvigorated by this much-needed signal from congressional leaders.

Rob Gramlich, AWEA interim CEO, has been at the center of AWEA’s external relationships and internal strategic planning for more than seven years. He joined AWEA in 2005 and oversees its federal, state, regulatory, and data and analysis teams. He previously worked as economic advisor to former FERC Chairman Pat Wood III from 2001 until 2005.