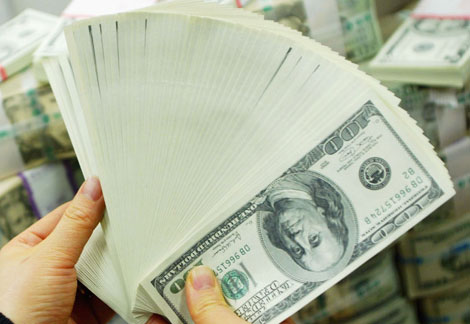 Last year was a mixed bag for the publicly traded electric utility companies as stocks started up and mainly went down. Some investors made money and some did not.

The CEOs of those investor-owned utilities, however, did pretty well in 2015.

All in all, 22 of electric utility’s industry CEOs made at least $2.2 million in salary, bonuses, stock awards, pension and other incentives for 2015, according to the companies’ proxy filings with the U.S. Securities and Exchange Commission. The group was led by Sempra Energy’s Debra Reed, who gained more than $16.1 million in total compensation last year, and that actually was a pay cut from the $16.8 million she received in 2014. Reed received a stock award worth $13.1 million—her biggest since being promoted to CEO in 2011—in January of this year, according to Bloomberg.

Relatively down the list at No. 15 was Dominion Resources CEO Thomas Farrell II. His pay including salary, etc., totaled $9.66 million in 2015. Farrell took the biggest pay cut, by far, from 2014 when he was paid $20.6 million, according to company’s proxy. Dominion’s executive compensation table shows Farrell got about $10 million in 2014 from a non-equity incentive plan.

Who got the biggest raise among electric utility leaders in 2015? Charles Jones of FirstEnergy was missed the top 10 CEO pay list at No. 13, but his $10 million total compensation package was about $5.2 million over the 2014 table.

Ralph Izzo, CEO of Electric Light & Power’s 2015 Utility of the Year Public Service Electric & Gas, ranked 18th with approximately $9.2 million in last year’s compensation. EL&P‘s Large Utility CEO of the Year Terry Bassham, who leads Kansas City Power & Light and its parent company, Great Plains Energy, was No. 20 on the pay scale with $3.5 million. Look at the bottom of this story to see the whole list of the 22 highest paid electric utility CEOs.

Pay is said to reflect performance, or so many proxies and boards say. These corporate leaders are dynamic thinkers and workaholics who guide the companies through an era of declining demand and challenges brought on a witch’s brew of distributed generation alternatives, falling demand and federal regulatory pressures. Many of those CEOs would tell you they look at that as an attractive challenge while many of us might label it a threat to survival.

And, by the way, hardly anyone bats an eye when a mid-level NBA basketball player like Chandler Parson gets a salary worth $22 million annually from the Memphis Grizzlies. Or consider Leonardo DiCaprio, who was enriched north of $25 million—while co-star Jonah Hill was paid only about $60,000 on the front end—for the crass and hedonistic “The Wolf of Wall Street.” Furthermore a few years earlier DiCaprio eventually made $50 million-plus for the inventive but sometimes confusing “Inception.”

That movie was kind of what would happen if “Mission Impossible” was scripted by Sigmund Freud. But, back on point, electric utility CEOs don’t get to live in a dream world. They are under pressure to deliver products which please their customers, of course, but also make investors happy when it comes to stock price, earnings and dividends.

And, holy moly, Forbes ranked Taylor Swift as the top-earning celebrity with $170 million last year. There’s no “Blank Space” in her checking account, to steal a line from one of the stories about Swift’s income.

I need to  “Shake It Off” so back to the subject at hand. The nation’s electrical utility chiefs are handsomely compensated, no doubt, but even they pale compared to the top-paid CEOs nationwide. A story in the New York Times—link http://www.nytimes.com/interactive/2016/05/29/business/how-much-ceos-made-last-year.html?_r=0 —  last  year reported that travel site Expedia’s leader Dara Khosrowshahi reaped $94.6 million for 2015, eight times his previous earnings.

Only a few utility CEOs made that NYT top 200 list, with NextEra’s Robo and Exelon’s Crane among them. A report last year from labor organization AFL-CIO indicated that compensation for CEOs atop S&P 500 companies averaged 373 times what the average worker was paid and had risen 16 percent from 2014.

A U.S. Bureau of Labor Statistics report  — http://www.bls.gov/iag/tgs/iag22.htm – earlier this year found that the average employee in the utilities sector was paid about $1,133 per week (median average), basically flat compared to 2012. The annual median salary, then, would be about almost $59,000 using those averages.

In establishing a median for our list of 22 CEOs, let’s take 10th, 11th and 12th on the 22-person lists: Theodore Craver, retiring CEO at Edison International, Duke Energy’s Lynn Good and DTE Energy’s Gerald Anderson. Lumped together and then averaged by 3, the unscientific media would come to a rounded off $10.7 million.

This number divided by the AFL-CIO median of $59,000 means that utility CEOs are making 181 times what their workers are; a little closer than the overall publicly traded companies, but not by much. And, yes, I admit my calculations are about as scientific as timing the fall of a rock from a junior high stadium ledge and calling it physics, so take a great big salt pill with this medicine if you like.

CEOs themselves often say their main job is to create value for shareholders, and let’s take them at their word. So how did some of the companies helmed by these highest-paid CEOs do in 2015? Mediocre at best, for the most part: Sempra Energy’s closing price of $94.24 per share on Jan. 5, 2016 was down almost 15 percent from the $110.64 closing exactly one year earlier, according to Fidelity.com.

Exelon has grown significantly since 2015, finally getting approval and closing on its acquisition of Pepco Holdings earlier this year. Last year, however, its share price fell from $36.50 on Jan. 5, 2015 to $28.16 on the same date in 2016.

Things are looking up on Wall Street for the IOUs so far this year. Sempra, for instance, has rebounded to the $114 per-share range, Exelon, meanwhile, is almost back to its January 2015 price at $36 as of the press time for this article.

Duke, Southern and AEP, among several others, are way up, even above their early 2015 highs. And utility CEOs are certainly busy this year, pursuing merger partners as the industry consolidates. 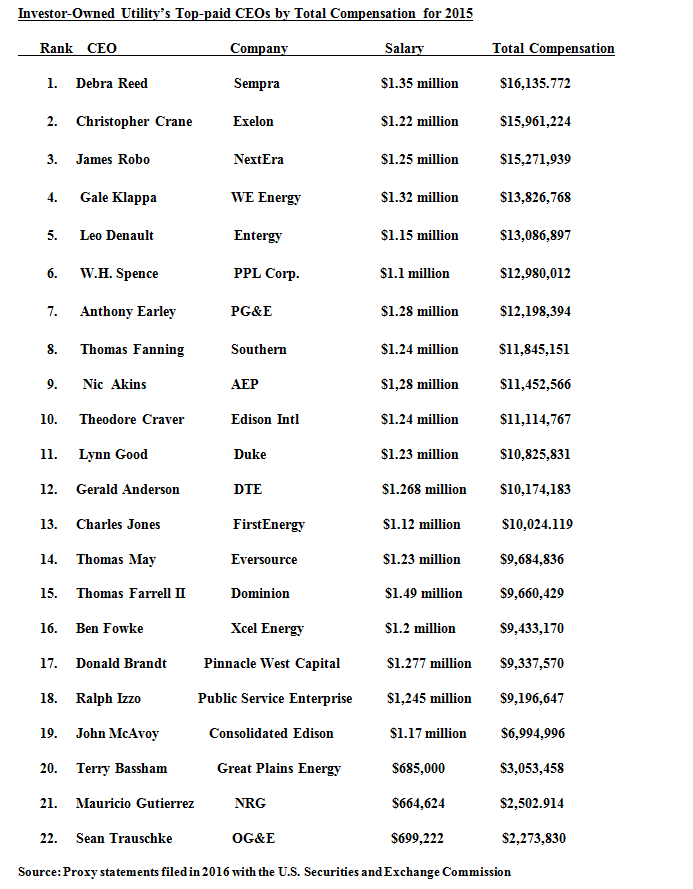