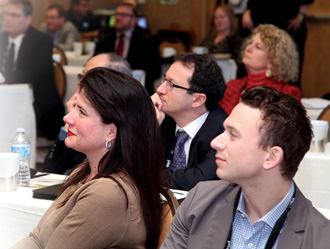 “My father fought for the things he believed in, but he fought with a loving heart,” Reagan said.

Those things he believed in reached far into his home and family matters. The younger Reagan said he asked as a small boy for an increase in his $1 a week allowance, only to be treated to a car ride that included a Ronald Reagan lesson on taxes. The short answer was no raise for little Michael until the country elected a president who didn’t tax so much. That promise came to fruition when Michael was in high school; his allowance grew to $5 a week. Reagan said that despite his father’s hard line on taxes, today people might consider him a rhino Republican.

“Would you even nominate my father today? Because he raised taxes in California,” Reagan said.

Republicans and Democrats, he said, need to work together for the good of the country. He said his father worked well with Democrats, and even people who began as Reagan’s adversaries quickly became his friends.

“Ronald Reagan did it by bringing people to him ” and finding areas of agreement instead of disagreement,” he said.

“I was born missing my right hand,” Abbott said.

“I knew what it was like being different. ” When you do things differently, you’re bound to run into skepticism.”

Abbott’s advice? ADAPT, an easy to remember acronym for adjustability, determination, accountability, perseverance and trust. Abbott explained how he has been adapting his entire life to fit in and be accepted as normal. As it turned out, he excelled instead. He shared how a kind elementary teacher pulled him from class to teach him how to tie his shoes using only one hand. The teacher had been experimenting for a while and finally discovered a way to do it. They practiced until Abbott mastered the technique.

Smart Grid Score Card. Jonathan Woldermariam, director of transmission and distribution engineering at San Diego Gas & Electric (SDG&E), moderated the session that examined how U.S. utilities have spent $3.4 billion awarded in Smart Grid Investment Grants (SGIGs) by the Department of Energy (DOE) through the American Recovery and Reinvestment Act of 2009.

Andrew Bennett, a smart grid industry analyst and international trade specialist with the U.S. Department of Commerce: International Trade Administration, said it would be great to use the score card at an international level. The U.S., he said, will not see the growth expected in China and India. China is expected to invest $600 billion in transmission, including $100 billion in smart grid, during the next 10 years, he said. Worldwide investment in energy infrastructure is expected to hit $16 trillion during the next 30 years, 60 percent of which is electric, he said.

“With any relationship, you have to enter into a giving relationship with your audience,” he said.

Utilities must convey the sexiness of electric power and smart grids, he said.

What’s Your Utility’s Flexibility Inventory and Value? Lawrence Jones, vice president of regulatory affairs, policy and industry relations in North America for Alstom Grid, moderated a session that weighed how utilities can satisfy everyone from regulators to customers.

Mike McMahan, vice president of smart grid and technology at Commonwealth Edison (ComEd), talked about the utility’s storm-hardening efforts. ComEd, he said, plans to spend some $200 million in storm-hardening improvements, $25 million of which was completed in 2012.

On the operations side, flexibility depends on factors such as adequate reserve margins and human capital, plus supplier diversity, fuel diversity, project and process management, regulatory relations and effective corporate governance.

On the financial side, flexibility depends on factors such as access to capital markets, sufficient liquidity, a flexible dividend policy, credit ratings–according to McMahon, a B+ rating is ideal–and regulatory considerations. He said publically traded utilities focus on dividend yield, but privately owned utilities focus on total return and efficient corporate governance. Private ownership of utilities, he said, strikes the best balance between flexibility and shareholder value.

Preparing for Disruptive Events: How Far Should You Go? EPRI Marketing Manager of Power Delivery and Utilization Ivo Hug moderated a session on outage preparation.

Vic Romero, director of asset management and smart grid projects at SDG&E, shared how SDG&E identifies grid vulnerabilities and prioritizes its grid-hardening process. Much depends on regulators, he said.

Paul Centolella, vice president of Analysis Group, also was on the panel. The former commissioner of the Public Utilities Commission of Ohio said that from 2001 to 2010, the number of power outages’ affecting 50,000 customers or more doubled.

He cited estimates by the American Society of Civil Engineers (ASCE) that maintaining the current electricity infrastructure will require $673 billion in new investment by 2020. During that same period, he said, gross domestic product is expected to fall by $496 billion. He said regulators’ historical model breaks down during investment cycles. An emerging model is the U.K.’s Ofgem’s RIIO, in which revenue is set to deliver strong incentives, innovation and outputs.

Brian Deaver, EPRI technical executive in power delivery and utilization, said utilities must be resilient in their physical and information infrastructures. The key to both is prevention, recovery and survivability, he said.

Elin Swanson Katz, consumer counsel at the Connecticut Office of Consumer Counsel, also presented. In August 2011, Tropical Storm Irene hit Connecticut and caused the largest outage the state had ever seen, she said. Two months later on Oct. 29, a Nor’easter brought a foot of snow and high winds. The storm arrived so early in the season that leaves were still on trees and their heft after collecting the snow caused unprecedented damage. One million people lost power, and the event led to many investigations and a yearlong study.

Swanson Katz said after that, most residents would say the two major utilities were unprepared. The next month, Connecticut Light & Power President and Chief Operating Officer Jeffrey Butler resigned after criticism of his handling of the outages.

For a fourth consecutive year, Electric Light & Power partnered with Skipping Stone to survey conference participants to gain insights on energy industry trends and issues. The market research was tied closely to conference topics: utility messaging, smart grid scorecard and utility valuation impacts from complex market conditions, as well as extreme conditions and outage management. A free copy of the full research report is available at http://skippingstone.com. Click on the home page banner.

Growth Potential. Growth potential survey data has been collected for the past several years at the conference. The chart depicts the marked differences in opinions year over year as to where industry growth will be coming from.

Battery storage and electric vehicles have seen a dramatic drop in growth expectations during the past three years. Smart grid technology and energy efficiency growth expectations have risen. Although solar jumped in this year’s survey, it remains to be seen if this is a one-time anomaly or trend.

Smart Grid. Survey participants generally felt government investments in the smart grid grant programs had an average or better than average result. About half said the government should provide more funding for smart grid initiatives.

Opinions were divided on who benefited most from the government funding. Utilities said they were the primary beneficiaries while most others said hardware vendors were the winners. Customers as a beneficiary ranked behind industry participants. In a related question regarding spending expectations by utilities on smart grid initiatives, indications are fairly rosy. A majority said spending will continue at the same pace or higher.

Utility Messaging and Image. A series of questions were asked on how effective utilities are in communicating with customers. In general, utilities’ ability to reach customers with their messages did not attain a favorable ranking. The perception is that customers are indifferent toward utilities and tend to make communications that much more difficult.

On the importance of social media communication between utilities and customers, an overwhelming majority said its importance will grow during the next three years.

Utility Value vs. Investments and Flexibility. Benchmarking which investments can generate the highest return vs. investments that will be required regardless of return on investment creates an interesting divergence of opinions. For high return, utilities focused on smart meters, rate increase or time-of-use rates. Vendors selected demand response and energy efficiency. Regarding necessary investments, both groups selected infrastructure upgrades, and neither looked at transmission and distribution lines.

The creation of new market dynamics produces a need for change in utility earnings models. Research results indicate support for newer structures that take utilities out of commodity supply roles or eliminate commodity supply risk. There is also significant support for structuring utility earnings to incent demand reduction by decoupling or other means.

Utilities and Disruptive Events. During the past several years, weather-related events have caused significant power grid disruptions. Public, political and media awareness has grown, as have customer expectations. The utilities considered themselves somewhat prepared or underprepared. Only nonutility survey participants said utilities are very well-prepared. One conclusion that may be drawn here is that after Sandy, many utility executives realize it is very hard to be prepared for the unexpected. Recognizing they might be underprepared is the first step toward a remedy.

As for how utilities can prepare for disruptive events, it seems that communications, both within the utility with its crews and externally with customers, outweighed the other answers.

The question related to determining a realistic timeframe to restore power resulted in utilities’ overwhelmingly selecting either one or two days. For the most part, nonutility participants agreed; however, a significant number expected restoration within eight hours.

The opportunity to gauge opinions, discuss trends and use the conference’s executive participants for market research has proven extremely valuable for those who attend the Electric Light & Power Executive Conference, as well as those who read about it later. Sharing and discussing several years of trend data and the current research at the conference continues to be an excellent environment to gauge the status, prioritization and attitude of the energy community. If you are an executive in the energy business, you owe it to yourself to attend next year.