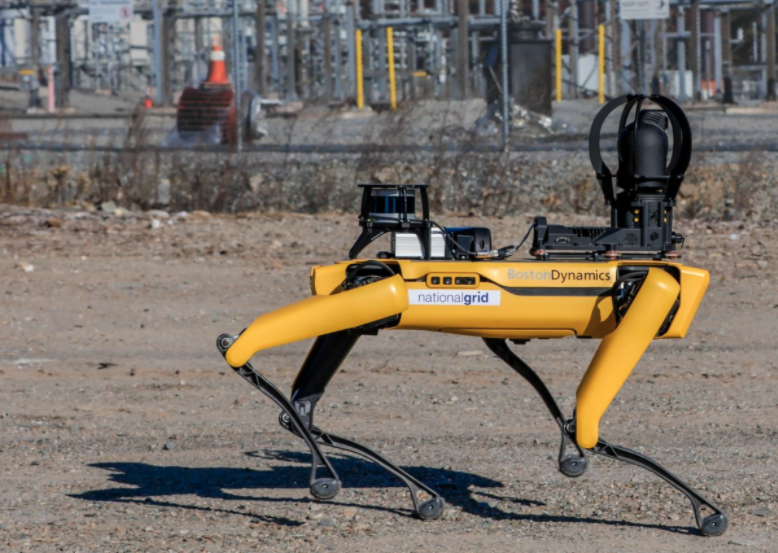 National Grid’s Sandy Pond High Voltage Direct Current Converter Station imports hydroelectric power from the north of Canada for distribution in the northeastern United States. The thyristor valve hall is a 5-story building the size of a soccer field which converts direct current (DC) to alternating current (AC) at the station.

“The angles are limited, and a person most certainly cannot get close to the active thyristors because of the electrical hazard,” says Dean Berlin, lead technology analyst for National Grid.

This has motivated National Grid to explore novel asset inspection solutions using the HVDC station as a pilot location. Robotics solutions, which can be deployed without putting humans in harm’s way, seemed like a natural solution for inspecting the valve hall without shutting it down, said the company. But in order to make sure the idea would work engineers needed to confirm that a robot could withstand the electrical field of the facility, traverse uneven flooring, and navigate the valve hall without getting too close to the equipment.

“This type of facility is fairly uncommon,” notes Berlin. “To the best of our knowledge, a robot had never been inside an energized thyristor valve hall before.”

Putting Spot to the Test

National Grid began exploring Spot, the quadruped robot from Boston Dynamics, shortly after a scheduled shutdown at Sandy Pond Converter Station. The team’s largest concern, initially, was whether Spot could withstand the electrical field of the thyristor hall.

“We didn’t want the electrical field to disrupt any of the electronics inside the robot or for the robot to affect the sensitive thyristors, so we did some tests on that,” Berlin says.

“Secondly, we were also concerned whether it could maintain the appropriate approach distances. Even though the robot can be inside these areas of the hall, it could not get closer than nine feet to any energized equipment, or 10 inches to the walls. We wanted to make sure that even though a human may be driving the robot, the operator couldn’t accidentally plow it into equipment. We wanted to proceed very cautiously.”

The team measured the field strength inside the valve hall and outside in the yard and found the valve hall to be comparable to an outdoor AC filter yard, so they used the outdoor yard as a proxy to test robot maneuverability in the presence of energized equipment.

“There were a lot of things to be considered before trying to use Spot,” notes Sid Ashok, manager of HVDC operations and engineering lead for National Grid.

“We checked if there was any electromagnetic interference. We’re entering a zone where on the DC side, it’s 450,000 volts, and on the AC side it’s 345,000 volts. We wanted to make sure that wasn’t affecting Spot’s capabilities, and we also wanted to make sure Spot wasn’t affecting any of the equipment. We had a couple of test runs – very extensive tests – and we made sure we didn’t get any interference.”

National Grid introduced Spot into the thyristor hall at Sandy Pond Converter Station just a few days before the facility’s shutdown period. The robot was equipped with both a high-resolution 30X optical zoom pan/tilt/zoom camera and an infrared (IR) camera to detect signs of potential problems.

A top priority at the facility is the monitoring of equipment conditions. Because the valve hall is water-cooled, any leaks could cause issues leading to equipment overheating and malfunctioning. While stationary cameras could detect signs of water leaks in certain locations, there’s no way for those cameras to cover every angle of the valve hall.

With the optical zoom camera, Spot was able to inspect the equipment during operation. Just as importantly, the IR camera allowed the robot to detect “hot spots,” where the equipment is hotter in some areas than others.

“The operator driving the robot is looking for evidence of any leaks, and the tell-tale clues to an experienced technician could trigger an investigation into that part of the valve stack,” Berlin says.

Hot spots can also be caused by mechanical problems with bushings – the places where electrical lines connect. “From an IR perspective, you look for these hot spots, and they are indicative of areas where there needs to be some mechanical treatment done,” Berlin says. “Having these images in advance, knowing the condition of the bushings, and knowing that there may or may not be any leak – this information is extremely valuable.”

The thyristor hall inspection is a relatively straightforward application for Spot, and it’s one that perfectly illustrates the value proposition of using mobile robots. National Grid plans to start out with two Spot robots at Sandy Pond Converter Station, and Berlin says the robots could deliver operational savings by giving employees an important tool to monitor the station.

“Being able to have Spot do inspections controlled by human operators gives an extra layer of safety and extra layer of troubleshooting for technicians and engineers,” Berlin says.

Berlin also hopes that National Grid may eventually use Spot – both at the Sandy Pond Station and at other facilities – to conduct routine readings and track metrics over time.

“There are several pieces of equipment that are checked on a routine basis,” Berlin said. “Getting regular, standardized thermal and optical imagery from them correlated with their operating conditions could be extremely valuable for predictive analysis. We could train Spot to do an Autowalk mission, where it goes around to each of these pieces of equipment and takes a picture from a defined angle, and then catalogs it. We could then very easily get a longitudinal analysis of what’s going on.”

This process would also allow National Grid to perform condition-based maintenance, rather than performing maintenance at set time intervals. Still, Berlin says that Spot’s highest value would be improvements in employee safety.

“The safety of our employees is of the utmost importance,” he says. “So, if we can further remove them from harm’s way and still allow them to be efficient and effective, we are doing a good job.”

Watch a video of Spot at work below!