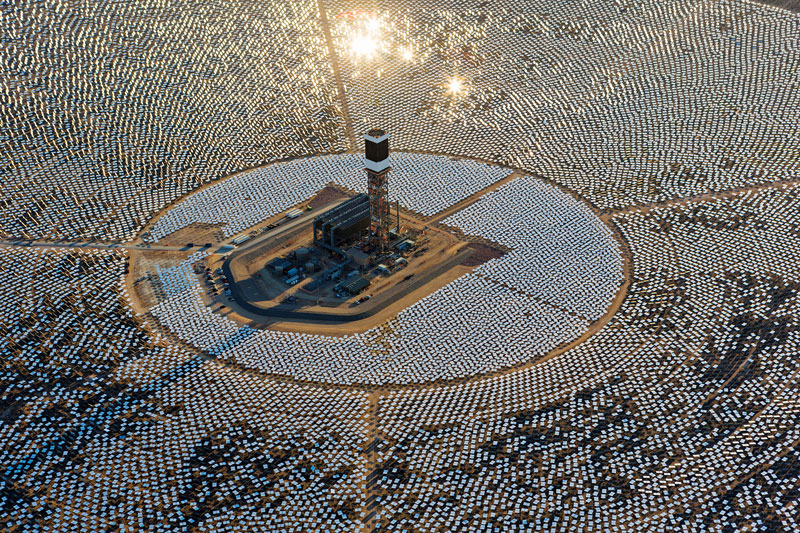 Engineers at Oregon State University have identified a new approach for the storage of concentrated solar thermal energy, to reduce its cost and make it more practical for wider use.

The advance is based on an innovation in thermochemical energy storage, in which chemical transformation is used in repeated cycles to hold heat, use it to drive turbines, and then be re-heated to continue the cycle. Most commonly this might be done over a 24-hour period, with variable levels of solar energy available at any time of day, as dictated by demand.

The findings have been published in ChemSusChem, a professional journal covering sustainable chemistry. The work was supported by the SunShot Initiative of the U.S. Department of Energy, and done in collaboration with researchers at the University of Florida.

Conceptually, all of the energy produced could be stored indefinitely and used later when the electricity is most needed. Alternatively, some energy could be used immediately and the rest stored for later use.

Storage of this type helps to solve one of the key factors limiting the wider use of solar energy – by eliminating the need to use the electricity immediately. The underlying power source is based on production that varies enormously, not just night and day, but some days, or times of day, that solar intensity is more or less powerful. Many alternative energy systems are constrained by this lack of dependability and consistent energy flow.

Solar thermal electricity has been of considerable interest because of its potential to lower costs. In contrast to conventional solar photovoltaic cells that produce electricity directly from sunlight, solar thermal generation of energy is developed as a large power plant in which acres of mirrors precisely reflect sunlight onto a solar receiver. That energy has been used to heat a fluid that in turn drives a turbine to produce electricity.

Such technology is appealing because it’s safe, long-lasting, friendly to the environment and produces no greenhouse gas emissions. Cost, dependability and efficiency have been the primary constraints.

“With the compounds we’re studying, there’s significant potential to lower costs and increase efficiency,” said Nick AuYeung, an assistant professor of chemical engineering in the OSU College of Engineering, corresponding author on this study, and an expert in novel applications and use of sustainable energy.

“In these types of systems, energy efficiency is closely related to use of the highest temperatures possible,” AuYeung said. “The molten salts now being used to store solar thermal energy can only work at about 600 degrees centigrade, and also require large containers and corrosive materials. The compound we’re studying can be used at up to 1,200 degrees, and might be twice as efficient as existing systems.

“This has the potential for a real breakthrough in energy storage,” he said.

According to AuYeung, thermochemical storage resembles a battery, in which chemical bonds are used to store and release energy – but in this case, the transfer is based on heat, not electricity.

In comparison to existing approaches, the new system could also allow a 10-fold increase in energy density – it’s physically much smaller and would be cheaper to build.

The proposed system would work at such high temperatures that it could first be used to directly heat air which would drive a turbine to produce electricity, and then residual heat could be used to make steam to drive yet another turbine.

In laboratory tests, one concern arose when the energy storage capacity of the process declined after 45 heating and cooling cycles, due to some changes in the underlying materials. Further research will be needed to identify ways to reprocess the materials or significantly extend the number of cycles that could be performed before any reprocessing was needed, AuYeung said.

Other refinements may also be necessary to test the system at larger scales and resolve issues such as thermal shocks, he said, before a prototype could be ready for testing at a national laboratory.