The U.S. Supreme Court will hear appeals from industry groups and representatives from coal-producing states as they consider the Environmental Protection Agency’s proposed rules to limit greenhouse gases.

The justices said October 15 that they would examine the question of whether the EPA is justified in pursuing these regulations to cut carbon dioxide and other greenhouse gas emissions as the Obama administration makes efforts to impose the country’s first-ever federal limit on such emissions.

Specifically, the justices will consider “Whether EPA permissibly determined that its regulation of greenhouse gas emissions from new motor vehicles triggered permitting requirements under the Clean Air Act for stationary sources that emit greenhouse gases.”

The EPA has been working toward writing rules to limit emissions from future power plants and existing power plants since the agency found that carbon dioxide represented a threat to public health. 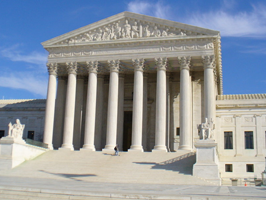 Meanwhile dozens of trade groups plus the governments of more than a dozen states have filed petitions asking the Supreme Court to review facets of the EPA’s proposed rules for carbon regulation.

The Supreme Court will not revisit the debate over this endangerment finding, however, according to reports.

Instead, the question the court will be investigating is whether the EPA overstepped its authority when it decided to write regulations of greenhouse gases under the authority of the Clean Air Act.