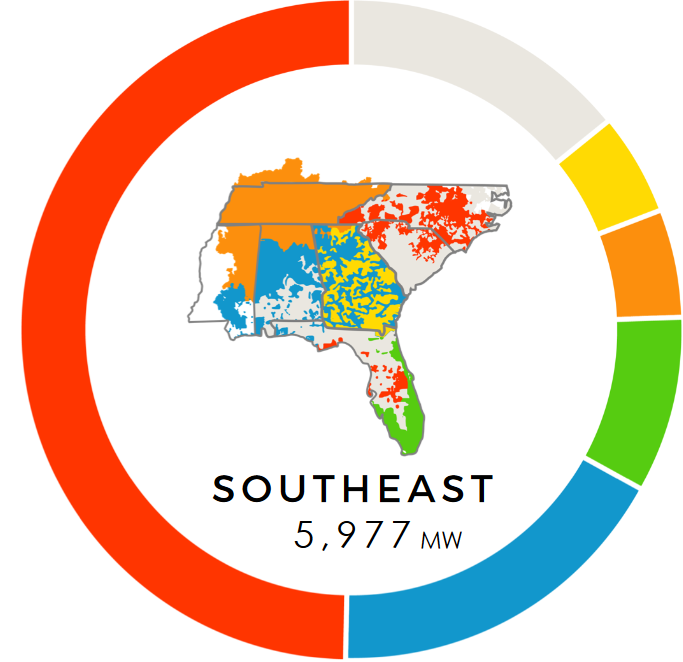 The Tar Heel State certainly is sun-friendly when it comes to energy, ranking second only to California nationally in installed capacity at more than 3,000 MW, according to the Solar Energy Industries Association (SEPA). Overall southeast U.S. capacity has risen from a few megawatts to more than 5,000 MW just in the past decade, according to the alliance’s “Solar in the Southeast 2017 Report.”

Duke Energy Progress, which serves the eastern part of North Carolina, holds first place by long shot with an average 1,117 watts of utility-scale solar per customer (WPC). Progress is expected to retain that ranking by rising to 2,315 WPC by 2021, according to the report.

Duke Energy Carolinas takes a distant second with 474 WPC. Georgia Power is third with a 364 average while South Carolina Electric & Gas and Oglethorpe Power are fourth and fifth, respectively.

Many southeast utilities are expected to raise that sunny disposition in the next four years. In addition to Duke Energy Progress, SC Electric & Gas may add 1,034 watts of solar per customer by 2021, while Tampa Electric is forecast to increase by 781 WPC.

The southeast region of the U.S. hit almost 6,000 MW of solar capacity by the end of 2017, according to the Southern Alliance report. The region includes Florida, Georgia, North Carolina, South Carolina, Tennessee, Alabama and Mississippi.

Alabama brings up the rear of the regional’s sun initiative with 75 MW, according to report. However, the Yellowhammer state may hit solar hard in coming years, projecting to more than quintuple its capacity by 2021.

North Carolina and Georgia (1,432 MW) are the only two southeast states listed in SEPA’s top 10. California is far and away No. 1 nationally with more than 18,000 MW of installed solar capacity.

The Southern Alliance report is available at cleanenergy.org.