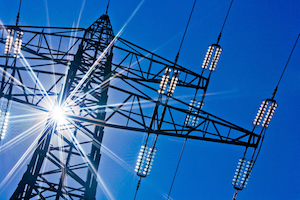 In 1885, the introduction of a practical transformer put an end to localized DC electric supply, triggered the shift to AC, and started decades of growth in generator size, in transmission voltage, and the reach and sophistication of transmission networks – their architecture driven by the need to deliver power from fossil-fired power plants sited near coal supplies and cooling water, to load centers. As low-cost power producers sought markets outside their franchise, as utilities saw benefits in reserve-sharing, and as time-zone diversity introduced incentive for long distance power transport, networks became strongly interconnected and transmission distances increased. Through much of those years, new rights-of-way were easy to obtain. Those were the “old days.”

The “new days” will be different.  As electricity usage continues to grow, driven in part by increased dependence on electric vehicles, acquisition of new rights of way may be made even harder by political interests defending fossil-fired generation infrastructure. In the end, however, systems dominated by renewable resources will:

4.      Increase both centralized and load-proximate energy storage, thus limit transmission demands and shifting more of its task from delivery of kW to delivery of KW-hours;

6.      Increase incentives to upgrade existing AC transmission line capacity by reconductoring and/or conversion to DC; and

7.      Increase the likelihood of HVDC supergrids to allow easier inter-regional power exchange and greater utilization of the systems within such grids.

The last decade has seen an increased interest in the conversion of AC lines to DC; one of which will carry power generated in the North Sea to loads in central Germany.  Why does AC-to-DC conversion make sense when it renders one of three conductors inactive except as a ground return? Removing one phase position from service would seem to drop rating by a third, but DC operates at crest voltage continuously, making more efficient use of insulation, thus increasing MW rating by à¢Ë†Å¡2 to bring the DC bipole almost to par with AC if DC voltage is limited to AC crest.  But AC voltage is fixed by network standards while DC voltage can be as high as conductor gradient, insulation, clearances, ground-level field effects and audible noise will allow.  Approaching those limits usually allows a DC voltage substantially higher than AC crest. DC’s transient over-voltages can be much lower AC’s. Ground level field effects (an important limit with DC) can allow DC voltage to be higher than AC line-to-ground crest. Conversion can usually increase MW rating at least 50% — substantially more if conductors are replaced by a high-temperature, low sag (HTLS) option of equal diameter, thus keeping tower and footing loads unchanged. That boost comes at a high price since a conversion gain of 50% needs terminals rated 150% of original loading. The prospect of AC-to-DC conversion must be weighed against capacitive compensation or FACTs-supported measures to increase AC loading. Yet there’s more to a circuit’s usefulness than its maximum loading.  Allowable loading of a DC monopole is greater than for an AC circuit since (1) AC loading is governed by network dispatch while DC can be controlled to use a circuit’s full thermal capability and (2) DC’s redundancy will favor (N-1) loading limits.

Development of a DC-DC transformer capable of linking HVDC lines differing in either or both grounding or commutation systems, was acknowledged as a supergrid prerequisite.  That triggered efforts to develop such a transformer, the simplest of which is the Multimodule DC Transformer (MMDCT), an elementary building-block of which is shown here [1]. It consists of a large number of series-connected capacitor half-bridge modules — basically, a re-application of an arm of a modular multi-level converter (MMC), now found in many voltage sourced AC-to-DC converters. 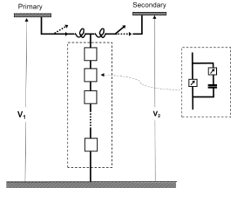 The MMDCT functions by first causing a resonant charge exchange with a high voltage bus and then, with the capacitor column reconfigured with fewer capacitors in series,  a resonant exchange with a lower voltage bus. In its elementary form, the MMDCT produces a series of half-wave current pulses within both primary and secondary busses. With three such configurations in parallel, each equally offset in time, the MW rating triples and both primary and secondary current wave forms are filterable. The concept illustrated in the above figure can be configured to transform between more than two DC busses and between busses having different grounding and/or commutation systems. By using a switching frequency much higher than power frequency, the MMDCT can also achieve DC to AC transformation and has the potential for constant-ratio AC-to-AC transformation, suggesting the eventual prospect that solid-state alternatives may one day displace oil-filled magnetic AC transformers.  Today that substitution would be more expensive by 3:1 or more. But considering that (1) transformer prices escalate at roughly 7% a year while DC converter stations (notwithstanding the rising cost of their magnetic transformers) have been declining; (2) unlike magnetic transformers, solid state technology is still evolving and will see cost benefits with market growth; (3) solid state AC-AC transformers, having internal redundancy, need no on-site spares; and (4) solid state transformers would eliminate oil handling and the environmental risk of toxic transformer oil spills.

1.      Global warming will dramatically change the demands on transmission systems whose architecture is inherited from an era of fossil fuel’s dominance.

2.      Shortages of new rights-of-way will intensify efforts to upgrade existing AC lines, through (a) replacing conductors with new high-temperature, low sag conductor options, (b) use of FACTS and series compensation, and (c) conversion to DC.

But forecasting technology is a risky game. 1950 (mid-century) forecasts envisioned 1,000 kV transmission networks, mega-turbines, and helicopters in every home by the year 2000, thus suggesting caution in imagining trends in the next fifty years. Yet reviewing the upsets imaginable over the next 50 years, e.g., cyber-attacks, technical break-throughs in generation, transmission, and storage technology, and escalation in damage from climate change, most are likely to speed up rather than side-track the evolution cited above. Political denial of climate change can’t survive many more mega storms.

The resurgence of nuclear power presents a more acceptable, if unlikely, upset to the renewable revolution—one that would make better use of the existing grid. The reduced likelihood and localization of an accident with today’s nuclear technology seems like a better bet than certain degradation of the world’s environment resulting from continued fossil fuel consumption. 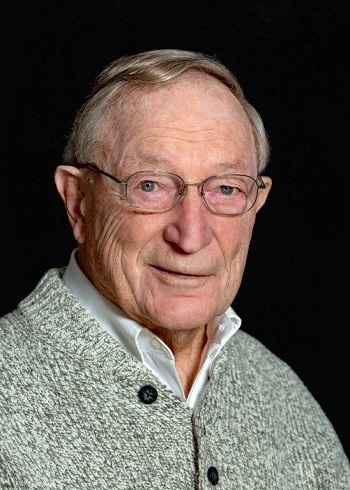 About the author: Lionel O. Barthold, a past president of IEEE’s Power Engineering Society, is receiving the 2019 IEEE Medal in Power Engineering “for outstanding contributions to and leadership in advancing the technologies of electric power transmission” at the IEEE Vision, Innovation, Challenges Summit and Honors Ceremony, Friday, May 17 in San Diego. Barthold’s early work on transmission system design parameters ranged from circuit breaker reclosing times to insulation levels of both lines and high-voltage equipment. He founded Power Technologies, Inc. (PTI) in 1969, which served as a technical consultant and software resource to utility companies around the world during a very rapid expansion of high volt transmission systems. His recent work has centered on a capacitor-based DC-to-DC transformer, which functions within a DC grid as a magnetic transformer does within an AC grid. Such a transformer has been considered as a key requirement for development of high-voltage DC “supergrids.” An IEEE Life Fellow and member of the U.S. National Academy of Engineers, Barthold is an inventor and consultant living in Queensbury, NY.