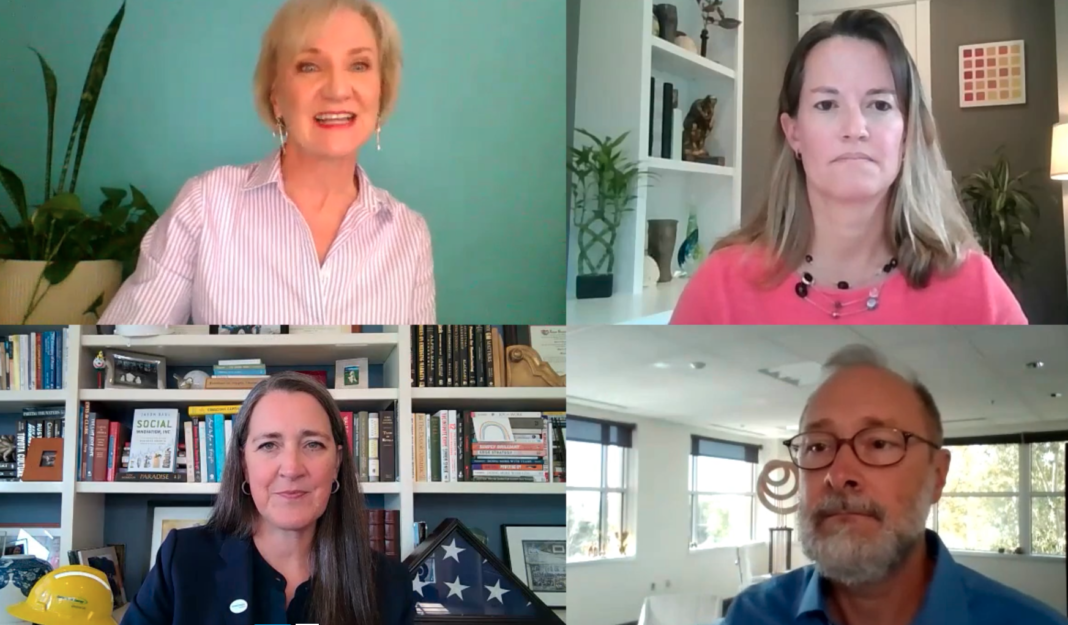 Last month, Julia Hamm, CEO of the Smart Electric Power Alliance (SEPA) moderated a panel with two utility CEOs who are on the forefront of leading decarbonization efforts for their utilities. The panel was part of the first virtual DISTRIBUTECH ever to take place.

According to Hamm, there are 57 utilities with publicly stated carbon or emission target reduction goals and 32 of those are for net zero by 2050 or sooner. That means that more than 2/3rd of the US population is served by a utility with a carbon-emission target.

The two pioneers she interviewed are not heading up utilities in what you might describe as the most typical forward-looking regions of the United States, which is why their drive to decarbonize is noteworthy. We’ve pulled out some of the highlights below. If you’d like to watch the whole interview, you can register for DISTRIBUTECH plus here and watch the session on-demand. It’s very much worth your time.

The Path to Decarbonization

Poppe: Our combined methane and carbon reduction objectives are built on our track record, we’ve retired seven of our 12 coal plants already, our public commitment includes dates for the remaining five coal plant closures, through that 2040 time period, but some of them in 2023. And then again, in 2030, we’re also planning to add 6000 megawatts of solar in Michigan. And people do say to me, “˜Patti, do you live in Michigan, it is not sunny all the time.’ But we have a great plan for integrating solar to serve our peak demand in Michigan.

We’re really bullish on the clean energy future. Part of our plan is a heavy emphasis on energy efficiency and demand response because technology has enabled us to optimize demand and actually manage the grid in a much more dynamic way than ever before. So, we’re pretty excited about the use of technology to make this clean energy vision come to fruition.

Highley: We were able to come up with a plan and because of the incredible low cost of new renewables in the West, actually green up the portfolio while reducing costs to our members. So that’s something [lower costs] everyone can agree with. And it’s allowed us to announce in January this year, our responsible energy plan where we would accelerate the retirement of one existing coal plant, which closed at the end of 2019. And then we announced the closure of the coal we operate in New Mexico by the end of this year, which is already burned its last ton of coal now, so that’s early. And then the closure of the Craig Station in Colorado, which will eliminate all of our coal footprint in Colorado, in phases between now in the year 2030, as we build out another thousand megawatts of renewables between now and 2024, which will take us to a 50% renewables delivered to members by 2024.

Then another 2000 megawatts of renewables between then and 2030, that drives a renewable percentage up to 70. And 80%, allows us to decarbonize and meet the state commitments for decarbonization. And then we do have a goal of 100% by 2040. And so that’s our path forward. And again, all enabled by the incredible low cost of new renewable energy.

Poppe: We have a purpose at CMS energy: world class performance delivering hometown service, and we measure it with the triple bottom line. And that mantra, those words, that mindset was extraordinarily powerful for us when we started writing our clean energy plan. And we had a first draft and it wasn’t, let’s just say it didn’t quite meet the planet threshold that we had expected. And so when the engineers came forward with their standard issue, here’s what’s required, we could lean into our purpose, our triple bottom line and say, “˜wait did you solve for the triple bottom line?’ And just that simple phrase, changed their minds, changed their willingness to consider alternatives.

We challenge some of the assumptions that were, you know, buried deep in some models that kick out renewables as uneconomic. But when you dig into the assumptions, we discovered that they were quite economic, and conditions were changing as we were doing the modeling. And so I think from a culture and change management perspective, anchoring in our purpose, and our triple bottom line, has been a game changer for us and being able to really put forward a very aggressive clean energy plan.

Highley: Patti, you just nailed it so much that words really do matter. Sometimes we think that’s just fluff. But it is not. And you have to continually preach your purpose”.So as I came on board with TriState, the first thing was to start talking about the biggest picture, what is our mission? And what can we agree with? And so within months, the board had approved, the simple three words: reliable, affordable, responsible, we’re going to drive towards that.

So then the responsible energy plan development began with stakeholders in the region. And a former governor who had a loud voice in terms of this area, along with heads of the environmental NGO organizations, organizations that we formally would have been reluctant to engage with. But frankly, they can be partners in this transition. And then it is the easiest thing in the world if you say, “˜I can do this while lowering your cost. There’s no premium here, it’s a reduction in cost.’

Poppe: We have trained people for decades that there is sort of the sucker’s choice, you can have clean and expensive energy, or cheap and dirty stuff, take your pick. It’s just not true anymore. And so, for us to engage others, we had to make people believe our motives; make people believe that we had had a change of heart; we believe that climate change is happening. And in the past, we wouldn’t even discuss it. It’s taken a lot for us to earn the trust of people who previously would have been quite suspicious of us. But we’re finding that those relationships are continuing to make us better and continuing to enable us to move faster on this clean energy transition.

Highley: What we did was put onto one page, every element of our strategy. It starts with our core values and our foundation, and what we believe in as a co-op. And we’re vetting this with the employees right now and saying, “˜is this really what you believe.’ We got a whole team of leaders in the company that are now engaging, I mean, like middle management leaders, who are saying we’re going to make this the tri state’s document. It’s got all our goals here for reliability, affordability, greater member flexibility, responsibility to the environment, to the communities that are in transition, that one’s huge.

Poppe:  I remember a Saturday morning when we were in the midst of all this planning and I got a text from my head of electric grid integration, who was our vice president in charge of our clean energy plan and all the modeling”And I remember his fundamental question was this. What if we’re wrong? He could do math that made it work. But there are assumptions in every model, there are assumptions which inherently make every model wrong.

And I told him, I said, Tim, you can count on the fact that we are wrong, but we have 20 years to figure it out.

When you’re a leader trying to create a breakthrough and trying to make something true that isn’t true today, the question is not: “˜Is it possible’, but rather, “˜what would have to be true to achieve this outcome?’ And then instead of people having to put probabilities on right or wrong, you’re just asking them the question, what has to be true? Well, solar prices have to be x and capacity factors have to be y. And battery storage has to be available at this scope and scale. And so when you say these things, it’s much easier to say, well, let’s go make those things happen.

On What a Challenging Year 2020 Has Been

Poppe: Our culture has five values: caring, empowerment, deliberate, agility, and ownership. And these values were exactly what was required to deliver our performance in spite of all of the challenges facing us.

We did this really neat exercise as a team. We had a company come and facilitate a storytelling session with us. They have taught us that culture is bred through stories, and that legends are created inside organizations and those legends are spread about who we are through those stories. And we knew that 2020 was a story to never be forgotten for all of the reasons that you mentioned Julia. So we reflected as an officer team, with this facilitator to write the story of 2020 what actually has happened, and it was very emotional.

I will tell you when we realized everything we had been through together – and we had members of our team who had experienced significant loss, whether it’s through COVID, or real pain associated with the racial injustice that still exists in our world – when we as a team just together reflected on that, and realized that with our values, standing for the triple bottom line, there was nothing that we could not do together, we have not only survived, we have thrived during this time. It was very empowering, to really reflect and step back.

I encourage all the organizations that are tuned in today, to take a minute and just capture this time, in this moment, all of our organizations have stepped up in amazing ways. Remind yourself and remind your team, so they can feel good about the progress that’s been made.

Highly: I want to work for your company, Patti.

I was really concerned that with the pressures of COVID and our member systems that are seeing significant reductions in revenue. I thought the first thing to go out the window would be that commitment to renewable energy. And you know what really helped us was that these investments are not only getting us greener but they are lowering our costs, they’re stabilizing our rates. So we’re not going to be subject to the fluctuation of fossil fuel markets. And they’re also investments in our communities that need it so badly right now. So making those commitments, and sticking with them, was really important.

Editor’s Note: Those are just a few highlights from what was a very enlightening conversation. If you’d like to watch the whole panel discussion, simply register and join the DISTRIBUTECH+ community and scroll to the event, which took place on September 24, 2020.