The approaches to critical asset management cover the entire range from ignoring the problem to hypochondria. The realistic approaches address the financial truth that inadequate monitoring and running till failure is the most expensive and most dangerous approach possible while avoiding the excessive use of technology to the point additional investment no longer generates additional return.

Traditional monitoring uses intermittent or periodic inspection-possibly visual and possibly using thermography. Quarterly or semiannual inspections are made. If the equipment is to be monitored while operating, then safety windows and cameras are required, and, in many utilities, workers must put on personal protective equipment before inspection. Opening a system without safety windows can cause latent failures.

Sensors for continuous monitoring have been offered for years, and, more recently, robust and complete systems that meet the requirements of retrofit and original equipment manufacturer (OEM) systems integrators have made it to market, allowing these service providers to offer end users complete systems.

In all cases, the systems have the shielding of metal-enclosed switchgear so the fixed site can be made to comply with CISPR11 class A limits, making the final system an unintentional radiator instead of a radio transmitter.

Intermittent examinations have saved countless lives, have avoided serious outages and are far superior to doing nothing. That said, there are still unacceptably high numbers of accidents, all of which could have been prevented using continuous monitoring. One example of a near miss occurred during installation of sensors in a Florida-based peak power plant. The site used a six-month interval for full teardown of each generator circuit breaker, dictated by the seasonal load cycle of their grid. Some five months into one such interval, the breaker was pulled to allow sensor installation. 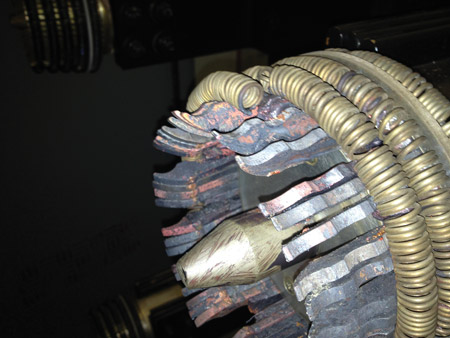 Pictured is a completely corroded contact on a 5-kA generator circuit breaker part way through a periodic inspection cycle.

The ferrous spring had deteriorated rapidly because of intermittent start-ups from a high-humidity environment, first causing loosening and overheating, then annealing and finally oxidization of the iron and copper parts.

Two other generator circuit breakers at the same plant with no visible signs of deterioration were instrumented; as the data acquisition system was being configured, however, one of these generators was called into service. Two contacts were seen to be operating at higher temperatures than the other contacts, suggesting a developing problem. Periodic inspections neither would have allowed the operators to avoid the certain explosion if the first generator had been called into service nor would it allow the predictive maintenance that has occurred subsequently on the other generator.

Site acceptance testing was expedited by the continuous monitoring of all potential hotspots as opposed to relying on one or more teams to sequentially monitor the systems with thermography. The immediate detection of issues at any hotspot makes commissioning safer, as well as faster, potentially saving lives while saving money. 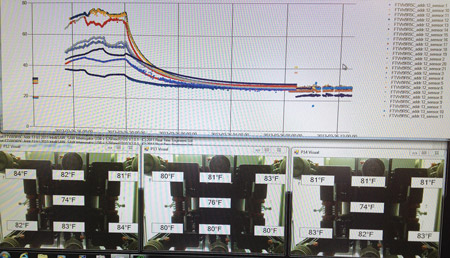 Pictured is a strip chart during operation of an adjacent generator that has just been visually inspected.

The use of continuous monitoring has detected problems during commissioning and shortly after commissioning in many installations. In one case, testing of temperature rise under load during the commissioning of a substation revealed an improperly affixed post in one of the switchgear. Because the systems were being stressed past the rated currents in the test, alarms where all of the sensors read the same were not a concern; the indicated differential alarm, however, was a significant concern.

In another substation, the site acceptance tests revealed no defects; approximately two months later, however, the continuous monitoring system raised a differential temperature alarm. Before adopting continuous monitoring, this operator had employed quarterly periodic inspections and likely would have missed this event.

The differential alarm was traced to a broken support insulator that had been cracked during installation but passed all visual and functional inspections. The crack propagated until the conducted current to earth was sufficient to cause heating of the nearby sensor.

In switchgear monitoring, measurement of contact heating is the most critical need at lower voltages and higher currents (less than 15 kV and greater than 500 A), while dew point monitoring and partial discharge gain importance with increasing voltage. Typical installations will locate sensors on the feeds from the bus bar to the circuit breaker input posts, on the copper bars between the current transformers and cable bolts, and in some cases on the copper bars between the output posts of the breakers and the current transformers. This results in either six or nine measurement points per switch cabinet. Thermography often is limited to only the cable ties because line of sight is needed from a safety window. In some cases, an additional sensor is placed on the chassis of the cabinet to provide ambient temperature. In others, a wired sensor for ambient temperature and dew point is employed.

These ambient temperature sensors are used because the critical issue is temperature rise of the hotspot above ambient, not the absolute conductor temperature.

Identical approaches are relevant to transformers and other critical assets, with the role of breaker inputs and outputs being replaced by transformer primaries and secondaries.

Bus ducts consist of one or more energized phases in an enclosed duct.

In addition to temperature monitoring at the bus bar joints, the ducts can be subject to tracking faults on plastic spacers and flashovers in condensing humidity conditions.

Even when conditioned air is used to ventilate the ducts, failures have occurred-either because of air leakage along the duct or because of failure of the air drying units.

Tracking is a surface leakage current along the surface and is made worse by polluted environments’ depositing dust and condensing humidity on the surfaces. The fault eventually progresses to a full flashover, and the bus duct is destroyed.

To monitor the performance of dry air blowers in such a bus duct, three humidity sensors were placed along the duct between the generator circuit breaker and transformer.

Conduit was run along the underside of the duct, and National Electrical Manufacturers Association (NEMA) boxes protected the field wiring junctions at each sensor.

Data from the sensors was integrated to the local supervisory control and data acquisition (SCADA) and then passed up to regional operations for systemwide availability.

The monitoring systems may be operated in stand-alone mode using a local meter display or may be networked to a central control room through SCADA, depending on the needs of the end user.

Stand-alone systems offer an incremental improvement over intermittent measurements for manned substations; the trend, however, is automation of unmanned substations for efficiency and safety reasons.

Distributed assets might be inconvenient to wire to the control room, although central data is desired. In one application, 900-megahertz packet radios using encrypted RS485 packets over frequency-hopping spread-spectrum radios were used. 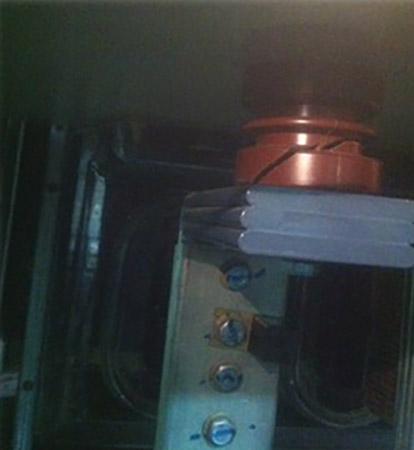 This photo shows that the continuous monitoring alarm was confirmed by thermography after which the defect was identified and repaired.

The system employed one server radio at the control room and four client radios at the four generators being monitored. MODBUS remote terminal unit (RTU) then was collected by a gateway and transferred to the primary SCADA.

Projects in remote locations may use 3G/GPRS/GSM RTU to reach the central SCADA.

Several cellular routers are suitable for monitoring one or more MODBUS RTU slave devices, parsing the data and sending updates from remote installations to a central server.

The simplest of these RTUs employs serial port forwarding of MODBUS-RTU polling requests from a trivial SCADA system.

These systems are data-intensive because of the use of polling, but the simplicity of the approach allows different gateways to be used. 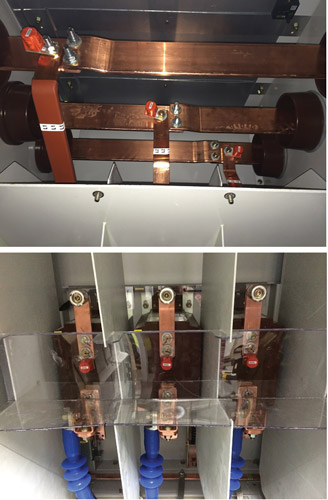 This photo shows sensors on the bus bar feed contacts and between the CTs and cable junctions on 24-kV rated feeders. Placing sensors between the breaker outputs and the CTs would have been difficult for the switchgear after site installation but is easy in factory installations.

Traditional SCADA integration is also readily performed using many OEM relays and meters. Integration of the monitoring systems to IEC61870-5-104 has been performed using an Eaton RTU, pending deployment on distribution transformers in the Netherlands.

Some of these systems integrate human machine interface (HMI) functionality while others support an external display as a slave HMI.

Improvements in asset monitoring during the past decade have led to ever-decreasing losses and ever-increasing safety in power grid operations. Infrared windows and the capability to perform online intermittent monitoring of live assets was a step in reliability and safety.

Nonetheless, several potentially catastrophic accidents that would have been missed by traditional intermittent monitoring were avoided by using passive, wireless monitors in continuous monitoring systems.

These systems allow noncontact monitoring of critical junctions in the asset where line of sight might not be available and report data as soon as status change is detected.

Alarms are raised as levels exceed warning thresholds, allowing service to be planned before damage occurs.

Data is readily passed along the smart grid, allowing data analytics to be added in network operations centers for further operational optimization.

Jeffrey Andle received a doctorate in piezoelectric sensors from The University of Maine in 1993. He has numerous publications and patents in the field. Since 2008, he has led the R&D teams that have commercialized SAW sensors for electric asset monitoring and developed wireless sensing platforms for MV switchgear.

Jonathan P. Murray is director of products at IntelliSAW, where he focuses on delivering comprehensive critical asset monitoring platforms. He has a bachelor’s degree in electrical engineering from the University of Massachusetts and has focused on automation and power systems for the past decade.