After three consecutive years of declining generation, coal-fired power plants made a slight comeback in 2013.

The increase is attributed primarily to higher natural gas prices, which made coal more economic in 2013.

That average jumped 35 percent to $3.73 in 2013, which was enough of an increase to cause some coal-fired plants to move up in the dispatch order.

The increase in coal-fired generation had a slight impact on emissions. The CO2 level in 2013 was 2 percent higher than the 2012 level, according to the EIA.

This increase of coal-fired power generation and CO2 levels won’t continue, however, because some coal-fired power plants will be retired in 2015 and 2016 as the Mercury and Air Toxics Standards (MATS) take effect.

The total amount of electricity generated by all reporting gas-fired combined-cycle power plants in 2013 is nearly 100 GWh less than the total amount reported by all generators in 2012-a drop of some 11.4 percent. The capacity of all reporting gas-fired combined-cycle power plants increased in 2013, however.

Energy Ventures Analysis, an Arlington, Virginia,-based market analysis firm that specializes in energy and the environment, compiled the data that reveals this information and more.

The firm, which has provided the data for this industry report many years, obtains the data from Form EIA 923 “Power Plant Report.” The tables in the report do a good job of telling the story, but a few observations follow.

Additional tables and comments for coal-fired power plant SO2 and NOX and gas-fired combined-cycle NOX emissions are provided in the online version of this article under the “Current Issues” heading at www.elp.com. 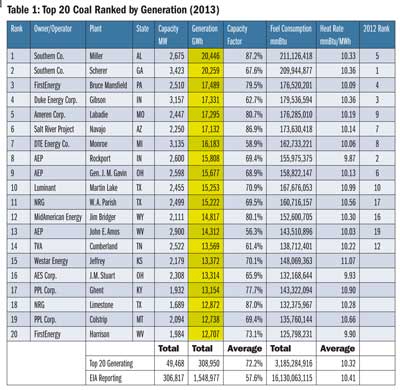 “As I say every year, to be in this list, you must be a big coal station with multiple large units,” Hewson said.

“The few plants that are under construction are small enough that they won’t break into the top 20 generation list,” Hewson said. “This list isn’t likely to change much in the next few years.”

Unlike 2012 when the top 20 generating plants produced less electricity than the year before, the top 20 in 2013 increased their production slightly and generated 1,565 GWh more electricity-a six-tenths of 1 percent increase. 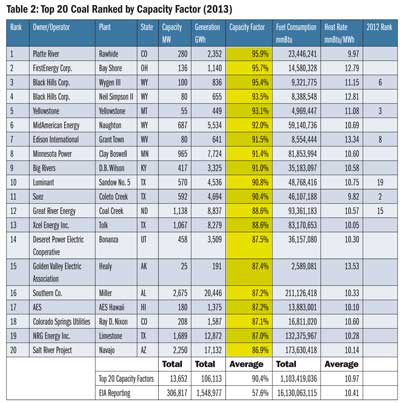 Overall, the coal-fired capacity factors for 2013 were similar to 2012 because of continued natural gas displacement. The threshold to make the list varied little-86.9 percent in 2013 vs. 87.0 percent in 2012.

The plants with high capacity factors generally fall into one of two categories, Hewson said. They are either cogeneration units with steam contracts that require high utilization or they are Western coal units with highly competitive megawatt-hour rates.

The reason for the drop-off is attributed primarily to a difference in reporting requirements and does not reflect a major change in operating performance, said Philip Graeter, an analyst at Energy Ventures Analysis.

“Small coal generators are not reporting on a monthly basis as they’ve done in the past,” Graeter said. “They, therefore, are not included in the 2013 power plant performance ratings.”

When included in the data, Graeter said, these small generators usually bump up the top capacity factor performance.

The lack of data for small generators is partially behind the big shake-up in the list. Only six plants on the 2012 list returned in 2013.

The annual generation data for the small generators should be available in January 2015. 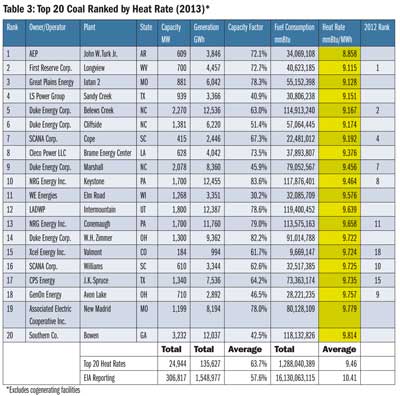 In last year’s report, Hewson predicted that AEP’s John W. Turk plant would be near the top of the list, and he was right. The Turk plant, which reached full operation in 2013, came in at No. 1, knocking First Reserve’s Longview plant out of the top spot. The Turk plant is the only ultrasupercritical U.S. plant, and, as such, achieved the best heat rate.

The qualifying coal heat rate was lower in 2013 than 2012: 9,814 mmBtu/MWh vs. 9,874 mmBtu/MWh, respectively, indicating that the most efficient U.S. coal plants became a little more efficient in 2013 largely because of the addition of another ultrasupercritical plant to the fleet.

In the past, parasitic load of pollution controls were a differentiating factor. That is no longer an issue. In today’s operating environment, post-combustion controls are needed for continued operation.

The current trend of improving heat rate might be hard to continue, Hewson said.

“In the clean power plan, the EPA is making the assumption that all coal-fired plants can improve their heat rate by 6 percent,” he said. “But it’s important, at least in my mind, to remember that when we reduce the utilization of coal plants, their efficiency will decrease. So we will likely see a reduction in heat rate performance rather than the 6 percent increase assumed by the EPA.” 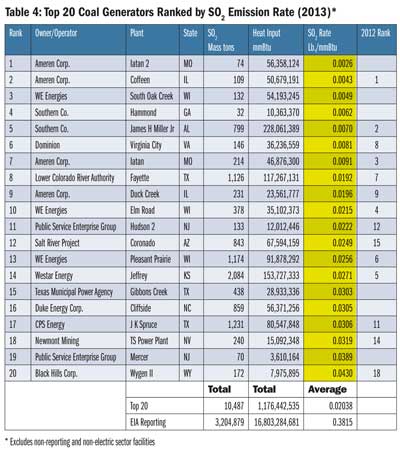 All the units in this top 20 list operate FGD scrubbers that remove more than 90 percent of coal sulfur.

Only six units dropped off the list from 2012 to 2013, but Graeter expects the turnover to increase.

“We’ll see more and more scrubbers come online in the next few years, which will add more competition,” Graeter said. “It is quite an accomplishment to reach this list.”

Units that burn lower initial sulfur content coals like Powder River Basin and Western bituminous have an advantage of reaching lower emission rates because they start with less sulfur and need to remove a lower percentage to meet a given limit, Graeter said.

The turnover in this group in combination with extremely low emission rates indicate how difficult it is to remain on list, Hewson said.

Given low SO2 allowance costs, the overcompliance benefit is very small, he said. Yet units continue to overcomply significantly with limits. 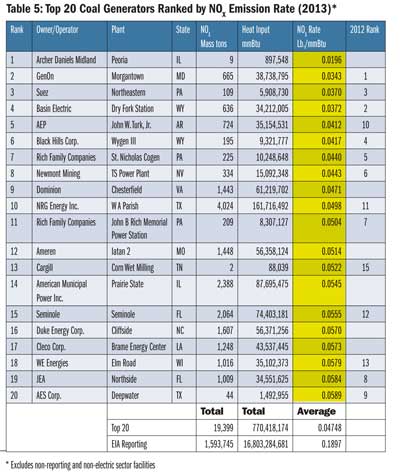 All units in this list are equipped with post-combustion NOX controls, Graeter said.

“The extremely low emission rates indicate how difficult it is to make it onto this list and remain on it,” Hewson said. “Small control upsets are enough to throw plant off the list.”

Graeter said that total emissions of all reporting plants will continue dropping as heavy emitters retire. 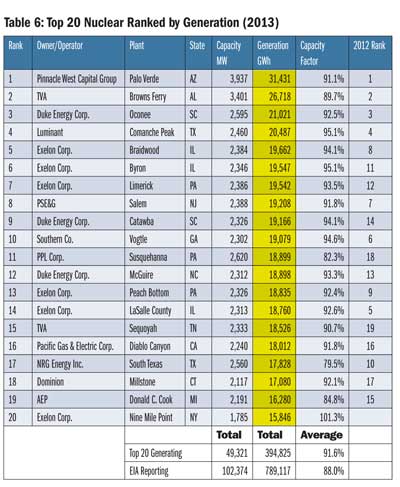 “The nuclear club is still as exclusive as ever,” Hewson said.

There isn’t much new that can be said about plants on this list. The units are heavily used because their fuel is cheap and they are at the top of the dispatch list.

Hewson expects the list to remain much the same for the next couple of years until new units come online.

The San Onofre Station in California and Kewaunee in Wisconsin retired in 2013, yet the total capacity of all reporting units increased because some nuclear units were uprated. 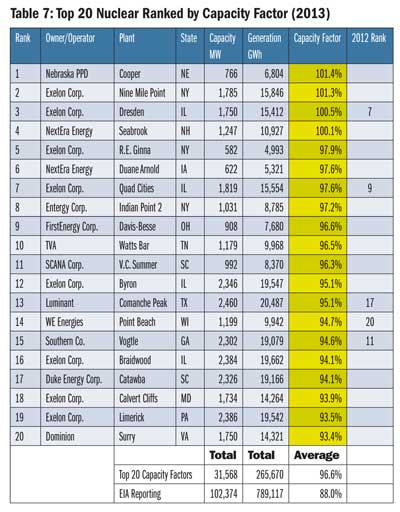 “The units on this list ran flat out and were not down for refueling,” he said. 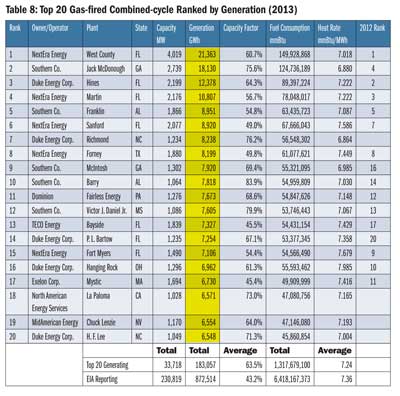 “Natural gas combined-cycle generation decreased from 2012 to 2013 due to higher natural gas prices throughout the country, which allowed coal to displace some of the units,” Graeter said.

Seventeen plants on the 2012 list returned in 2013. NextEra’s West County plant in Florida kept the No. 1 spot, and the four units that followed were also the same with a slight variation in order. 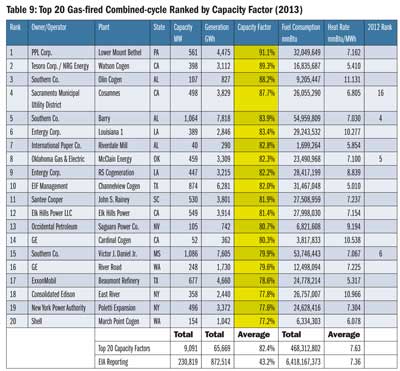 The total generating capacity of all reporting gas-fired combined-cycle power plants increased from 210,592 MW in 2012 to 230,819 MW in 2013, yet the utilization of all reporting plants decreased because of higher gas prices.

“The lower capacity factor in 2013 could be because smaller plants are not included in the 2013 data,” Graeter said. “Nevertheless, the overall story still holds true.”

Many units on the top 20 list are cogeneration units that sell steam. These units operate hard because they meet an industrial need and they have two income streams, he said. 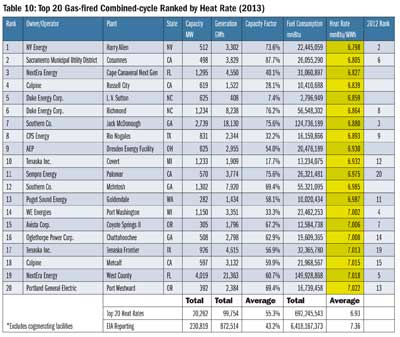 In past years, there has been much turnover from year to year in the gas-fired combined-cycle heat rate top 20 list. This year, however, 15 plants from the 2012 list returned in 2013. Three brand new plants were added to the list: NextEra’s Cape Canaveral Next Gen, Calpine’s Russell City and Duke Energy’s L V Sutton.

Several plants on the 2013 top 20 heat rate list are fairly new, and most use the same “F” class turbine technology, Graeter said.

“There is only so much more that can be done with modern technology,” he said.

These newer plants are more efficient and will be harder to knock off the list, Hewson said.

“What would draw a plant off the list is not being utilized a lot due to coal displacement,” Hewson said.

Graeter said a large change in heat rate efficiencies exists between low and full load, and baseload units increasingly will dominate the list.

Any new fossil-fired power plant, Hewson said, must have a minimum efficiency of 8.500 mm/Btu/MWh to meet New Source Review requirements.

“The average efficiency of all reporting gas-fired combined-cycle power plants already meet this requirement,” he said. “The EPA’s grand plan is that all these plants will be operating as baseload and should be even more efficient.” 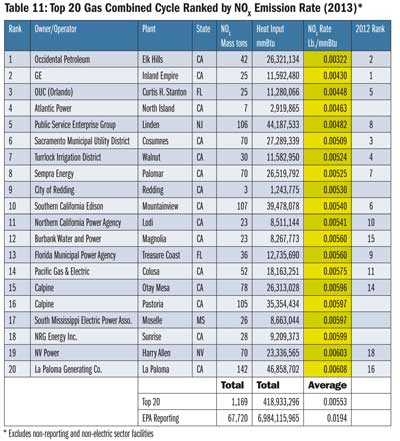 The average NOX emission rate of all reporting gas-fired combined-cycle plants in 2013 was 0.0194 lbs/mmBtu. In contrast, all reporting coal plants averaged 0.1897 lbs/mmBtu.

The average NOX emission for the top 20 gas-fired combined-cycle was only 0.00553 lbs/mmBtu, or almost one-fourth that of all reporting plants’ average.

“All the plants on the top 20 list operate with controlled combustion, and many have post-control combustion,” Hewson said. “Their emission rates are incredibly low. This is a very exclusive list.”