Editor’s note: To compare the 2014 report with previous years visit www.elp.com, select “Current Issues” and then select “Past Issues.” The articles are in the November/December issues going back to 2002.

Natural gas prices climbed in 2014, resulting in a slight increase in the utilization of the nation’s coal-fired power plants. Higher fuel prices, however, didn’t keep natural gas-fired combined-cycle plants from generating more electricity in 2014 than they did in 2013: 914,772 GWh vs. 872,514 GWh, according to a new report.

In spite of coal-fired power’s uncertain future, it remains the largest contributor to the U.S. generation mix, providing 1,573,163 GWh of electricity in 2014. Coal-fired power’s share of the generation mix likely will decline considerably when the Mercury and Air Toxic Standards (MATS) and Clean Power Plan take effect in the coming years, but for now coal still provides more electricity than any other fuel, said Tom Hewson, principal at Energy Ventures Analysis.

Since 2002, Electric Light & Power magazine has published this power plant operating performance report based on data and analysis provided by Energy Ventures Analysis, an Arlington,Virginia-based market analysis firm that specializes in energy and the environment. The firm obtains the data for this report from Form EIA 923 “Power Plant Report” and EPA’s Continuous Emissions Monitoring System (CEMS). The tables tell the story, but a few observations follow.

Additional tables for coal-fired power plant SO2 and NOX and gas-fired combined-cycle NOX emissions are provided in the online version of this article. You can find it under the “Current Issues” feature found on the magazine’s home page at www.elp.com.

Fifteen units that were in the top 20 list in 2013 remained in 2014, while only five new names were added to the list.

“The five that dropped out during 2014 barely missed the cut,” said Graeter. “They didn’t drop far.”

The total reporting U.S. coal generation fleet experienced more than 5 GW of capacity retirements, said Hewson. The amount of electricity generated by the entire fleet, however, increased more than 24,000 GWh from 2013. 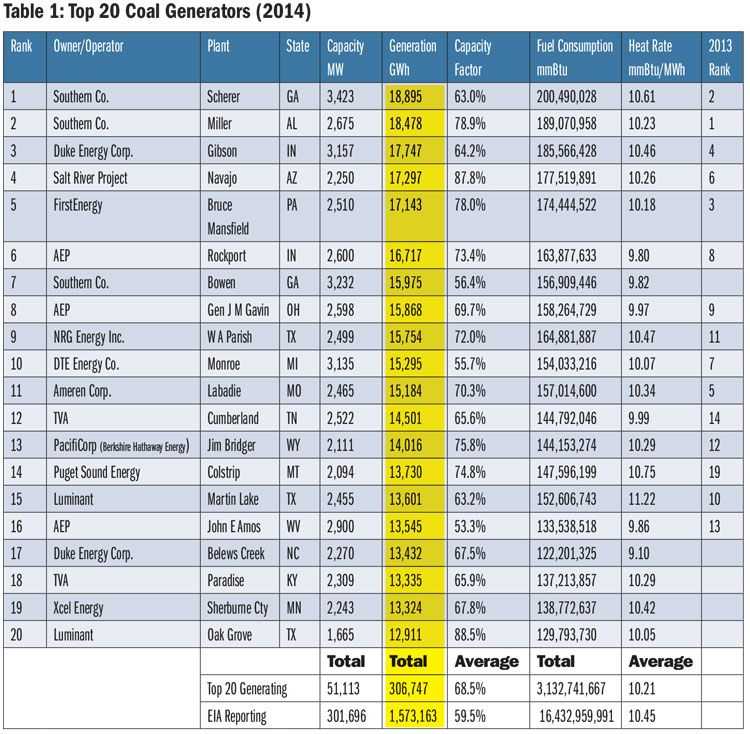 The plants in this top 20 list have the controls necessary to meet the Mercury and Air Toxic Standards (MATS), which required compliance beginning in April 2015. Some of these plants, however, likely won’t remain in this top 20 list in years to come. Hewson and Graeter expect owners to retire several plants in this list rather than spend the money to retrofit them to meet coming environmental regulation requirements, such as the Clean Power Plan.

The 2014 list of all EIA reporting coal plants includes smaller units and co-generators, which were not included in 2013 because the data wasn’t yet available.

“The return of the small generators to the group of reporting plants is responsible for this slight capacity factor increase,” said Graeter.

“The Turk plant is the only ultra-supercritical unit in the U.S.,” said Hewson. “It and Longview, which is a highly efficient supercritical plant, will stay in their top spots for a long time because we aren’t building anymore coal plants. It is likely that neither of these plants will be displaced (from this list) in my lifetime.”

In addition to Turk and Longview, 14 other plants in this top 20 list are supercritical units, with the top 12 spots being occupied by only supercritical units. Beginning with the No. 13 spot, the highly efficient subcritical Intermountain plant makes the list. Subcritical plants J.K. Spruce and Valmont also made the top 20 list. Virginia City, which came in at No. 20, is the only fluidized-bed combustion plant in the top 20.

“The main change coming to this list will be plant retirements. AEP’s Big Sandy Units 1 and 2 retired this year (2015), so we won’t see them in this list when we compile the 2015 data,” said Hewson.

It is important to note that unlike the generator and capacity factor lists, this list excludes small plants and co-generation units.

Because co-generation plants use some of their steam to run manufacturing processes and the rest for electricity generation, they tend to skew the heat rate numbers, therefore, they weren’t included in this list, said Graeter.

The qualifying coal heat rate was a little lower in 2014 than 2013: 9.765 mmBtu/MWh vs. 9.814 mmBtu/MWh, respectively. The reason, Graeter said, is because overall coal unit heat rates are less efficient as unit utilization drops.

For many years, this top 20 list has seen little change and this year is no different. Nineteen of the plants in the 2014 nuclear generation top 20 list also appeared in the 2013 top 20 list. Dominion’s North Anna plant was the only newcomer in 2014, replacing Exelon Corp.’s Nine Mile Point plant.

“The units in this list are highly utilized because of their low fuel and variable costs,” said Graeter. “They are at the top of the dispatch list.”

With several nuclear power plant retirements on the horizon, changes in the nuclear lists are coming.

“Nuclear isn’t as set as we thought it was,” said Hewson. “Low gas (price) is undercutting some plants. Single reactor merchant plants are at risk.”

The retirement of Entergy’s Vermont Yankee in 2014 and the announced retirements of its Pilgrim plant in Massachusetts scheduled by mid-2019 and its Fitzpatrick plant in New York likely to occur in 2017, are proof of some nuclear plants’ vulnerability, he said.

As some of the merchant plants leave the fleet, new nuclear plants are being added and those plants have some advantage, Hewson said.

“The EPA (U.S. Environmental Protection Agency) is allowing the new nuclear plants currently under construction to be eligible for emission reduction credits under the Clean Power Plan if the states in which they are located adopt a rate plan rather than a market-based plan (mechanism),” he said. “This is an advantage for new nuclear operating in regulated states.”

“Nuclear capacity factors showed continued high utilization rates,” Graeter said. “As always, there was a lot of turnover in this list due to refueling schedules.”

On the other hand, the entire nuclear fleet (all reporting plants) obtained an average capacity factor in 2014 that was 2 percent higher than that of 2013-90 percent vs. 88 percent-resulting in nearly 8,000 GWh more electricity generated in 2014.

“Capacity factor was down, but generation was up,” Hewson said.

This is due in part to some unit uprates, he said. Uprates are cheaper than new build.

Only three plants fell out of this top 20 list. Like the coal and nuclear top 20 generation lists, the same large units dominate this list each year. The top five plants in this list in 2014 also were the top five in 2013.

“A lot of the big combined-cycle plants are operating in regulated markets,” said Graeter. “Many were built by regulated utilities to run as baseload units, so many of the plants on this top 20 list are heavily utilized and impacted little by gas price. Therefore, you see the same plants year after year.

“On the other hand, gas prices impact merchant plant operations more than anything else, so you’ll find few merchant plants on this top 20 list,” he said. 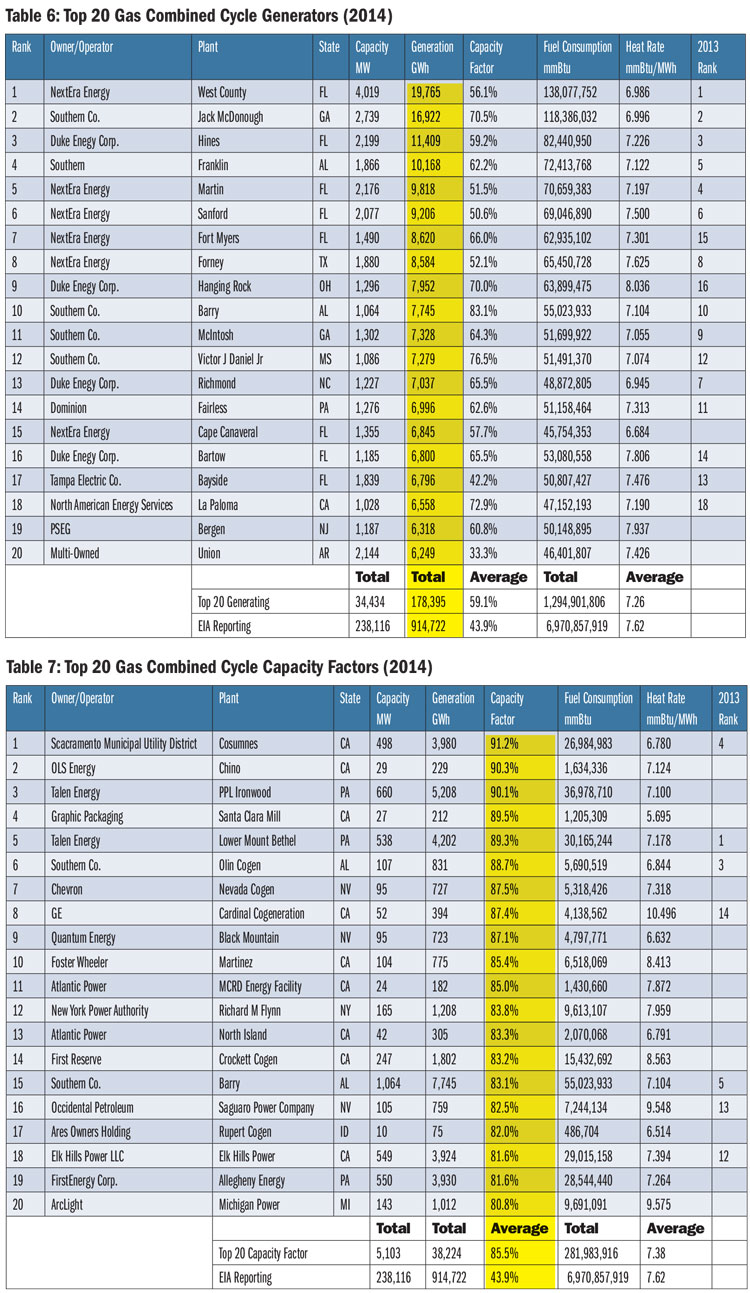 Many smaller generators that did not report in 2013 did so in 2014, resulting in fewer gigawatt-hours generated by the top 20 plants in the capacity factor list. The addition of these smaller plants also caused a lot of turnover in the list from 2013 to 2014, said Graeter. Only four plants in the 2013 list returned to the list in 2014.

As in years past, many of the units in this top 20 list are cogeneration units that sell steam and are heavily utilized because they are needed to meet industrial needs.

These top 20 plants operate extremely efficiently and each year, they seem to get a little better.

“My hat’s off to these guys,” said Hewson. “New technology allows the gas-fired combined-cycle fleet to achieve better and better heat rates.”