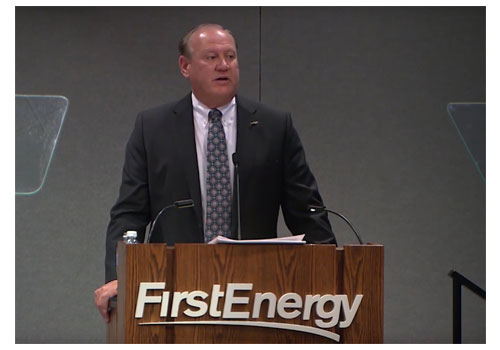 Days after his company announced its latest round of bad news for coal-fired power plants, FirstEnergy President and CEO Charles Jones acknowledged his “frustration” over the premature retirement of so much baseload power generation nationally.

“Is it frustrating that we are shutting down tens of thousands of generation” because of power market issues, Jones said in reply to an analyst question during the company’s quarterly earnings call on July 28. That’s especially true a generating asset “still has life in it,” Jones said.

One week before, the company announced plans to sell or deactivate the 136 MW Bay Shore Unit 1 in Oregon, Ohio, by October 2020. In addition, Units 1-4 of the company’s seven-unit W.H. Sammis Plant in Stratton, Ohio – collectively representing 720 MW of capacity – will be retired in May 2020.

Such announcements are becoming all-too familiar at power companies such as FirstEnergy, Jones said.

“Our country has completed the deactivation of more than 40,000 MW of coal-fired generation capacity in the last six years.” About 40 units are scheduled to close this year alone, Jones said.

“We believe that it is critical for our country to maintain baseload generation especially zero-emission nuclear power and even coal which we believe offers greater fuel security than natural gas,” Jones said.

“At this time, however, we do not see any short-term solutions” in the market situation, the CEO said. FirstEnergy cannot put shareholders at risk waiting on PJM and the nation to fix the market systems, Jones said.

“One of our goals is to keep much of our generation fleet viable” but will have to look at possible sale or deactivation of more units, Jones said.

Like American Electric Power (AEP), FirstEnergy is hoping for resolution soon on a cases involving affiliate power contracts for baseload generation now before the Public Utilities Commission of Ohio.

The CEO said he does not currently see competitive generation as a good fit for FirstEnergy, which is becoming about 80 percent regulated.

FirstEnergy has already identified significant new cost reductions for 2017 and 2018. FirstEnergy has seen a couple of its subsidiaries being put on credit watch, company officials noted.

FirstEnergy reported a second quarter 2016 GAAP loss of $1.1 billion, or $(2.56) per basic and diluted share of common stock, on revenue of $3.4 billion. The loss resulted from asset impairment and plant exit costs in the company’s competitive business.