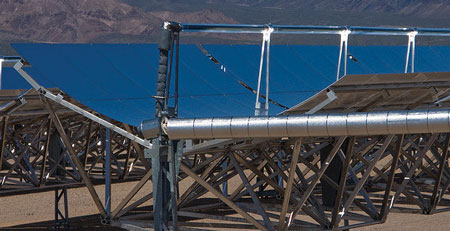 The Hybrid EGT unit, which was debuted in a ribbon cutting ceremony, is located in Norwalk, California. SCE also deployed an LM6000 Hybrid EGT at the peaker unit in Rancho Cucamonga, California.

“This unlocks a lot of value,” Vibhu Kaushik, SCE’s principal manager for asset management and generation strategy, said. “Peakers require about 10 minutes to start and come to full load” By adding the battery it changes a 10-minute delay to an immediate response.”

GE’s press release claimed the hybrid storage-gas turbine system to be the first of its kind globally. The market potential could be huge, a company leader said.

There are about 400 peaker units throughout the U.S. electric power industry and 1,000 worldwide, Stephane Cai, vice presiddent of commercial solutions at GE Grid Solutions, pointed out. The battery-turbine combinations could offer cost-competitive add-ons to existing systems or new builds in areas that are heavy in renewable generation and need flexible, resilient backups.

“We are experiencing a big industrial transformation in the utility space, such as decentralization and digitization of resources which challenge the central generation model,” Cai said. “With the increasing share of renewables, the grid needs new attributes to remain responsive.”

The footprint for the upgrades was about 8,000 square feet per site, SCE’s Kaushik said. This includes the battery and external gear such as transformers and inverters. The project was first announced in October 2016.

Five cities participating in the “Step Up and Power Down” initiative surpassed their goals for the community initiative encouraging businesses and residents to save energy. For the 18-month initiative, Pacific Gas & Electric (PG&E) partnered with San Francisco and San Jose to collaborate with businesses to inspire employees to adopt energy-saving actions in the workplace. Likewise, PG&E partnered with Redwood City, San Carlos and Woodland to help residents lower their home energy usage through simple strategies, tips and tools.

“Step Up and Power Down is one more way PG&E collaborates with our local communities in Northern and Central California to support sustainability and energy efficiency at home and work,” said Vincent Davis, senior director of energy efficiency at PG&E. “By making simple changes in their everyday behaviors, residents and employees can reduce energy waste in an impactful way to help reduce greenhouse gas emissions, meet California’s ambitious climate goals and create a healthier future for generations to come.”

The initiative was completed on December 31. In San Francisco, employees at 827 companies participated, with the downtown area achieving energy savings of 23.5 GWh. That amount of electricity could power more than 2,400 homes for one year.

“Step Up and Power Down’s significance lies in this belief in a community response. When all of our businesses are working together toward this common purpose, we can make big changes happen,” said Debbie Raphael, director of the Department of Environment (SF Environment) for the City of San Francisco.

In San Jose, employees at 448 companies participated and achieved energy savings of 27.6 GWh, equivalent to 2,800 homes for one year.

“But in addition to the results, we have much stronger relationships, and in order to create big results, we have to work together,” said Kerrie Romanow, director of environmental services for the City of San Jose.

Through local events and door-to-door campaigns, Step Up and Power Down also connected residents in Redwood City, San Carlos and Woodland to PG&E’s energy-saving programs such as Home Energy Checkup.

Completed on Oct. 31, 2016, all three cities surpassed their initiative goals. More than 2,000 households pledged to save energy at home in Redwood City, San Carlos and Woodland combined.

In April, the CONSTRUCT partners kicked off the 2017 class of 90 participants who will go through the nine-week job training program that provides training and information needed to compete for entry-level jobs in construction-related fields. The curriculum has been updated with courses focused on the growing fields of solar power and energy efficiency. The program also welcomes a new social service agency, SER Jobs for Progress. 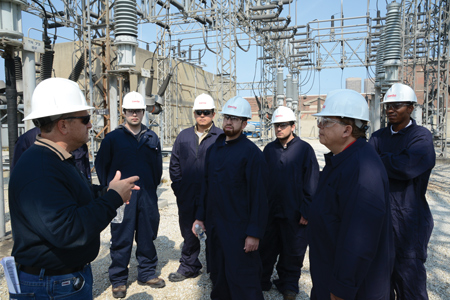 To date, more than 220 students have participated in the CONSTRUCT program. The 90 new participants this year, represent a 30 percent increase from 2016 enrollment. The success and continued growth of this program is due in great measure to the construction industry companies that are looking to hire local, diverse candidates to join their workforce.

“Our participation in CONSTRUCT allows us to work with our partners to help develop and promote a robust talent pipeline that our companies and our industries need,” said Melvin D. Williams, president of Nicor Gas. “We need to continue working together to cultivate the next generation of our energy workforce.”

The regulatory panel’s order said it did not think the merger was in the best interest of ratepayers. The TPUC doubts ranged from concern over a termination fee NextEra would receive if it was later outbid to the impact on competition in the market. 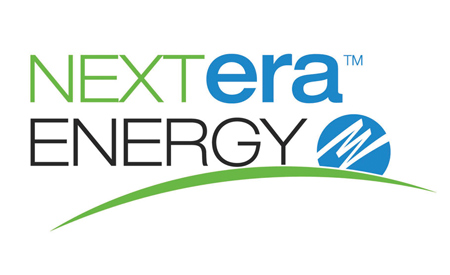 NextEra made its move for Oncor, which is caught up in parent Energy Future Holdings (EFH) massive bankruptcy, in July. NextEra announced the Oncor bid shortly after its long-delayed combination with Hawaiian Electric Co. was terminated due to lack of support from regulators in that state.

A NextEra officer had said publicly that the company has not given up on its efforts to buy Oncor and would consider all avenues. 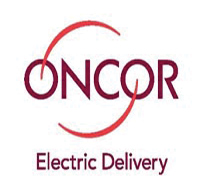 In March, all three regulators on the TPUC board said they had concerns about the sale-in particular the lack of an independent board not controlled by NextEra.

In 2015, Hunt Consolidated and partners offered to buy Oncor as part of EFH’s Chapter 11 bankruptcy proceeding in an estimated $20 billion deal. The Hunt plan had approval from a Delaware bankruptcy judge. One alleged reason it fell through, according to some news accounts, is that Texas regulators may have required the buyer to share tax savings with customers.

NextEra also had a deal to buy Hawaiian Electric Industries that was announced in 2014, but that deal fell apart in 2016 when Hawaiian regulators voted not to approve the merger.

Oncor serves about 10 million customers in northern Texas, including Dallas, Fort Worth, Odessa and Waco.

Republic of Georgia Works With SEL to Solve Harmonics Woes

Georgian State Electrosystem (GSE), the high-voltage transmission system operator for the Republic of Georgia, contracted with a U.S. company to control harmonics in the nation’s power grid.

GSE standardized on the SEL-735 Power Quality and Revenue Meter for power quality measurement. The SEL-735 is made by Pullman, Washington-based Schweitzer Engineering Laboratories. 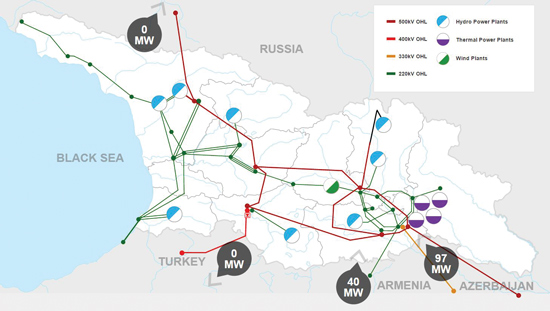 GSE faced a serious challenge in its power system. Harmonic distortion in the power grid was causing overheating and damage to GSE’s critical power transmission infrastructure and was negatively impacting power quality. Left unchecked, the harmonic distortion could have led to sudden equipment failure, threatening the stability of the power grid.

To solve the harmonics problem, GSE first identified the sources of higher-order harmonics on its 220 kV and 500 kV transmission systems and documented them for government regulators.

After researching possible solutions to pinpoint the problem source(s), GSE chose the SEL-735 based on its advanced harmonics functionality.

GSE determined that two harmonic sources were causing its autotransformers and shunt reactors to overheat. One source was the ac-to-dc converters used in the HVDC station for interties with neighboring Turkey. The second harmonics source originated from several industrial plants.

GSE used low-pass filters to remove harmonics introduced by the ac-to-dc converters, but enough got through to cause problems. With the documentation that the SEL 735 provided, GSE contacted the industrial plants and requested that they take steps to minimize harmonics.

Laserpas, an international remotely piloted airborne system (RPAS) operator, completed its first project in Romania recently. The company’s unmanned system was used to survey 308 kilometers (km), or 191 miles, of power lines. The project team discovered 50 km of undocumented lines and other inaccuracies in data, as well as various security threats.

Working for the Romanian branch of a major Central and Eastern European energy company, Laserpas made almost 200,000 photographs via a remotely piloted helicopter. After analyzing the data, it turned out that the client had 358 km of lines instead of the previously cited number of 308 km. The company also discovered that 14 km of infrastructure lacked wiring. 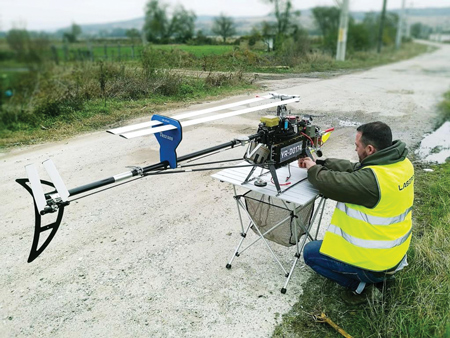 The survey revealed that 5,214 power line poles are situated almost a kilometer away from their documented coordinates. The software automatically identified 608 cases of hazardous trees that might cut the power lines if they fell, as well as more than 100,000 square meters of plant life that is needed to be cleared.

In addition, 58 buildings and constructions that are dangerously close to the power lines were found-the data provided by Laserpas will help the client in determining the buildings’ legality.

The company doesn’t develop the RPAS it uses, but it does develop its own sensor and hardware packages used with it. It uses LIDAR and optical scanners, with GPS and inertial navigation to ensure accuracy of the resulting “point cloud”, explained Mantas Vaskela, CEO of Laserpas.

“We also work with aerial photography to make orthophotos. However, LIDAR gives us much more accurate pictures, as well as allows producing 3D models,” he said.

The company has conducted flights in Lithuania, Latvia and Bulgaria, with Romania being its last project. Laserpas is a member of Avia Solutions Group family, an international, publicly traded aviation holding company with more than 20 subsidiaries worldwide.