A pair of goldfish found swimming inside a pitcher in a secure area of Ohio’s Perry Nuclear Generating Station on the shores of Lake Erie is causing a mystery and an embarrassment for plant operators.

Plant operators are scrutinizing security footage and personnel logbooks to find out who could have left this odd find in an underground steam tunnel that channels heated steam from a reactor building at the plant. Workers removing scaffolding inside the tunnel discovered the fish. 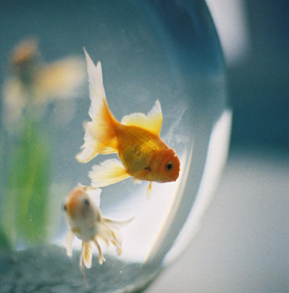 FirstEnergy Corp. officials have said an employee or contractor must have smuggled them into the nuclear power plant.

The pitcher and the fish inside never presented a public safety risk, according to officials. The area is off limits except for scheduled maintenance due to the possibility of radiation exposure. The reactor has been shut down since March 2013 for maintenance.

The fish were of the 2-inch-long type given away as carnival prizes. The pitcher was a juice or lemonade pitcher. Based on the amount of fish waste in the bottom of the pitcher, neither the fish nor the pitcher had been there very long.

According to tests, the water the goldfish were swimming in was reactor water with slightly detectable levels of radiation. The goldfish later died from lack of care, according to FirstEnergy.