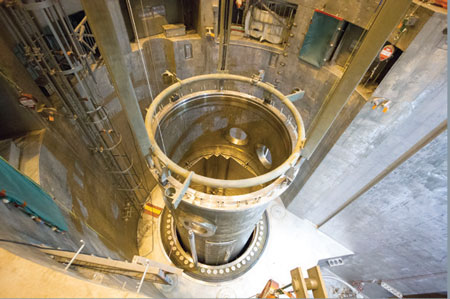 Tennessee Valley Authority’s President and CEO Bill Johnson chatted with ELP to talk about all things nuclear energy recently. Johnson and TVA were fresh off celebrating the Nuclear Regulatory Commission’s decision to grant an operating license for the Watts Bar 2 unit in Spring City, Tenn. Watts Bar planning originated in 1970s but construction on Unit II was stopped in 1988 due to cost concerns and restarted in 2007. TVA ultimately has spent about $4.5 billion on it. Watts Bar 2 is scheduled to be operational by early 2016.

Below is the Q&A with Johnson, edited for space limitations:

1) Congratulations on the Nuclear Regulatory Commission granting a 40-year license for the newly completed Watts Bar 2 unit. This was a long-running saga. Did you wonder if this day would ever come?

“You know I never doubted in the long run that we would get it done, but there were days I wondered if we would ever get over the hump. One thing that’s nice is that a lot of good people worked hard on this…it’s great to see good work rewarded.

“This project got a lot of oversight from me, from the board, from outside with consultants. We always had a good sense of where we were and what it would take to get it done. The licensing process is arduous but the steps and requirements are clear…”

2) Why did TVA restart Watts Bar 2 construction so many years after stopping the project in its tracks?

“A couple of things happened…There was a growth in demand and need for power. There was a recognition that environmental standards were getting tougher and nuclear was a very good environment asset.

“Another thing was that TVA restarted Brown’s Ferry (Unit 1, in Alabama, after a 1975 fire that shut it down until 2007). The fact that we could bring back a nuclear plant that had been inactive” encouraged the decision to finish Watts Bar 2. “The combination of those factors and the need for cleaner, low-cost power helped make the decision for Unit 2”

3) What was the biggest roadblock in getting it done this time around?

“We had stops and starts in terms of how much was it actually going to cost and how much work was it going to take to get it done. Once we figured it was going to cost more ($4.5 billion) we had to figure whether it was worth it.

“The biggest obstacles were understanding where we are in the construction process . How does that match up against current regulatory standards.”

4) Explain to an outsider why nuclear is a cost-effective and safe option for long-term electricity generation?

“With a plant like this we will get 60 years of operation out of it and maybe 80. These are very long lived assets. And once they’re built, the fuel costs are very inexpensive. There’s a high capital cost, but if you get 60 or 80 years out of it, that’s less of a concern. And uranium in the fuel cycle is not volatile (price wise) so you get 60 years of very predictable costs out of the units.

“Twenty percent of this country’s power generation comes out of nuclear; that’s baseload generation, the kind that goes 24/7.”

5) Obviously you know about Entergy’s decision to close two of its longtime nuclear plants, Pilgrim and James A. FitzPatrick. Did those announcements cause you any second-guessing about Watts Bar 2?

“Every day since I got here, nearly three years ago, I’ve been asking myself that question: Are we doing the right thing? In this region of the country this is absolutely the right thing.

“Those (Pilgrim and FitzPatrick, in Massachusetts and New York, respectively) are smaller units, single site units…They are also in deregulated markets, so they have to compete.”

6) Are those reasons behind those closings due to isolated issues or represent serious threats to future nuclear plant expansion nationwide?

“Those are important assets; it’s a shame to see plants retire because of market design. Closing one of these is not like putting a coal or gas plant in shutdown. Close one of those and you’re not bringing them back.

“I don’t think (that the problems facing Pilgrim and FitzPatrick also represent long-term threats to the industry). Today we have low natural gas prices, and we have very flat growth in demand, so there’s not really a need for a lot of new plants.

“In the short term, natural gas is very inexpensive. If you take the long-term view, we cannot meet the goals of the Clean Power Plan unless we keep the nuclear fleet we have and expand it… In the long term, the desire for cleaner air and a cleaner environment is going to have to lead us to nuclear power.”

7) Having said that, does the Clean Power Plan’s final rule give any significant encouragement to nuclear compared to other fuel sources such as natural gas, solar and wind?

“I wouldn’t say it says anything specifically helpful for new plants. ..Some plants (like Watts Bar) will count against reductions once they’re completed…I do think just the targets themselves (such as a 32 percent reduction in 2005 levels of CO2 by power plants by 2030) is the recognition by the environmental groups, EPA and the (Obama) Administration that the nuclear fleet is going to be the key to achieving this.”