Natural gas-fired power generation has been growing since the early 1990s. Gas turbine power plants are relatively cheap and quick to build and they emit less carbon dioxide (CO2) per unit of electricity generated than coal-fired plants. Combined cycle power plants built around high-efficiency gas turbines are one of the most efficient types of fossil fuel power plants available today and, provided gas is cheap, they offer competitively priced electricity.

Yet gas turbines are sophisticated, high-technology engines, and are manufactured successfully by only a few companies. One consequence of this has been that, while they have become popular in the developed world, their use in the developing world is less common. 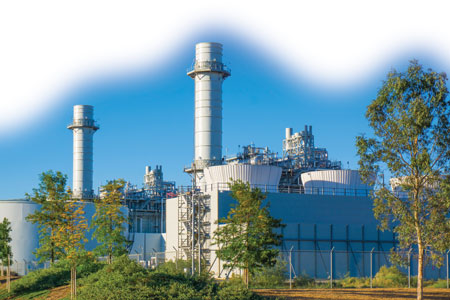 Europe and, the United States in particular, represent major markets for gas turbine manufacturers. According to the U.S. Energy Information Administration (EIA) the amount of electricity generated in the U.S. from natural gas doubled between 2000 and 2012. Other regions, particularly Eastern Europe and Asia, also are adopting the technology and growth there is expected to be significant over the next 10 years, through 2025. The amount of electrical power produced globally from natural gas-fired power plants rose from 3,420 terawatt-hours (TWh) in 2004 to 5,100 TWh in 2012, according to the International Energy Agency’s (IEA’s) Key World Energy Statistics for 2014. This equates to 22.5 percent of global electrical power being produced with natural gas in 2012.

U.S.-based shale gas companies’ success has caused significant growth in U.S. gas-fired generation. Increased availability of natural gas has pushed its price down, making it the fuel of choice for new generation in the U.S. In other areas of the world, where there is no shale revolution, the cost of natural gas remains much higher.

Because price is the Achilles’ heel of gas, it also is gas-fired generation’s greatest risk. Historically, natural gas prices have been extremely volatile. When prices are low, electricity generated from combined cycle power plants is competitive. Once prices start to rise, however, these plants quickly lose their competitiveness and, in some cases, operators are forced to shut down their gas-fired plants altogether.

Reuters Africa reported on Jan. 17, 2014, that a study performed by the Stranded Assets Program at the Smith School of Enterprise and the Environment at the University of Oxford discovered that in the 18 months prior to Jan. 1, 2014, 10 European utilities mothballed combined cycle plants. These plants represented a total capacity of 21.4 GW. The utilities that shuttered gas plants included E.ON, RWE, Statkraft, GDF Suez and Centrica.

The IEA suggested in a report in 2011 that a golden age of gas is dawning. The recent drastic drop in oil’s price and the effect of that price drop on economics of shale gas pumping, however, highlight that the fuel price risk associated with natural gas combustion for power generation is not a historical artifact. High prices could return.

The success of gas turbine power plants in recent years is notable but should be viewed against a changing background within the power generation industry. The push to reduce CO2 emissions is promoting a massive growth in renewable generation across the globe, particularly in Europe and the U.S. where large fleets of combined cycle plants exist.

Most new renewable capacity comes from wind turbines and solar cells-both intermittent electricity sources. The preferential use of these facilities to provide power across a grid means that other generating plants must increasingly be called upon to backup or stabilize the grid. This is particularly true of gas turbine stations.

The goal of gas turbine development since the late 1990s has been to increase energy conversion efficiency. This has culminated in combined cycle plants with demonstrated efficiencies of more than 60 percent with the record being just below 61 percent.

Higher efficiency has been achieved primarily by increasing the operating temperature at the gas turbine inlet to provide an improved Carnot cycle heat engine efficiency. The highest temperature today is around 2,912 F (1,600 C), but a Japanese program is aiming for 3,092 F (1,700 C), which could allow a combined cycle efficiency of 65 percent. To withstand such temperatures, single crystal alloys with special thermal barrier coatings and internal blade cooling are required. This is where research efforts have been focused.

High efficiency is not always compatible with the flexibility required of a combined cycle plant when it must provide grid support for renewable generation integration. Such support involves more frequent start-ups and shut-downs than when operating in base or conventional intermediate load duty cycle. In addition, the plant often is required to operate at part load and must be able to ramp up and down frequently and rapidly. These situations usually will decrease a plant’s efficiency and increase its emissions. In addition, it exposes plant components to greater thermal and mechanical stress.

Plant designers have begun to address these issues by exploring changes to both turbine design and the way plants operate. One strategy is to “park” a plant overnight on very low load. This strategy speeds start-up the following day and reduces thermal stresses because the plant maintains temperature overnight. Plants optimized for high efficiency might not operate well at part load. Sacrificing ultimate efficiency could provide a payback in terms of efficiency at lower loads. Emission performance might also be improved across a wide range of loads.

Another strategy is to decouple the gas turbine and steam turbine. The gas turbine in a combined cycle plant can usually reach full power more rapidly than the steam cycle, so this strategy can make the plant more flexible.

The need for more flexible operation has prompted several manufacturers to offer two product lines, one designed for high efficiency and one for improved flexibility. The outlook for future grids suggests that the latter is likely to become the most important as renewable penetration continues to grow.

Three options exist for controlling gas plant emissions. The most probable, particularly for combined cycle power plants, is post-combustion capture using a spray absorption tower similar to a flue gas desulphurization wet scrubber in concept. This technology has an advantage because it can be easily retrofitted into existing plants.

Another possible option is oxyfuel combustion under which natural gas is burned in air instead of oxygen. An oxygen separation plant is required to operate this type of plant and the combustion cycle must be modified to reduce combustion temperatures, which are much higher in oxygen than in air.

The third option is to convert natural gas into hydrogen using a reforming process similar to that used in a fuel cell operating on natural gas.

Carbon capture might not be required on combined cycle plants before 2020, but it could become mandatory between 2020 and 2030 if international ambitions to slow climate change continue.

In spite of the challenges, natural gas as a fuel for power generation is expected to continue to grow over the next 25 years. Natural gas is one of the cheapest sources of electricity, particularly in the U.S., and it could remain competitive even when carbon capture and storage is added. Its competitiveness is being eroded by renewable energy generation, however, particularly by onshore wind and solar photovoltaic. Natural gas price, therefore, will determine how competitive gas-fired generation will compete.

According to the IEA, electricity generation from natural gas, which it reports accounted for 5,104 TWh in 2012, is expected to rise to 6,056 TWh by 2020 and to 9,499 TWh by 2040. This is an 86 percent rise from 2012 to 2040, meaning gas will account for 24 percent of global electricity generation. When this number is translated into additional capacity, it equates to 1,621 GW of new gas-fired generating capacity between 2014 and 2040. This represents a large investment that will galvanize the industry well in to the heart of the 21st century.

Editor’s note: Paul Breeze’s full report titled “The Future of Gas Fired Power Generation: Adapting Gas Technology to the Renewable Generation Landscape” was published in June 2015. It is available for purchase from PennEnergy Research. PennEnergy Research was established in 2004 and provides energy industry leading data, surveys, statistical tables, reports and training. PennEnergy Research offers new and improved research options for energy professionals, and is the premiere industry source for actionable data and information, including custom research and consulting. PennEnergy offers more than 6,000 products and creates custom research. Owned by PennWell Corp., PennEnergy has a solution for you.

Dr Paul Breeze has specialized in the electricity sector for the past 28 years. He is a contributing editor for the monthly international magazine for the power industry, Modern Power Systems. As a freelance writer he has contributed to The Financial Times, The Guardian, The Daily Telegraph, The Observer and The Economist. In addition to the power sector, Paul Breeze’s interests include science and the computer industry.