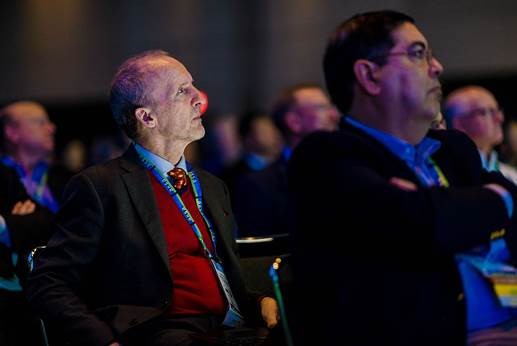 (Robert Yeager, president of Power and Water Solutions at Emerson, makes a key point on the big screen during Tuesday’s keynote).

ORLANDO-The pace of change picked up considerably during Tuesday’s keynote on the first day of POWER-GEN International.

First, it was an hour shorter than the event’s traditional keynote, part of a new plan for spreading those out over two days at the Orange County Conventional Center. Speakers Gregory Lee, Robert Yeager and Greg Scheu spoke briskly and pointedly Tuesday on separate visions that yet carried common, futuristic themes.

Digital transformation. The evolving grid. Workforce challenges. The quickening pace of it all.

“The pace we see today is probably the slowest pace we’ll see for the rest of our careers,” said Scheu, who is president for ABB Americas.

Scheu focused on how power generators can thrive in a new energy market. Coal, nuclear and gas are all still playing a pivotal role, but renewables are increasingly coming on line and distributed grid-edge technologies are improving to balance all of it.

For plant operators seeing far out into the future are already aware that change is what’s expected. Incoming employees won’t be nearly as wary as long-timers. But even that veteran wariness is morphing into enthusiasm. 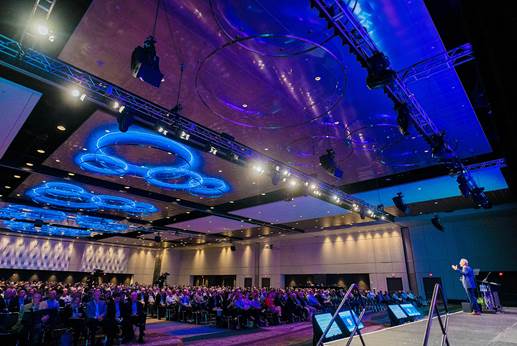 “Seventy-five percent of the workforce will be millennials by 2025,” Scheu said. “Five to six years ago I would say a lot of executives were hoping they could retire before (the digital revolution) happens. Today you see leaders running toward it.”

And why not? Yeager, president of Power and Water Solutions at Emerson, pointed out that digital transformation brings tremendous opportunities for the power sector in terms of improved plant efficiencies.

First, though, he challenged the fashionable notion of digital twinning. Power generators can convey that to mean a software facsimile of their plant operations, but it’s far more active and immediate than once described.

“To me when people talk about a digital twin they talk about a photo,” Yeager said, something that is already out of date, out of synch. “The twin is not alive.”

Instead, what is needed is something digital that has the same DNA as the plant, that utilizes collaboration and expertise both inside and outside the company. Something that might require 10 million lines of code, yet is developed over time to incorporate cloud computing, interconnectivity, machine learning and artificial intelligence. Something that automatically updates when the real plant situation changes.

The good news, Yeager pointed out, is that the industry is already working toward those goals and has been, whether it knew so or not, for decades. The internet, wireless communications, neural network expansion and advanced pattern recognition all were developing and eventually synchronizing.

“You fix it before you broke it,” he said. “That’s the digital future. That’s about the future of collaboration.” 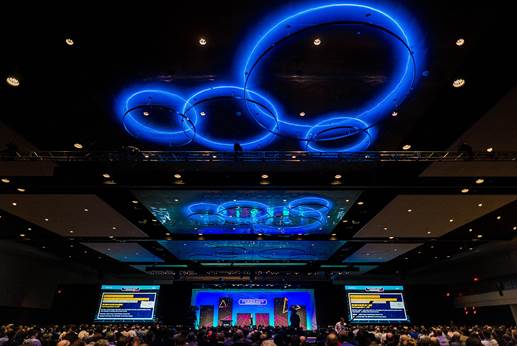 Orlando Utilities Commission is POWER-GEN’s host utility, and its board President Gregory Lee kicked off the keynote welcoming the audience of thousands to Orlando. He detailed OUC’s commitment to fuel diversity, noting by example the Stanton Energy Center incorporating solar, natural gas, landfill gas and coal.

“The POWER-GEN theme of “Ëœwhere conventional meets renewable’ is spot on,” Lee said.

POWER-GEN International runs through Thursday. It has more than 15,000 attendees, 800 exhibitors and 70 content sessions on every phase of the generation sector, from gas-fired turbine technologies to plant performance, renewables, microgrids, financing and emissions, among others.

Four Knowledge Hubs are offering shorter sessions on the exhibit floor, with themes on decarbonization, energy storage, the future of baseload and emerging technologies.

See POWER-GEN.com for more details on the schedule.