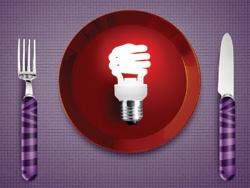 A new era of energy frugality is taking hold in the United States even as the economy slowly recovers, according to a survey from the Deloitte Center for Energy Solutions.

Businesses are forging the way by targeting average reductions in energy consumption of nearly 25 percent over a three- to four-year period. Consumers also are doubling down on efficiency: 83 percent report that they took extra steps to reduce their electric bills during the past year, and 93 percent say they will use the same amount of electricity or less in the future.

“The recession is profoundly changing energy habits for both businesses and consumers,” said Greg Aliff, one of the survey’s authors and a vice chairman in the energy and resources sector at Deloitte LLP. “Using less may be the new normal, from boardroom tables to the kitchen tables.”

The annual survey, “reSources 2012,” found that 9 out of 10 companies have set goals regarding electricity usage and energy management practices, with 66 percent identifying cost cutting as their primary motivation.

New energy goals are not just corporate window dressing; they are linked to the bottom line. Companies are making significant energy efficiency progress, reporting that they have achieved about 60 percent of their targets for energy savings when it comes to electricity, natural gas, carbon footprint and transport fleets. It is going to get tougher, though.

More than half—62 percent—of companies report that their energy management goals were somewhat difficult to achieve. Moreover, 21 percent say their energy management goals were very or extremely difficult to achieve compared with 13 percent in the 2011 survey. The low-hanging fruit might already have been picked when it comes to energy efficiency.

Consumers Continue to Seek Smarter Ways to Reduce Energy Use

Nearly two-thirds—61 percent—of consumers believe going through the recession has been good because it makes them more efficient and reminds them what is important. In contrast, last year only 49 percent of respondents felt that way.

Consumers are getting smarter about energy conservation. According to the survey:

à¢—  Consumers see turning off the lights (cited by 56 percent of respondents), shutting down electronics when they are not in use (48 percent) and adjusting thermostats by a few degrees (41 percent) as among the top five most important actions they could personally see themselves doing to save even more electricity in the future.

à¢—  More than one-third (35 percent) said replacing old appliances with new, more energy-efficient ones as among the top five actions they could take.

à¢—  One-fifth (20 percent) cited using a smart power strip that senses when appliances are off and cuts phantom energy use.

à¢—  And 12 percent cited getting a smart energy management application to control and reduce their energy consumption.

He suggested that such technologies help energy users make a radical difference in their own consumption.

“The power of one has come into its own,” he said.

Stanislaw cited a new white paper he wrote, “Next Frontiers: How Technology is Radically Reshaping Supply, Demand & the Energy of Geopolitics.”

Deloitte’s “reSources 2012″ survey was completed by Deloitte and The Harrison Group, a strategy and market research firm, which polled more than 600 business decision-makers and more than 2,200 household decision-makers.

Marlene Motyka is Deloitte’s U.S. alternative energy leader. She is a principal of Deloitte Financial Advisory Services LLP and has served as its national leader for the U.S. power and utilities sector. As Deloitte’s sustainability and climate change leader for the energy and resources industry, she has advised clients on the impact of carbon regulation on valuations and financial reporting and has led a team that completed Deloitte’s greenhouse gas inventory baseline calculation and subsequent analysis.