A major challenge for the geothermal energy industry is reducing the risk of its exploration and drilling phase — there is a 40-60 percent chance that each $5-7 million well is ultimately deemed unproductive. But that statistic may soon change.

In what many in the industry are calling a game-changer, the nation’s first enhanced geothermal system (EGS) to supply electricity to the grid came online last week. Ormat‘s Desert Peak 2 project is producing an additional 1.2 MW of power to its existing nearby power plant.

Ormat started the project back in 2002 and has spent the past decade researching with U.S. Department of Energy (DOE) how to make an in-field EGS project work. When hot rocks below the surface cannot be permeated with conventional geothermal technology, EGS technology is used to pump highly pressurized fluid into existing fractures of the hot rock in order to create a flowing reservoir. 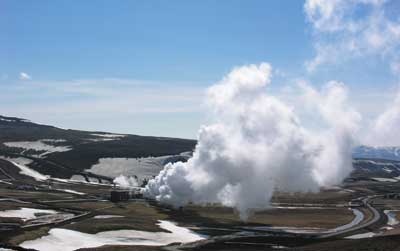 At Desert Peak, Ormat had previously drilled a well that only allowed an injection rate of about four gallons per minute, which was then deemed unproductive and abandoned.

After performing years of research that included creating seismicity protocol, the EGS procedure was a success, and the well now has an injection rate of up to 1,600 gallons per minute — it was essentially connected to the existing reservoir at the site.

“The really exciting part is that this technology is, in short, a game-changer,” said Paul Thomsen, director of policy and business development at Ormat. “Folks in the industry can now go back to existing wells that were unproductive if they had permeability problems, implement this technology at a relatively low cost, and potentially breathe life into unproductive wells — this can essentially increase the longevity of an existing project or increase power output.”

Acknowledging that this project is a huge leap for geothermal technology, Karl Gawell, executive director of the Geothermal Energy Association (GEA), reminded industry advocates that the technology has a long way to go at a recent press conference. “I don’t want to overstate where EGS is — there have been some successes and a green light is on the program right now to move forward,” he said, “but we’re decades away from the MIT ideal of EGS projects.”

Thomsen said that Ormat took a “conservative” approach to using EGS technology. Instead of trying to create a new geothermal reservoir in an area with unknown potential, it started by proving the technological aspects of EGS in-field at an existing facility. Thomsen is confident that the technology can be used to further develop standalone EGS systems.

Doug Hollett, program manager of the U.S. DOE Geothermal Technologies Program, reiterated the importance of this project during a telephone conference. He explained that Desert Peak 2, and other EGS projects in the works, are establishing a pathway to low-risk and low-cost EGS. “Rather than EGS being a large number that sits out there in the future, we’ve got a pathway were developing that allows us to perform EGS in-field, which allows us to get to larger targets,” said Hollett.

“This is a shining moment for the geothermal technologies program. We don’t see any barriers to implementing this technology to date,” said Thomsen. “There are no existing unknowns — we’re going into wells and breathing new life into them.”

This article was originally published by RenewableEnergyWorld.com. It was republished with permission.