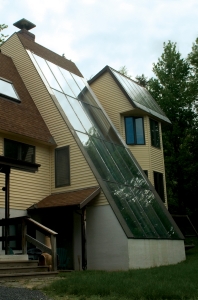 The study built a market-adoption scenario for the solar characterization and resulting value assessment. In this scenario, the market dictates value by individual customer decisions to deploy any of the three solar DG technologies. Many customer decisions are motivated by cost savings that include net metering, state rebates and utility incentives, as well as environmental concerns.

Solar DG adoption or penetration in the market is driven primarily by the payback period. Several penetration cases were modeled as shown in Figure 1.

In contrast to allowing the market to drive value, the study also examined how APS might target discrete locations to deploy or encourage solar DG placement. This target scenario assumed that APS strategically could deploy solar DG.

In addition, a sensitivity case was developed to the high-penetration case, which assumed all commercial PV deployments would use single-axis tracking PV technology in lieu of flat-plate PV technology. This sensitivity was intended to reflect the theoretical upside or maximum value solar DG could deliver. The study was developed to analyze value for each scenario, which included three discrete target years: 2010, 2015 and 2025.

Using the adoption cases and characterizing the solar DG production, the study developed the capacity impacts on APS distribution, transmission and generation systems. For the distribution system, the market-adoption scenarios created no real value because the need to meet peak customer load in specific, congested areas when solar DG is unavailable eliminates most potential benefits.

Distribution system value, however, may be derived when sufficient solar DG is deployed on a particular feeder. Such deployment potentially can defer distribution upgrade investments, but these solar installations must be located on a specific feeder to reduce a specific, overloaded condition. Capital cost reductions in the transmission and generation systems do not require specifically locating the DG but will demand a large penetration of DG that may not be available until 2025.

The total energy value outcomes were the result of many complex factors that weigh on how value is derived from solar DG, including reduction in fuel costs, purchased power and fixed operating and maintenance (O&M) costs, as well as reduction in line-related energy losses. Most solar DG savings are realized in energy terms (See Figure 2).

Significant in the study, peak solar production was not coincident with the APS customer demand curve, which peaks late in the day while the sun sets (See Figure 3). Thus, the capacity savings are limited by the time of day of APS’s system peak demand. Solar hot water stores thermal energy into the peak-demand period.

Even with solar hot water, additional solar production resulted in diminishing capacity value returns. At some point the additional solar production pushed the APS peak later into the day without significant reduction. This might seem counterintuitive, especially from the customer cost perspective where residential and commercial customers (without demand changes) see their bills’ energy portions reduced as a direct offset for energy and demand reduction in delivered energy from APS.

The greatest value of distributed solar generation to APS is in reduced purchased power, losses and fuel costs. Marginal demand reduction also is achieved by targeting DG’s size and location.

Author
Joni Batson is a vice president with R. W. Beck, an SAIC company. She has more than 30 years of experience managing transmission and distribution planning and analysis projects for electric utilities, including generation interconnection studies. Reach her at jbatson@rwbeck.com.