The CEO of the Year in the large utility division is Gale E. Klappa, chairman, president and CEO of Wisconsin Energy Corp. The shareholder-owned electric company provides electric service to 1.1 million customers in Wisconsin and the Upper Peninsula of Michigan. Total assets are about $13 billion.

The CEO of the Year in the small utility division is Robert “Bob” A. Heinz, general manager of Dawson Public Power District in Lexington, Neb. One of the largest rural electric utilities in the only fully public power state, Dawson has some 23,000 customers in a 5,000-square-mile service territory—about four customers per mile. The territory includes 5,600 miles of distribution and subtransmission lines and 52 substations.

Klappa and Heinz bring academic histories rooted not in electrical engineering or business, but in something equal parts art, science and knack: communications and public relations. As good storytellers go, they’re two of the best. We got to know them both. These are their stories.

“There’s a bit of a story behind how I came into the industry,” Klappa said. “I had worked my way through college as a radio newscaster.”

In a smooth, low voice peppered with perfect enunciation, Klappa outlined his journey from a 1972 graduate of the University of Wisconsin-Milwaukee armed with a mass communications degree. He had been working in Atlanta as the news director of a chain of news stations when he flipped through a Sunday issue of The Atlanta Constitution. A want ad teased that a Fortune 500 company was seeking a spokesman, he said.

“Having been involved in news ” I thought it would be interesting,” Klappa said. “I was hired as the Southern Co. spokesman in 1974 and was with Southern Co. all the way through 2003 when I came to Wisconsin Energy.”

During his 29 years with Southern Co., Klappa immersed himself in seemingly unrelated parts of the company. He had 14 job titles, including senior vice president of marketing for Georgia Power. One position took him all the way to England for more than three years. That time he was president and CEO of South Western Electricity Board (SWEB), a U.K. distribution utility which was formerly owned by Southern Co.

A business card from Klappa, depending on how long someone has known him, might list one of those positions, or it could say chief strategic officer, North American group president of Southern Energy Inc.—now Mirant—or executive vice president, chief financial officer and treasurer, among other titles.

In April 2003, Klappa ordered new business cards again. This time they said president of Wisconsin Energy Corp. He was elected to the board of directors nine months later, and since May 2004, Klappa has served as 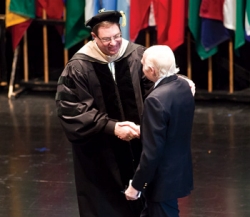 Under his direction, the Milwaukee-based company has increased its dividend 160 percent through eight consecutive years of dividend boosts. It was enough for “Mad Money” host Jim Cramer to invite Klappa on the CNBC show in July.

“This is exactly the kind of stock that works in the environment of political chaos and economic uncertainty,” Cramer said.

Klappa—in that smooth, low voice—explained on the show his board-approved goal of moving the utility’s payout ratio to 60 percent of earnings during the next three years. Cramer said the dividend is one of several reasons WEC stock is “a buy.”

Klappa said focus keeps the company successful, and he’s made some tough choices.

“We cannot afford to have budget increases,” he said. “What is essential is satisfying customers.

When Klappa joined the company, a team already had developed a lengthy infrastructure-building plan called Power the Future to combat brownouts and blackouts. It called for four major new generating units. Its execution wrapped up in January at a cost of $7.8 billion since 2003.

As a result, Wisconsin Energy has built more than 2,400 MW of efficient generation. It has 50 percent more generating capacity than it did 10 years ago, and it cut emissions of sulfur dioxide, nitrogen oxide and mercury by 70 percent.

He attributes the achievement to three actions:

“I think five years from now, it will be clearly demonstrated that we are ahead of the curve,” Klappa said. “We were able to lock in prices for commodities, steel, concrete, copper that you simply don’t see today.”

The build at Port Washington Generating Station cost $609 per unit of capacity; if Wisconsin Energy were to build it today, it would cost $1,000, Klappa said.

Like Klappa, Heinz has some stories. He served in the military, then he filled executive roles with a North Dakota convention and visitors bureau and a chamber of commerce.

“I actually started my career in the electric industry by getting a job with the local rural electric cooperative, which served my parents’ farm in North Dakota,” Heinz said. “I did the marketing, public relations and economic development.”

While he was there, Heinz learned the business side. He also became involved in the technical aspects of running an electric company, and his focus began to change. He developed the skills to become a general manager, he said.

Heinz landed a general manager position at a South Dakota cooperative. In 1997, he became general 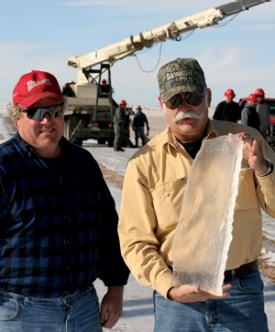 manager of Nebraska’s Dawson Public Power District. He said that two qualities helped him achieve his current position: He’s always seeking answers, and when he finds them he can explain them easily to people.

The skill still helps him during daily interactions with customers, employees and board members of his primarily agricultural territory, he said. Although agricultural commodities have seen high prices recently and the local economy remains strong, there are issues. Heinz often finds himself explaining the correlation among electricity, water use and jobs.

“For most of the last 10 years, Nebraska was in a severe drought that only recently was broken,” he said. “During the drought, policies were enacted to reduce irrigated acres to enhance stream flow on the Platte River, which runs through our service territory. Dawson serves over 5,600 irrigation wells, many of which could be subject to shutdown.

“We first examined the issue from lost revenue and stranded investment scenarios, both of which could have significant impacts on the utility. Then we took the next step and commissioned an economic impact study by the University of Nebraska Department of Business and Economics to model the cost to the local economy of reducing irrigated acres by 2.7 percent in our service territory. The study indicated a multimillion-dollar reduction in revenues to our farming customers and agribusinesses and reduced taxes for our political subdivisions, not to mention numerous job losses.”

Public power districts in Nebraska are organized as political subdivisions of the state, Heinz said, so the districts must assist economic development.

“While we expend great effort to attract new business, we had better take care of those who are currently doing business here,” he said. “Smart regulation should take into account the economic impacts of that regulation.”

When a good storyteller weighs a tough decision, it’s not a problem—it’s a “climax.” It draws an audience in and makes for a juicier story. The climax of Klappa’s story involved advice he’d given. Heinz’s involved military advice he’d received years before.

“Probably the most difficult decision over the course of these three decades was a recommendation I made to the CEO of Southern in the year 2000, in essence, to separate out and do a spinoff,” Klappa said.

Southern Co. had invested a considerable amount of money outside the U.S. Klappa said it became clear to him that the characteristics of Southern Co.’s core business differed from the foreign ones. Both companies—Southern Co. and Southern Energy—could reach their potentials through an initial offering of public stock and subsequent spinoff, he said.

His recommendation was accepted.

The story Heinz tells occurred in 2006 and 2007. It was winter, and successive ice storms knocked out Dawson Public Power District’s electrical distribution system with a holiday one-two punch.

“As evening approached just as the first storm was hitting, it became apparent to me that the damage was substantial, and having our crews work at night in the blizzard conditions would be ineffective,” Heinz said. “I decided to pull the crews in for the night to get some rest and start fresh in the morning.”

The decision didn’t fly with customers and the media, who wanted immediate results, he said.

“Having spent many years in the military, I understood the issue of sustainability,” Heinz said. “You cannot work men and equipment safely in those conditions for very long and hope to get your system restored. Dawson crews ended up working long hours for over one month straight until every customer’s electric service was restored.

Institutional Investor magazine named Klappa to its 2011 All-America Executive Team. He also ranked second among CEOs in the electric utility industry and first among regulated utilities.

For a CEO, Klappa said, the most important element is execution.

“On time, on budget, delivering what you said you would deliver,” he said. “The absolute key is executing your plan as flawlessly as you can.”

He has three “generic pieces of advice” for those who aspire to replace him one day:

“Keep an open mind as the future is full of surprises,” he said. “Read everything you can on all aspects of the industry as you never know where those surprises will come from. Be flexible as the future is continually evolving. Embrace new technologies as they will help you to understand and be effective in that new future. Keep a positive attitude because that is just about the only thing that you can really control.”

He also has advice for current leaders regarding their employees:

As good storytellers do, Heinz concluded with a line to remember.