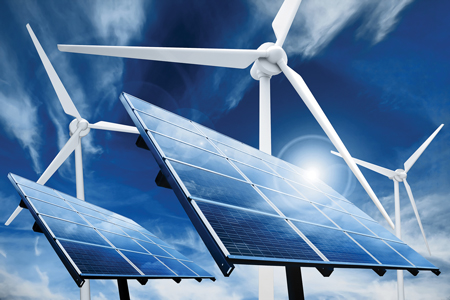 The nation’s investor-owned utilities are leading a clean energy transformation that is already coming to fruition, the head of Edison Electric Institute told Wall Street analysts, bankers and investors Wednesday in New York.

EEI President Thomas Kuhn, whose organization membership is made up of investor-owned utilities, spoke on the state of the U.S. electric power industry at the EEI Wall Street Briefing.
“We are united in our commitment to get as clean as we can, as fast as we can, while keeping customer reliability and affordability front and center as always,” Kuhn said, according the EEI report of the briefing. “Collectively, we are on a path to reduce carbon emissions 50 percent by 2030, and 80 percent by 2050, compared with peak 2005 levels. Our goal is to give our customers an energy future that is cleaner, smarter, and stronger than any they have known before.”

Kuhn’s theme was bolstered by strong statistics showing the transformation of the electric power sector. Members utilities have reduced carbon dioxide emissions 30 percent below 2005 levels. Nearly 40 percent of the nation’s utility-scale power generation comes from carbon-free sources, such as nuclear, wind, solar and hydro, according to the EEI presentation.

The electric utility sector, meanwhile, has invested close to $1 trillion in smart energy infrastructure over the past decade, according to reports. This includes installation of about 98 million new advanced meters nationwide.
In addition to highlighting the steady and strong transition to clean energy, EEI’s executive team also outlined the opportunities to electrify and reduce emissions from the transportation sector; the importance of modernizing the energy grid to make it more dynamic, more resilient, and more secure and of developing innovative customer solutions; the industry’s financial strength and ESG/sustainability reporting; and the current political and regulatory landscapes.
“The electric power industry has made tremendous progress over the past decade, and we are excited to build on our progress in the decade ahead,” said Kuhn. “As always, EEI’s member companies will remain laser-focused on delivering the safe, reliable, affordable energy our customers need and expect.”

Edison Electric Institute represents all of the U.S. investor-owned utilities and includes numerous international power generators among its members. Its U.S. members provide power to more than 200 million Americans in all 50 states.