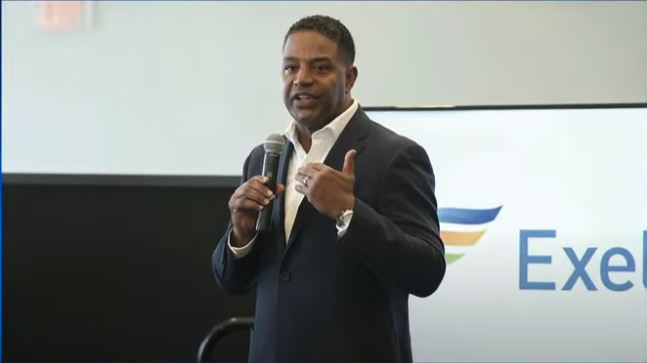 Butler joined a roster of accomplished Black leaders of Fortune 500 companies and government organizations recognized at the BEYA STEM conference for their service and dedication to opening doors for Black people in STEM.

The Chairman’s Award is not given annually, but rather when warranted for outstanding contributions.

“To whom much is given, much is required,” Butler said in his acceptance speech. “We’re committed to standing up, stepping up and being the change we’re all talking about. Teamwork, partnership and service have powered my contributions and impact. That same combination can power a cleaner, brighter future for all of us.”

Exelon President and CEO Chris Crane commended Butler during the program, saying “He’s got heart for the employees, for the customers and for the communities we serve.”

Read this post by Calvin G. Butler, Jr.: We need to listen to the experts: Clean transportation saves lives

Under Butler, Exelon Utilities’ focus on STEM-related workforce development efforts is yielding significant results and powering opportunity for the communities Exelon serves, according to the utility.

In the last 18 months, Exelon workforce development programs have resulted in more than 700 new hires at Exelon and companies with which it partners.

The BEYA program is viewable here. The Chairman’s Award is given to Butler at 26:40 in the recording.