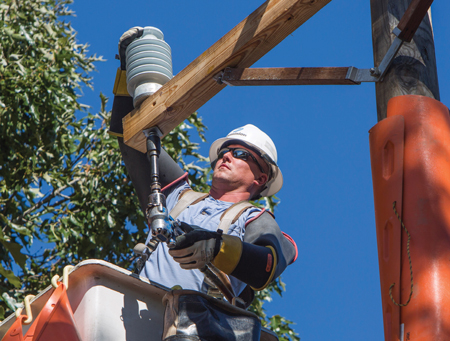 Editor’s Note: Hurricane Matthew tore through the western hemisphere like a bat out of hell in September and October. The once barely perceptible tropical wave out of Africa’s west coast gained force as it rolled across the Atlantic and through the Caribbean islands into the mainland U.S. More than a thousand people died and millions were displaced and lost power as the storm spit out its violent rain and wind upon the power grid.

Eastern U.S. utilities were ready for Matthew and responded in impressive fashion to deal with its aftermath. This story recounts the efforts of two utilities-Dominion Resources and Duke Energy-as they dealt with the fury and reconnected customers despite flooding, downed power lines and massive destruction. Two others-Florida Power & Light and George Power-handled their post-Matthew tasks with stunning resolve and readiness, but did not contribute to this story.

Virginia-based blogger James Bacon focused on Dominion’s response (slightly edited for space limitations) while Duke Energy offered a first-hand account of how it dealt with one of the biggest hurricanes in years. Here are their stories:

Jeffrey A. Hutchinson, manager of Dominion Virginia Power’s central operations center, first took note of Hurricane Matthew when the storm first began to form off Africa. Keeping tabs through the company’s two meteorologists and subscription weather services, he tracked its progress across the Atlantic Ocean. He felt relieved when the storm seemed to be heading toward the Caribbean-Virginia would dodge another bullet. But then it took a hard-right turn, barreling north along the Florida coast.

The operations center, which coordinates Dominion’s response to major storms, needed to get ready. One way or another, Hutchinson knew, he and his team had a long week ahead.

Sept. 25, 2016: Tropical wave forms and moves away from coast of Africa

From Various Sources, including National Geographic

“We went from thinking that Matthew wouldn’t impact us, to thinking that Florida would be impacted and we’d need to send help, to realizing that we’d need help,” said Robbie Wright, director of planning and system reliability.

When a big storm threatens, Dominion mobilizes with one aim in mind: to restore electric power to as many people as possible as quickly as possible. Over the years, the utility has developed a system for coping with catastrophe. The linemen comprise the visible, front-line force, clearing trees, patching power lines and restoring substations. But they are backed by an extensive back-office staff that identifies issues and organizes a response. Everyone in the company from accountants to customer service reps has a designated support role, whether they’re patrolling power lines in the field or managing logistics in the operations center.

That system kicked in for Matthew. Even though the storm lost its hurricane force by the time it reached Dominion’s service territory in North Carolina and Virginia, it still packed a wallop. Gusts of wind reached 70 mph in the Outer Banks. While the storm surge was mild, seven to 10 inches of rain caused more flooding than anyone expected. According to spokeswoman Janell M. Hancock, Matthew was the ninth most destructive weather event in Dominion’s 100-plus-year history.

The high winds and heavy rain knocked out service to about 350,000 customers in Dominion’s eastern region and another 90,000 in the central region. Repair crews had to replace 285 poles, 870 cross arms, 2,100 insulators, 730 cutouts, 260 pole-mounted transformers and more than 22 miles of overhead wire.

One of Dominion’s top management priorities is reducing routine power outages and restoring power after major weather events as rapidly as possible. Preparations begin long before the bad weather hits. The company maintains a “portfolio” of programs geared to improving reliability year-round. Initiatives range from aggressive tree-trimming along power lines to upgrading sensitive equipment to stainless steel to protect against salt corrosion in coastal areas.

Dominion spends about $200 million a year reconditioning its distribution system (which steps down electricity from the high-powered transmission lines to lower-voltage lines serving homes and businesses), said Hutchinson. Some of that money goes to “hardening” infrastructure, some of it to installing sensors that detect power interruptions, and some of it to systems that allow control room operators to reroute electric flows.

As Matthew approached Virginia and North Carolina, Hutchinson huddled with his staff to prepare for impact. Dominion belongs to a mutual-aid consortium of power companies that send crews to help one another during emergencies. As the storm track shifted, the power companies were in continual communication, conferring on who needed how much help and where it would come from. Dominion actually sent some of its contract crews down to assist the Florida clean-up; just as their work was finished there, they had to high-tail it back to Virginia.

Normal life shut down at Dominion as employees were dragooned into emergency positions. To keep people informed, communications teams interacted with the public and the news media, while other staff coordinated with cities, counties and towns on emergency response.

Meanwhile, 900 employees from utilities as far away as Massachusetts and Florida traveled to Virginia to help with the restoration. Outside crews don’t show up and go straight to work, Hutchinson explained. Someone has to manage the lodging, travel and feeding of these crews. Someone also has to instruct them on the particularities of Dominion’s distribution system. All those tasks fell to Dominion employees.

Dominion’s teams worked 14 to 16 hours per day through the crisis, leaving enough time for people to get a full night’s sleep. Safety and good judgment are paramount, said Hutchinson, and it doesn’t help anyone to have sleep-deprived workers making decisions.

It isn’t easy staring at a computer monitor for hours on end, so the company keeps the food and caffeine flowing during storm responses. Operations veterans joke that a storm is a “five-pound storm” or a “three-pound storm,” depending on how much weight they put on.

Matthew was a three-pounder, quips Hutchinson: severe, but mild compared to Hurricane Isabel, Hurricane Irene and the Derecho. The storm hit on a Saturday but everyone had their power restored by Thursday. All things considered, he said, he’s proud of the job his team did.

“There’s a real sense of satisfaction … to see the lights come on for our customers quickly and safely.”

In Florida, more than 300,000 customers lost power after high winds and torrential rain pummeled the area. Then a few days later, Matthew unleashed its fury across the eastern parts of North and South Carolina delivering a punch so hard that more than 680,000 Duke Energy customers were without power at one point Sunday morning, Oct. 9.

Matthew was the first hurricane to make landfall in Florida in more than a decade. In the Carolinas, the storm would go down in Duke Energy’s history books as the fifth-worst storm (by outages) with damage comparable to Hurricane Hugo in 1989 and Hurricane Floyd in 1999.

Matthew began as most hurricanes do-well off the east coast as a “tropical disturbance” named Invest 97L. Duke Energy’s staff of experienced meteorologists was tracking Invest 97L long before it had a name and long before it was a threat to the U.S. Based on forecasting models, however, the company began making plans for a significant event:

“- Line workers, tree crews, damage assessors and support people were staged in locations near the storm’s projected path so they’d be in place and ready to begin restoration efforts;

“- Hundreds of employee volunteers were trained to support the existing call center staffs in taking and reporting power outage calls;

“- And, the company’s Joint Information Center was activated, ensuring accurate, relevant and timely information to customers about what to expect and how to prepare.

From the time the crews received the all-clear to safely start restoring power, they didn’t stop. Wind, rain, heat and floods were just some of the challenges crews faced while they endured the elements working 16-hour shifts. In Florida, more than 3,500 line workers restored nearly 300,000 outages in less than 72 hours; in the Carolinas, 10,000 line workers set a record-pace restoring 1.5 million customers in under a week.

Through it all, Duke Energy remained focused on keeping its customers updated. From Facebook Live updates with crews to video updates from the storm directors, the company worked to ensure its customers had the information they needed to make decisions and understand what to expect about restoration efforts.

The storm is long gone, but few will soon forget Hurricane Matthew. A powerful and deadly storm that killed dozens of people and left hundreds more homeless. Duke Energy is committed to helping these devastated communities get back on their feet by rebuilding the electrical system, working with customers still dealing with the storm’s aftermath and supporting employees who continue to participate in volunteer efforts.