by Wendy A. DeVries, Consumers Energy

The Need for GIS

To respond adequately to outages, Consumers Energy dispatches crews from several locations. As storms approach, the utility calls crews to report to their stations and receive instructions from their dispatch locations.

Prior to deploying the current outage management system (OMS), dispatchers and crews relied on limited customer call information. With a less than efficient method to organize outage information, Consumers Energy met difficulty in relating outage incidents to one other.

For example, a large outage incident such as a blown lateral fuse bank could be obscured by reports of downstream incidents such as downed power lines. It was difficult to prioritize crew repairs and efficiently restore power. In addition, the utility can receive tens of thousands of customer calls reporting outages. As call volumes increase, so does the likelihood of duplicated incidents, which can hinder restoration.

After evaluating its operational systems, Consumers Energy determined it must update its mainframe-based OMS to an advanced, geographical OMS that would provide visual and analytical capabilities that would represent more clearly conditions affecting its distribution network. Consumers Energy looked toward geographic information systems (GIS) technology that digitally maps physical assets and spatial relationships within the service territory in relation to real-time outage data. GIS can help manage and update company data, so more utilities are using it to assist with distribution analysis, load forecasting, asset management and other essential business functions. 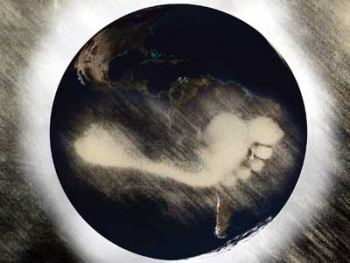 Consumers Energy contracted with smart grid solutions provider Telvent to implement ArcFM GIS. The company equipped the utility with the mapping and data management capabilities necessary to improve internal operations, including outage management. During summer 2008, Consumers Energy deployed Telvent Responder OMS, which operates as an extension of the utility’s ArcFM GIS to enhance the existing outage response plan. It incorporates an outage map with the utility’s physical assets and provides staff with a tabular, graphic display of the magnitude and correlation of events during storms.

The Web-based functionality allows many utility staff members in multiple locations simultaneous access to outage information in Responder OMS. Call center representatives can use the Web-based functionality to record accurate, specific outage incidents in real time. For example, a caller might report a downed power line on Main Street. The call center representative can access the OMS to enter the detailed incident information. The incident may be viewed on the service area’s GIS-generated map to aid dispatchers and crews in outage restoration.

Control center and dispatch station supervisors access Responder OMS to monitor incoming incidents, diagnose disruptions and schedule and dispatch repair crews. The color display provides a graphical representation of the current outage situation and active incidents. As more incidents are added, the system analyzes the outage data and generates an outage-prediction location. It also organizes and analyzes recorded incidents to predict whether a string of outages are connected to a larger outage at a substation, fuse or breaker. Consumers Energy supervisors use this information to more effectively prioritize and dispatch crews to handle the most urgent repairs that affect the most customers.

With a GIS-based OMS system, crew location and information can be tracked visually. This allows dispatchers to view repair crews’ current locations, monitor their progress and direct them to the next, nearest outage once an incident has been completed. In addition, repair crews in the field can view and update OMS incidents with mobile devices in each repair vehicle.

By the end of the storm, more than 90,000 Consumers Energy customers experienced interrupted service. The damaging winds and severe storm conditions caused extensive wire damage and broken poles. With a GIS-based OMS, Consumers Energy obtained a clearer perspective surrounding outage situations and gave a more organized strategy to restore power more quickly. Despite damage across a wide area of its service territory, Consumers Energy restored power to all customers within a few days.

Once storms pass and service is restored, utilities must prepare outage reports to state regulators. Consumers Energy filed reports with the Michigan Public Service Commission. The utility turned to its OMS for data collected during the storm. Telvent Responder OMS produced analytical reports regarding outages and reliability indices. These reports provided documentation based on historical data.

Looking to the Future

As technology evolves, more emphasis is being placed on how smart grid functionality can be leveraged within electric utilities.

Investing in an advanced, GIS-based OMS was the first step in developing a smarter operations process that would better serve Consumers Energy&apos;s customers. The utility ensured that the GIS and OMS tools were expandable and could be integrated with additional operational systems, such as smart meters and SCADA.

For example, Consumers Energy is creating an interface to OMS for its upcoming deployment to smart meters. Telvent’s Responder OMS will be able to visualize and operate on smart meter events to help dispatchers see a broad picture of the outage before customers begin calling the utility. Dispatchers can verify meter status and assure restoration has occurred before crews leave an area, which reduces field costs and improves customer satisfaction with quicker restoration times.

Author
Wendy A. DeVries is a general engineer at Consumers Energy.