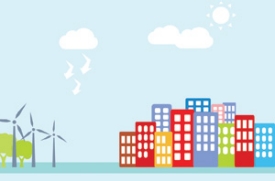 Thirty-seven states have adopted renewable portfolio standards or goals. As a result, electric utilities across the U.S. have implemented renewable energy programs.

In Palo Alto, 21.5 percent of the municipal utility’s customers participate in a renewable energy program—the highest customer participation rate in the country, according to NREL.

“Our program is quite successful because we have a community of people who are very interested in sustainability and the environment,” said Joyce Kinnear, CPAU utility marketing services manager. “The program began because customers asked CPAU for such a program.”

Kinnear attributes much of this success to customer interest and Palo Alto Green, a simple renewable energy program tailored to those interests. The program offers subscribers the option to purchase renewable energy certificates for part or all of their energy use, Kinnear said.

And because CPAU is a muni, it is regulated by the local community, not the California Public Utilities Commission.

“For a community to have a successful program, I recommend having a program that is easy—one type of payment, for example—clear to understand, and focus on the things that are important to the local area,” she said. “For us, wind and solar resources were most important to our community.”

Being active in the local community is essential to a utility’s success, said Steve Mudd, product portfolio manager for Xcel Energy’s Windsource program.

“I know there are hundreds of utilities that have some sort of program, and it’s very easy to just offer something on a website,” Mudd said. “But if you’re not actually out there actively engaging with your customers, telling them about the program, asking about what they want and what their needs are, you can’t design the program around them.

“That’s something we’ve been able to do: Keep that dialogue open with customers, and that’s helped us.”

Windsource began as a grassroots movement in Colorado and is now available in five states: Colorado, Minnesota, Michigan, New Mexico and Wisconsin.

“In the early days, when the program first started in Colorado, there were some internal development ideas for a renewable program,” Mudd said. “But we also worked with active groups in the community, particularly Western Resource Advocates, who worked with us and worked with the commission to come up with the program.”

Having the Windsource program in Colorado also enabled Xcel Energy to adapt the program easily to meet legislative requirements in other states, he said.

“Minnesota was one area where we probably would have launched the program, but the legislative requirement came along and we were able to just plug it in there,” Mudd said.

Colorado and Minnesota also have been epicenters of booms in commercial sales for Windsource. More businesses are using renewable energy to demonstrate their environmental commitment and meet environmental goals.

“As more and more businesses seek out renewable energy solutions like Windsource, I think the utility industry needs to pay attention. We need to ask, “ËœHow can we better meet the renewable energy needs of our commercial customers?'”

“As a business, if you have a general idea of how many kilowatt-hours you use annually, you’d know exactly how much your electricity is going to cost for the next 10 years,” Cordova said. “Knowing that usually unknown cost is a huge competitive advantage for a business, so when we started offering that locked-in, green power price to replace the fuel charge, the program just took off.”

“The reason we locked in the price was to hedge against the fluctuating price of fossil fuels like natural gas,” Cordova said. “Customers saw the advantages of this around Hurricane Katrina and Hurricane Ike, when natural gas prices went up to $14 per MBtu.

“Four of the six batches that we’ve offered, customers have wound up paying less than the conventional fuel charge.”

Austin Energy remains in the planning stages of a blended energy choice, which would not be deployed in batches. GreenChoice’s current batch, batch six, is doing well, despite a poor economy and higher fuel price, Cordova said. This is largely because of the city’s Climate Protection Plan passed in 2010, which created a goal of 100 percent green municipal operations by 2012. Austin is the largest U.S. city to operate 100 percent green city facilities. Having enthusiastic and environmentally aware residents is important for Austin Energy’s success, Cordova said.

“Even though their subscriptions might not be as large or make up the majority of the program, residential customers are the driving force behind the program,” Cordova said. “Because Austin is a very environmentally conscious community having active, participating residents that want green energy in their community, they help guide the program.”

“At the onset of any new program, it is important to communicate the availability of the program,” she said. “When National Grid launched its GreenUp program in the Granite State area, a comprehensive marketing plan was developed, including a direct mailing to eligible customers, email blasts, a telemarketing campaign and print ads.”

In addition to an initial large marketing campaign deployed by National Grid, continually engaging with customers is essential to long-term success within the program, said Charlotte McCormack, media relations representative at National Grid.

“Massachusetts has recently overtaken California as the most energy-efficient state in the country,” McCormack said. “It speaks to the fact that our customers and residents across the states are extremely conscious about energy efficiency and strongly support sustainability. We owe a lot of the success of our programs to them.”