I came across your story during research on a story we are doing for our October issue on “The ‘green’ role in manufacturing.” Like you, I found myself struggling trying to define green. How could I ask questions if I could not define what I meant by “green?”

As part of the story, I sent out questions to some 50 manufacturers, large and small. As I could not define green, I decided to turn it around, so my first question was: How do you define green? Needless to say, I had a wide range of replies.

I still do not have a definition of green, but after reading your piece, I feel better about that. Further, to make lemonade out of this angst, I plan to do a sidebar on “The defining of green.” I plan to include some of your observations in that piece, duly citing you and your publication. It may be limited to just the comment from the BLS official, which is perfect. If he can’t define green, who can?

It strikes me that green is an easy tag one can use, but that for manufacturing (our niche) it can be broken down into two things: how a company operates and its products. All things stem from there.

Wind Power is Not the Answer

Regarding “Why Offshore Wind is Viable for Northeastern, East Central Coastal States” under Renewables in your July/August 2010 edition, I offer the following comments:

Like the ethanol push during the past 10 years, resulting in making a few people rich while the rest of us paid more to put food on our tables, we now are to become the victims of wind turbines placed along the shores of our oceans and lakes. It is interesting, with Hurricane Earl approaching the Eastern Seaboard, what would be the effect on turbines to withstand such a storm? In addition, with the article’s author being counsel for an investment group while governments are broke and banks aren’t willing to lend money for capital projects, who’ll ante up? 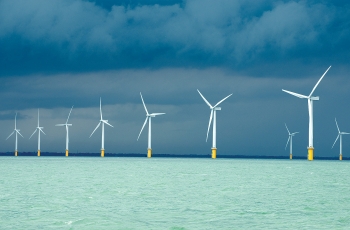 On the federal level, it’s surprising that there’s Republican participation, as they’ve never been concerned with environmental issues in the past (if this is actually one of them?). It’s stated that wind will provide 20 percent of our electrical need by 2030. I heard 5 percent by 2020. That means there’ll be a fourfold increase in 10 years. How so?

I’m an environmental advocate and mechanical engineer retired from 30 years of governmental service, and all this wind-turbine-over-water routine is pure idiocy! They cost four times more to put them over water than dry land. Why would Canada, being land-rich, put them out in the Great Lakes? If it’s a question of transmission costs, then why are we putting photovoltaic cells in the Desert Southwest if it costs too much to send the power? Every day I’m learning something new about wind turbines. They are maintenance-proactive and certainly not “turnkey.” Because of Lake Erie’s capability to ice over during cold winters, they are concerned about the turbine foundations’ withstanding such conditions. The city of Evanston is reviewing several proposals that were submitted, but it has no advancement money to put on the table.

Then there’s the problem of environmental impact, which can affect these projects in their entirety. Airplanes, boats, noise, bird migration patterns, effects of electric current on fish, etc., are all factors to be considered in any granting of approval for the same. Also, the Occupational Safety and Health Administration is developing safety standards for working on wind turbines. (There already have been injuries and death associated with this new technology).

Don’t forget that we need a grid system with connected substations for each wind turbine application.

We shouldn’t proceed haphazardly with something of this magnitude. There’s a limit to what renewable energy can provide, and we should employ the most sensible and cost-effective means. We’ll still rely on nuclear or fossil fuels for most of our energy needs unless we want to restructure our lives back to 100 years ago. My answer to paying 20 cents per kilowatt-hour now for electricity generated by wind turbines in Lake Michigan is no!

I just wanted to write to tell you how much I enjoyed your article “Taking Open Access Beyond ‘Tyranny of Small Decisions.'” As a negotiator for Missouri in the cost allocation process at MISO, I think you hit many of the important points as we try to figure out how to build needed transmission while ensuring that the costs are allocated fairly. I do not know what the answer is, but at least you identified what should be considered. Thanks again for a thoughtful column.