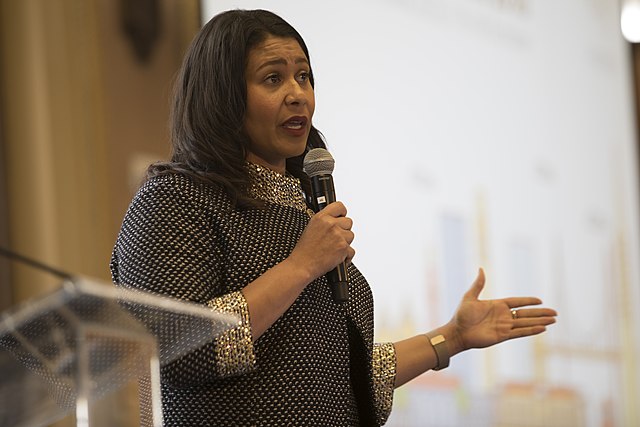 San Francisco Mayor London Breed wants to use PG&E Corp.’s bankruptcy to take over some of the company’s assets for the city’s power needs, a move that would shake up California’s largest utility and remake the state’s energy landscape.

Breed said she sees an opportunity to deliver clean power to her residents while keeping rates as low as possible. She’s awaiting the release of a study later this month that would outline the feasibility of assuming control of PG&E’s local infrastructure.

Breed’s remarks showed the potential for sweeping change at San Francisco-based PG&E, which filed for bankruptcy in January under the weight of an estimated $30 billion in liabilities from wildfires. The mayor spoke in a wide-ranging interview in which she also discussed the city’s homelessness crisis and appealed to companies to support her efforts to make use of a controversial tax to address it.

California leaders have been weighing ways to reshape the state’s utilities and their liabilities from wildfires in the wake of PG&E’s bankruptcy. Breed said she has been talking to the team of advisers assembled by Governor Gavin Newsom on the issue.

Newsom last week unveiled a range of options for the state to examine, including “municipalization” for PG&E if it didn’t change its behavior. Breed said Wednesday that one of her two nominees to the city’s Public Utilities Commission, which could help expedite decisions on a takeover, had worked to shut down a PG&E plant in her district as a city supervisor. The appointee, Sophie Maxwell, was “all in” when Breed started talking about the prospect of obtaining some of the utility’s assets, the mayor said.

San Francisco now runs a clean-power initiative that buys renewable energy and distributes it on PG&E poles and wires. Breed said that even before she was mayor, she believed PG&E had the resources and technology to make clean-energy changes at a quicker pace.

The city is on track to meet 80 percent of electricity demand under its program, the mayor’s office said. Its success is demonstrated by the low numbers of residents opting out, she said, which shows that taking over PG&E’s local system would be “just another layer.”

“We would be capable of doing it and doing it well,” Breed said.

She expects the feasibility study to tackle questions on what the city could acquire, and Breed said she would be sensitive to costs. “The goal is to do everything we can to not raise rates,” she said.

In a statement, PG&E said it supports customers’ ability to make choices on their energy use.

“PG&E regularly evaluates the way the company is structured strategically, operationally, and financially so that we are best positioned to operate efficiently and to provide safe and reliable service to our customers,” the company said.