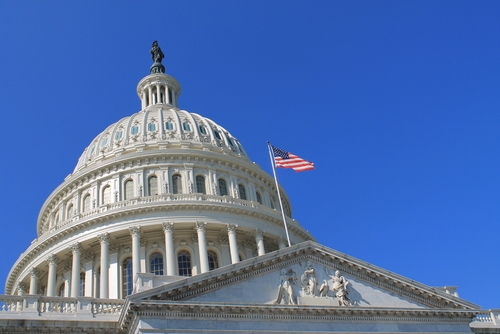 “We worked with Sen. [Maria] Cantwell [(D-Wash.)] literally on and on throughout the whole process,” Murkowski, chairman of the Senate Committee on Energy and Natural Resources, said.

Their staffs worked to share their ideas and on listening sessions that were held.

“After the listening sessions, we held legislative hearings – a series of them – covering a total of 114 bills from members on both sides of the aisle,” Murkowski added. “Then, it was weeks of bipartisan negotiations to see what would make the base text of our bill even better. There were many, many who doubted our ability to find common ground on energy policy, ” but what we agreed to in committee was a strong package that focuses broadly on efficiency, supply, infrastructure and accountability.”

The bill addresses, among other things, electric reliability and renewable resources, such as hydropower, she said.

“We reported this bill from committee last July – strong bipartisan vote – and it is now before us on the Senate floor,” she said. “We have added to the good work that the committee did by accepting a total of 32 amendments by voice or by roll call vote; we did that several weeks ago.”

Innovation is not a separate title within the bill, she said, adding that instead “it’s literally a river that runs through it.”

The bill, for instance, seeks to make it easier for small businesses to access National Labs, Murkowski said. In addition, it increases the authorization for the Office of Science in the U.S. Department of Energy, she said.

“[T]hrough the leadership of Sen. [Lamar] Alexander [(R-Tenn.)], our committee also agreed to reauthorize ARPA-E for five years, with 4 percent increases in funding each year,” she said. “And then, more recently on the Senate floor, we accepted an amendment from Sen. [Brian] Schatz [(D-Hawaii)] from Hawaii that will increase ARPA-E’s authorized funding even further.”

Based on the results received so far, she said that she has “every confidence that will happen, and that this program will continue to grow.”

Noting that the bill has been held back “longer than I would have liked,” Murkowski said: “[W]e are working hard to resolve those concerns so that the bill can move forward. We are almost there and when we finally do make it to that finish line – when we finally do get this measure signed into law – it will be a true victory for American innovation.”

At the beginning of her remarks, she noted that energy innovation is inextricably linked to the country’s future.

“Innovation is capable of delivering long-standing benefits, both for our nation and for the rest of the world,” she said. “We know that it creates jobs, it boosts growth, it adds to our security and increases our competitiveness.”

The most recent example of that has been seen with the shale revolution, which Murkowski said has dramatically increased the amount of energy that is produced in the United States. That revolution, she said, also helped lift the country out of the recession and it continues to help lower energy prices. Additionally, it brings a wide range of jobs back to the country and works to reduce the emissions that are blamed for climate change, she said.

“I welcome all of those benefits, but I also understand that none of them would have been possible without innovation, without the development and without the application in new technologies by American researchers and entrepreneurs,” she said. “It really has made me thankful to live in a country that has committed to a strong system that promotes innovation by individuals, by private companies, colleges and universities, our National Labs, and programs like ARPA-E. But the need for continued innovation is as pressing now as ever before.”

There are countless discoveries yet to be made that can change the world, boost growth, strengthen security and protect the environment, she said.

“[W]e need to keep pushing for those breakthroughs and as we do, we need to remember those who need them most,” she said.

Murkowski noted that as she travels to small villages in Alaska, she sees firsthand how the high price of energy destroys opportunity and “makes life even harder than it already is in this sometimes harsh environment.”

She added: “We need to find ways to ensure that energy innovation continues and accelerates. We need to ensure that our scientists and our engineers can pursue their dreams and their ideas and turn them into reality for the good of all.”

As noted on ARPA-E’s website, while the America COMPETES Act of 2007 authorized the establishment of ARPA-E within DOE, ARPA-E did not officially come into existence until early 2009 when it received $400 million in funding through the American Recovery and Reinvestment Act.