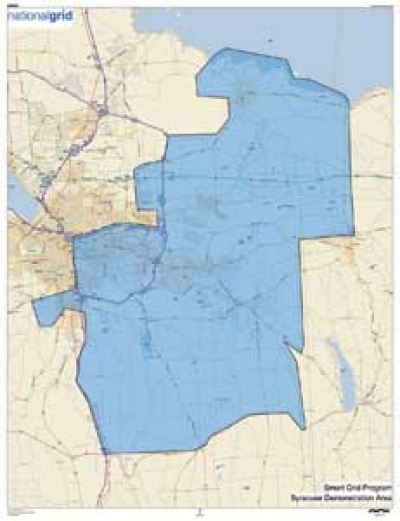 National Grid has proposed a comprehensive smart grid demonstration program that will serve as a test site for the energy grid of the future and provide a more holistic look at smart grid technology available today. That’s right. This pilot is about more than just smart meters.

The Secrets of Syracuse

The company’s plan calls for a test site of 39,400 homes and businesses in the Syracuse, N.Y., area that will use new, state-of-the-art equipment to give customers information about their energy use and tools to reduce their carbon footprint and manage their energy costs. Pratt said that Syracuse was the perfect test site for the project for a number of reasons, not the least of which is just how average the spot is.

“We wanted an area that looked and felt like our customer base,” Pratt said. “That’s Syracuse. The region’s make-up will give us a clear picture of how this project might work with 90 percent of our customer base.”

And, it’s not just the people making things so cross-the-board beneficial. Syracuse has just the right combo of substations, feeders and smart grid components to give National Grid a great view of how the smart grid might benefit both the company’s customers and technology. Additionally, a fiber backhaul distribution network is already in place in Syracuse, which offers a cost advantage when implementing smart grid.

“Syracuse is just a good mix of income levels, network configurations, substations, overhead and underground lines. Plus, there’s existing and proposed distributed generation we can figure into the mix and a university that has dedicated programs on environmental and energy issues,” Pratt said.

The pilot project needs public service commission (PSC) approval before it can get fully underway. Once that approval is passed down, the pilot will go through an advance procurement phase to bring in items that require a long lead-time or backorder. Rather than the typical metering project, the Syracuse pilot will incorporate communication technology, switches and controls, and back-office databases.

National Grid started the ball rolling, using its Smart Grid Technology Center to test out vendors (see sidebar). Over an 18-month period, the company talked to nearly 100 technology vendors touting their smart grid products. National Grid has narrowed the field down to fewer than 20 to work with at the Center.

Pratt figures they can do meter and grid upgrades almost immediately once the approval is garnered, starting within a couple of months. But, it may be a year before customers notice a change.

“It’s an aggressive time frame,” Pratt admitted. “And the sooner it’s all in place, the faster we can get things up and running and get real data with real results.”

Why the rush? Well, part of it may be a company vision of a lovely and rosy smart grid future, but a lot of it is numbers, namely the numbers in the New York State Energy Plan.

Like many other state energy plans, New York’s wants to change the face of power—and quickly. It requests a 15 percent reduction of electric use and a 30 percent mandate for renewable generation by 2015. Both goals will require a smart grid—hence, the fast pace of the Syracuse pilot program. Once approved, it will take two to three years to complete. That leaves only about two years remaining to implement tech changes to reach that 2015 goal.

The process isn’t without problems. That approval isn’t a given, and bigger rate case issue is looming as well. While approval doesn’t look impossible, it could be pushed to the bottom in order for the rate case to take precedence. Pratt noted that National Grid has “made a strong argument to expedite approval,” but the process does take time.

To Syracuse and Beyond

So, why go through all the rigmarole? Why get approval and create a smart grid pilot that deals with substations and meters, customers and vendors? Why not just start remaking the whole grid with the company’s smart grid theme? Tom King, National Grid’s president in the U.S. has called the smart grid “the backbone of the new, clean energy economy.” Shouldn’t National Grid, therefore, just leap in with both feet?

“National Grid is very interested in rolling out smart grid to our entire customer base,” Pratt said. “But, we need this pilot. We need to walk before we can run. We need to make sure the technology works well and brings the customers the right benefits.”

So National Grid will be using the Syracuse pilot (and a similar one in Massachusetts) to ask all the right questions: Is our approach correct? Do we have the right technology in place? Can we apply this to a larger customer base?

Pratt hopes the project, if approved, will have significant near- and long-term benefits to customers in the pilot area and to the overall economy of upstate New York. When the pilot was announced, King touted job creation as one major benefit to the community. Pratt added details that focus on the customer, from residential to commercial: customer choice, potential to reduce bills by a conservative 5 percent, increased customer service, better system reliability and improved power quality (which could significantly benefit high-tech commercial and industrial customers).

“And, really, it’s exciting. This project is exciting,” Pratt said. “It’s the chance for Syracuse to become a real smart grid showcase.”

In December, National Grid was selected as a sub-applicant in a recent Department of Energy (DOE) award for a three-year project that will demonstrate advanced energy storage in several locations, including Syracuse. This funding will be used in the Syracuse area to install two energy storage units at one of its substations and the third at Syracuse University to demonstrate and study the importance of energy storage for managing increased use of renewable generation and the improved reliability of the distribution system. All of that will help greatly with New York’s Energy Plan push, as well as National Grid’s smart grid timeline.

“Smart grid is important to National Grid. It’s a big part of our company vision moving forward. Additionally, the smart grid, and this pilot project in particular, can be a part of the solution, a way to help New York achieve its energy goals. But, the time to act is right now,” Pratt said.

National Grid is an international energy delivery company. In the U.S., National Grid delivers electricity to approximately 3.3 million customers in Massachusetts, New Hampshire, New York and Rhode Island, and manages the electricity network on Long Island under an agreement with the Long Island Power Authority (LIPA).

National Grid’s Smart Technology Center (STC) in Liverpool, N.Y., will be a major part of the Syracuse pilot program. The STC is a comprehensive state-of-the-art outdoor laboratory and training facility that tests and evaluates smart grid technologies to ensure safe, secure and reliable equipment performance prior to deployment. Pratt called this “proof of concept”: Can the meter do what its vendor claims? Is this switch working the right way? What happens if we plug in a solar panel from the outside?

The STC allows National Grid to create hands-on demonstrations of tech ability on what is essentially a mini-microgrid, giving comfort to the utility about vendors and products that pass the testing process. The Center has been up and running for about six months

In addition to testing smart grid equipment for the proposed Syracuse area site, the lab tests equipment for other sites within National Grid’s U.S. service territory.

Switching off customer loads for demand response (DR) is an established practice. There are customers, however, that may have little discretionary load—so their participation in DR programs is limited. Customers meeting this profile are wastewater plants, hospitals, food manufacturing, frozen food storage, data centers, municipal and government services and other facilities with mission critical operations.

Due to the critical nature of their operations, these customers often have substantial on-site generation systems (OSGS) so that in the event of a utility outage, their operations are maintained. The existing OSGS are typically designed for stand-by use only and employ open transition transfer switches for utility or OSGS power source selection.

Some detracting factors for using OSGS in such equipped facilities to assume some or most of their load in callable DR applications are:

To overcome these factors, paralleling switchgear can be used in place of the transfer switch. The paralleling switchgear employs two circuit breakers, protection and control for proper and safe parallel operation of the OSGS and the utility, eliminating interruption of the customer’s load. Communication systems, typically employing broadband over Internet, are used to provide the DR dispatch and comprehensive monitoring. Communications also allow remotely initiated, automated under-load-testing of the OSGS to occur at regular intervals to verify asset readiness. The paralleling switchgear retains the autonomous ability to provide standby power for utility outages.

As the OSGS is able to be called and monitored by the utility, it can be considered utility interactive. The utility gains use of distributed generation capacity for DR without owning the resource. There are many benefits to a utility when considering the use of customer OSGS for DR:

It is interesting to note the sustainability of using customer OSGS for DR. Heat rates are as good, if not better, than simple-cycle peaking gas turbines and for a given amount of fuel and emissions, system losses are reduced as the generation is sited at the load. Biodiesel and mixtures of diesel/natural gas may also be employed in the OSGS systems. Finally, best-in-class technology can be retrofit to reduce emissions on older equipment that may not be of the present Tier classification regarding emissions. As the highest 15 percent demand occurs approximately for 400 or fewer hours per year (may be as little as 50 hours), operation of the customer’s OSGS is typically minimal yet extremely helpful to the system at peak periods.

Wayne Hartmann is VP, marketing at PowerSecure. He can be reached at whartmann@powersecure.com.